The Tsonga Disco is here!!!

Now after all the hype I have a confession to make. Until a couple of months ago I had never heard of Tsonga Disco, and my collection currently consists of two CDs which I acquired in Cape Town over Christmas. But I flatter myself that it is still probably one of the larger collections outside Southern Africa - but not for long hopefully if me and Madlaks have anything to do with it.

Enough in-depth cultural commentary, on with the music. This slightly nervous-looking chap is Madlaks: 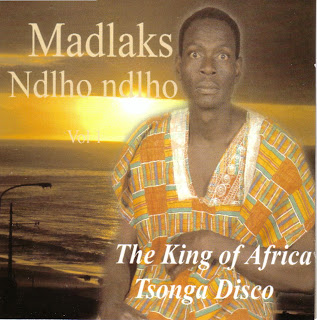 As you will have gathered I'm no expert, but I suspect Madlaks is guilty of exaggeration when he calls himself the King of Africa Tsonga Disco. However I can't deny that he and the uncredited female vocalists have a certain appeal, particularly on this track.

On the inside sleeve Madlaks says his intention is "to take Africa Tsonga Disco to the world", and says "your support in this effort will be highly appreciated". Well I've done my bit, now you do yours - tell your friends.
Tomorrow: the other CD!!
Posted by Ernie Goggins at 19:09