The first part of this post is long overdue. I have been meaning to feature "Checheho", the 2010 album by Aster Aweke, pretty much since it first came out. It is good to finally tick something off my "to do" list, even if it is a couple of years late.

Aster is one of Ethiopia's biggest stars of the last twenty years. Sometimes known as "Africa's Aretha Franklin" - at least according to her press blurb - she manages to update the great Ethiopian soul sound of the 1970s without losing any of its magic. Here are a couple of prime examples. There are plenty more where these came from.

Having the opportunity to introduce some of you to someone like to Aster, and sometimes getting nice comments back, can make one a little delusional. Every now and then I forget I am a fat middle-aged office worker and start imagining I am hip and happening like yer man over at 'Raven Sings The Blues'.

Which I think is why I took myself off to Cafe Oto in Dalston last night to see a triple bill of Sir Richard Bishop (not, I suspect, a real "Sir"), Duke Garwood (pretty definitely not a real Duke), and the untitled, common or garden, Alexander Tucker. Here is an arty photo of Sir Richard wot I done. 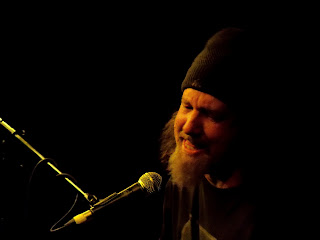 I have never heard anything by any of them before and, while I enjoyed the gig a great deal, mostly it was not the sort of stuff I am likely to listen to a lot at home. However I was sufficiently intrigued by Alexander Tucker to buy his new album, "Third Mouth", which came out on Thrill Jockey earlier this month. I have not had a chance to listen to it yet, and chose this track for you because of its title. Apparently it is about his Dad. Let me know what you think.

As I said, I have nothing by Sir Richard or the Duke. But here is Stevie Wonder with a sort of tribute to the two of them.