We're back after a week away followed by some broadband problems. Hope you are all thriving. I am since I discovered on my return a message from the mighty Helen McCookerybook promising to do us all a copy of "Locked Out" (see the earlier post for the background).

The cultural highpoint of the last week was the Wales Choir of the World concert yesterday at the Royal Festival Hall. Organised by Bryn Terfel as part of Brynfest, it brought together male voice choirs from around the worlds with a combined membership of over 500 people. In the first half of the show the choirs from different continents each performed, and in the second half they performed en masse with the Cory Band and Bryn himself.

It is not the sort of thing I would normally go along to but there was a special reason for being there. Old Father Goggins is a member of the Cape Town Male Voice Choir and they were taking part. Their first half performance, with another choir from Johannesburg, was a newly commissioned piece called "Africa South". I know I am biased, but it was definitely the highlight of the show. Judging by the applause and the comments at the interval and afterwards many other people felt the same.

Here they are in action. My Dad is the grey haired gentleman in red and black in the back row. 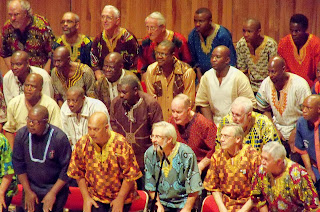 The reason they are all bending over is they are impersonating a thunderstorm. In honour of their performance and the lovely weather we have been having here in the UK, here are some songs.

"Raining For So Long" - Bob Livingston