Monday was a bugger for deaths. Frank Sidebottom and Larry Jon Wilson.

I've been a fan of both of them for many years, and had the great privilege of seeing them both perform, in Frank's case on a number of occasions. Here's a photo I took of him at the Cricketers back in the late 1980s or early 1990s - his Elvis period. 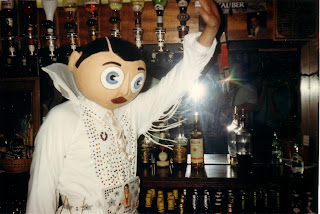 Many of Larry's best moments were vignettes of small town life in the Southern US, while Frank very occasionally mentioned one particular small town in the North of England. They were both one-offs and will be greatly missed. Here are couple of songs from each of them.