For someone whose self-proclaimed mission is to bring Tsonga Disco to the masses, I have been doing a pretty awful job recently. It is time to start putting that right, beginning today. Ladies and gentlemen, we bring you Madlaks. 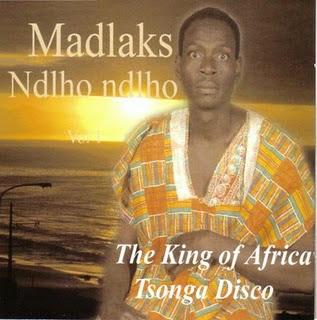 If you are new to this site, a brief recap. The Tsonga people (also known as the Shangaan) live mainly in the north-eastern parts of the Limpopo Province in South Africa and in southern Mozambique. Tsonga Disco is a mixture of their traditional music and, well, disco I suppose.

Depending on who you are listening to the balance between traditional and disco elements will vary. There are those who come from the more traditional wing (the likes of Thomas Chauke and George Maluleke) and those who mix in more of a dance element (these include most of my personal favourites such as General Muzka, Joe Shirimani and Penny Penny - I have three new Penny Penny albums on order which I will hopefully be able to share with you soon).

More recently, a third camp has emerged who have turned the dial right up to bonkers, like those artists featured on the excellent "Shangaan Electro: New Wave Dance Music From South Africa" compilation. Madlaks is in that camp. Here are a couple of selections from his album "Ndlho Ndlho".

Moving on to other news, bargain of the week (at least for our UK readers) has to be on Amazon, where you can currently download Cee Lo Green's "The Lady Killer" for just £3.99. It is already a serious contender for my album of the year. I strongly recommend you go and buy it now. And if you don't want to take my advice, well you know what you can do...