On Sunday I strolled over to Victoria Park for the Apple Cart Festival. The weather was appalling and nine hours of standing round in rain and mud ruined both my trousers and my back. But apart from that a very good time was had by all.

Musical highlights included Billy Bragg, who was in his element as you would imagine, and Bill Wells & Aidan Moffat who ran through last year's album, "Everything's Getting Older", and showed pretenders like Glasvegas exactly how to do the sensitive Scottish hard man thing in a way that comes over as sincere and, at times, really rather moving. And you can add to that list Adam Ant who had a slightly flat start but then strapped on a guitar for an excellent rendition of "Car Trouble" which seemed to energise him, his band and at least the old fart elements in the audience.

There were a couple of scheduling disappointments - the direct clash between Adam and Scritti Politti on the two main stages, and the slightly bizarre decision to put poor Josh T Pearson on last. Why they thought it made sense to finish the night with his high class acoustic miserablism, when everyone is looking to be lifted up rather that brought down, and then put him 100 yards from the very noisy dance tent I really don't know. I would like to see him again in a more sympathetic environment. If nothing else, he takes a mean photo: 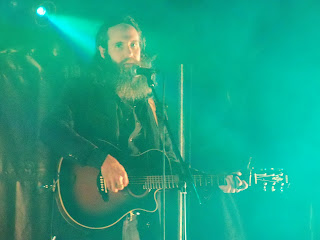 If you are interested there are more photos over on Flickr including all those mentioned above plus Kevin Rowland - whose DJ set was most enjoyable - and Kid Creole & The Coconuts, who did a very good if scandalously short set. My friend Chuck took some solace from the appearance of the current generation of the Coconuts but, with the greatest possible respect, they are no match for the originals.