There wasn't a lot that grabbed me in ReviewShine this month, and I did think about skipping the usual monthly round-up. But then I had a better idea - why not take the opportunity to showcase a few acts that I did not have room for when I first received their albums? So here are three women whose albums made their way to me around the turn of the year, and are all well worth a listen.

First up are Liz Frame & The Kickers, an alt-country outfit whose album "Sooner" came out on Air Age Sound last November. This is what they look like (that's Liz in the middle). 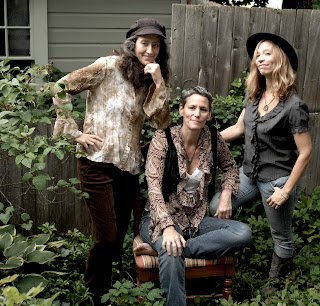 For a change of scene, let's follow that up with some synth-pop from Caithlin De Marrais. Her album "Red Coats" came out on End Up Records, also last November, and is full of little crackers like this.

Last up in our brief "slightly oldies but goodies" section is Simone Stevens' "Right On Time". It is hard to describe her overall style, unless you consider "a bit of everything" to be a style. Highlights include her piano ballad version of Lucinda Williams' "Right On Time" and this next one. I really like the cod 1980s choruses.

The Replacements weren't averse to a bit of folk-twang themselves, in their day. That now makes sense because the paragraph and download that preceded it have been removed by request. But never mind, it's a good tune anyway so don't let a lack of logic put you off.