It's about time we had some more Tsonga Disco up here for you. Today's selections come from another one of the CDs I picked up while in Cape Town earlier in the year. The album is called "Tekani Milawu Vananga" and it is credited to Skadlama. 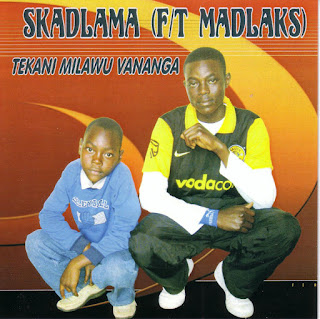 The eagle-eyed amongst you will spot that Skadlama features our old friend Madlaks, whose "Ndlho Ndhlo" album was what turned me on to Tsonga Disco in the first place. He is credited with co-writing all the songs with Pat Hlungwani and the mysteriously named KK, and you will recognise his dulcet tones on a number of tracks.

But neither of these young folks featured on the album sleeve are Madlaks. Possibly one is KK, but which and what the other one is called I haven't a clue. The only "help" (if you can call it that) is on the inner sleeve where is says "Skadlama is the combination of This Time and Gift from Limpopo". So that must be them, although I suspect those are not the names their parents gave them. Whoever is involved, it is a very good record. I particularly like the introduction to the first track below.

It may be that This Time and KK are one and the same, which would be quite spooky. Probably the best known KK in the UK is Kevin Keegan. He sang on the smash hit single by the 1982 England World Cup squad. Which was called...