Cooking Up A Storm

On Wednesday night we went to see the mighty Elizabeth Cook play a solo set at The Lexington in Pentonville Road. She was utterly fantastic, so much so that I very nearly proposed to her on the spot (and would have done if I hadn't been forcibly restrained by Mr F). 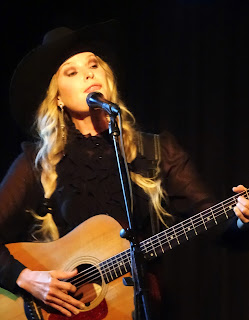 Ms Cook has a great voice, great songs, great stories and bucketloads of charisma. As Mr F says, if there was any justice in the world she would be playing much more prestigious venues than upstairs rooms in pubs. But the other night, for one night only, I was glad there is no justice in the world.

They are all great records, you should buy them all. And you should definitely go and see her if she is ever round your way.

"Sometimes It Takes Balls To Be A Woman" - Elizabeth Cook

The support act was Wade Sapp, who was pretty cool too. His debut album enters the world in July and I'll be checking it out. Until then, here's his first single.
Posted by Ernie Goggins at 05:08