My Kind Of Town

I got back from my little jaunt to North Macedonia on Monday night with a small selection of local CDs in tow. I have not had a chance to listen to them yet but you can be sure that some of them will be featuring here in the near future.

The reason for my visit was to perform at a conference on the banks of the beautiful Lake Ohrid, which is down in the south bordering Albania. I then spent a long weekend in the capital, Skopje. I was last there back in 2007 and there have been quite a lot of changes since.

Visually Skopje is one of the most weird and wonderful places I have been. Large parts of the city were flattened by an earthquake in 1963 and over the next 20 years it was redeveloped by a group of brutalist architects from Japan and all parts of Yugoslavia. So the city is awash with decaying concrete structures from the 1970s and 1980s.

Fast forward to the early 2010s and the Government of the day decided that in order to make Skopje a greater source of national pride they should erect a load of large buildings that were meant to look like they were built in the 1800s. Some do, but mostly they look like the modern knock-offs they are. Many of them are completely over the top, and they don't exactly fit seamlessly next to the brutalist bits.

Then to top it all off they liberally sprinkled new statues in every park and square, on every street corner and on some of the new buildings that are pretending to be old buildings. They even went and built two new footbridges just to put more statues on. The whole place is mad but I loved it.

Here are a few holiday snaps of monstrous carbuncles for you - in order, the university, the central post office and the opera house - followed by a musical selection loosely inspired by the Skopje skyline. 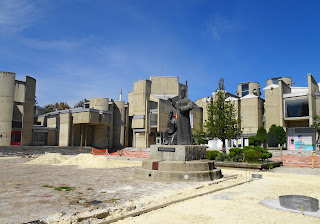 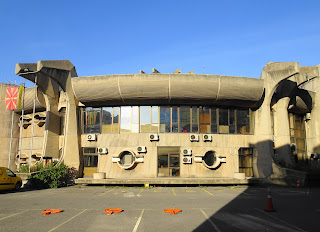 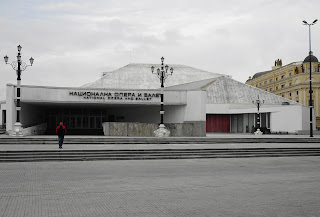 "The Brutal Here And Now, Part 1" - The Spook Of The Thirteenth Lock

"Here I Dreamt I Was An Architect" - The Decemberists