After yesterday's cavalcade of Colombians, we are right back with some more Latin music.

Our old and dear friend Vanessa Lively has kindly tipped me off to "La Americana", the upcoming debut album by Leticia Rodriguez which comes out at the beginning of October on the catchily named Chicken 'n Beanz label. 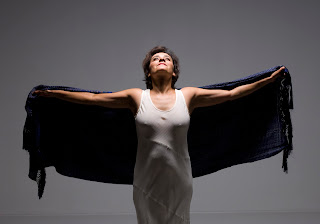 Leticia is from Austin but her music is from all over Latin America. "La Americana" is a collection of covers of standards from Mexico, Argentina, Cuba and Puerto Rico, and ranging from the 1920s to the present day.

My knowledge of Latin music is pitifully weak, so I could not tell you which song is from where and what the different musical styles are. But you don't need to be an expert to recognise good music when you hear it, and this album is jam-packed with it. Here's just one of many examples. I'm guessing Cuba from the piano line and the vocal interchange in the middle of the song, but I'm probably wrong.

Leticia comes from a very distinguished musical family. Her aunt was Eva Garza, one of the first Latin crossover artists and the original performer of some of the songs on the album. She herself is the aunt of Carrie Rodriguez, who may know from her solo work and/or her partnership with Chip Taylor. Here she is with a very nice Richard Thompson cover from her 2010 album "Love And Circumstance".

As for Vanessa, there is good news and bad news. The good news is that if you live in Copenhagen, Berlin or assorted places in the Netherlands she is gigging round your way over the next few weeks - more details on her website.  The bad news is that there are no new recordings in the pipeline. So those of us unable to make it to Die Oude Remise in Bad Nieuweschans on 1 September will have to make do with digging out our copies of "Uncovering Stones", the excellent album she put out last year. Here's a track from that.

As I explained, Leticia Rodriguez's album brings together a lot of Latin standards. It's just a shame she couldn't find room for these two.