I had an excellent day yesterday. The afternoon was spent at the Emirates watching Arsenal thrash Them 5-2, and the evening at the Royal Festival Hall listening to Rodriguez. I have been a fan of his since I was growing up in South Africa in the 1970s, and it was great to get to see him play live at last - something that for many years I never thought would happen. 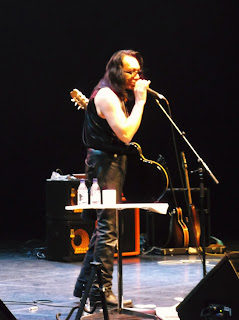 Rodriguez was in excellent voice for a man of 70, but he is a mere stripling compared to the mighty Bobby Bare, who at 77 has just released a fine new album called "Darker Than Light". There was a tendency to dismiss him as a Nashville factory product but there has always been a lot more to him than that, and the passing of time has emphasised the grit and gravel that was always there in his voice.

"Darker Than Light" mostly comprises covers of old folk and country standards plus a few relatively contemporary songs, including an excellent version of this Alejandro Escovedo number.

"I Was Drunk" - Alejandro Escovedo

The stand-out track, however, is one of only two originals on the album. Here it is, with a couple of old favourites.

Here are some clips of the great man in action way back when.