You will all no doubt be familiar with Jonathan Richman and his Egyptian reggae. Well I can't help thinking Jonathan missed a trick by only visiting Egypt. If he had hopped on a boat and kept going down the Nile he would have ended up in Ethiopia, which is not only the Holy Land of Zion for the Rastafarians but home to some fine reggae performers of its own.

Probably the biggest name in Ethiopian reggae at the moment is Jah Lude. Here are a couple of tracks from his current album, "Yachine Neger".

Now we've had absolutely no requests for me to tell you how we got on at Brendan Shine gig earlier in the week but I'm going to tell you anyway. I thought it was great and even the miserable Mr F - who went along in the mistaken belief that he is still young enough to be attending "ironically" - was clapping and singing along by the end. But then who could resist an ending like "Catch Me If You Can", "Clock On The Wall" and "Pub Crawl". 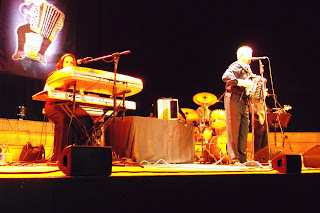 While I could maybe have done without a couple of the more sentimental ballads, it was great to hear Brendan belting out old favourites like "Rose of Castlerea", "Bold O'Donoghue" and "Three Pubs In Bohola". And he did a nifty line in cover versions as well, including Steve Earle's "Galway Girl", Sharon Shannon's "Munster Hop", George Jones' "There's The Door" and this little number.