On Sunday night we went up to the Forum in Kentish Town - somewhere I haven't been for at least twenty years, in the days when it was still the Town and Country Club - to see a man who has been a hero of mine for a lot longer even than that: Mr Bobby Womack.

The gig was originally meant to be back in June, but it was postponed when Bobby was hospitalised with colon cancer and pneumonia. Having successfully fought that, most 68 year olds might prefer to take some time to recover before even thinking about doing anything as gruelling as touring. Not our Bobby.

He was looking good - not that you can tell from this photo, which is the least bad of the ones my cheapo camera took - and sounding absolutely fantastic. 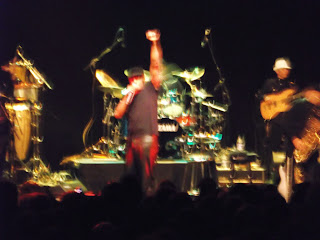 We were treated to two sets. The first featured songs from his new album, the aptly titled "Bravest Man in the Universe", for which he was backed by Damon Albarn and his chums. Very good it was too, but the second set was what I, and I suspect at least 90 per cent of the audience, was really there for.

After the break we got the full soul revue experience - a seven piece band, three backing singers and Bobby in a different leather suit to the natty red one he wore in the first half. Over the next hour we got a whistle-stop tour of some of the highlights of his wonderful back catalogue. There aren't many people who could give you songs of the calibre of "Harry Hippie", "Daylight" and "I Wish He Didn't Trust Me So Much", and then carry on without any drop in quality.

Bobby is playing the Forum again tonight. It may well be sold out, but if not you should really try to get along. And if you can't, you'll have to settle for this selection of my personal favourites that he did not have time for on Sunday.

I don't normally approve of modern music, as you know, particularly when they mess with a classic. But this isn't a bad attempt at Bobby's standard, perhaps because - apart the irritating man with the ear flaps nattering away - they pretty much stick to the original.