Last Friday evening I went to our local church, not for the reasons you are meant to go but to see the mighty Jake Xerxes Fussell in concert. Here he is with the band. 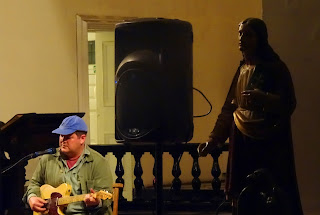 I have been a fan of Jake's ever since I first saw him in 2017 when he was touring his second album "What In The Natural World". There was a much bigger crowd this time round, which was good to see. Not a pew was left unfilled.

Among the many pew-fillers were a surprisingly large number of idiots whooping between tunes. I have no idea why. I love him dearly, but Jake isn't a man you whoop for. Even his best mates wouldn't describe him as a showman - not that it matters in the slightest when he starts picking and singing. It was a very good gig.

Jake's fourth album "Good And Green Again" came out earlier this year. You can find it over at his Bandcamp page, along with his entire back catalogue.

To whet your appetite here is a track apiece from the first three albums - the selt-titled debut from 2015, "What In The Natural World" and then 2019's "Out Of Sight" (which is possibly the pick of the bunch but it is a close run thing). Each tune generated multiple whoops when he played them on Friday.

"Have You Ever Seen Peaches Growing On A Sweet Potato Vine?" - Jake Xerxes Fussell

We'll pause briefly now so gentlemen of a certain age can wipe the mist from their eyes off their glasses in order to see the video clearly.

Ready? All together now, Do The Fussell!