Yes, that's right. Today we are featuring another one of the CDs I picked up on my recent visit to Skopje. It is something a bit different from our normal fare, let's see what you make of it.

When I asked my local contacts which traditional musicians to check out a number of them mentioned Esma Redžepova, also known as the Queen of the Gypsies. Once voted one of the 50 great voices of the world, she was quite a woman - as you will gather if you read her Wikipedia entry.

Esma made a fair few records over the course of her 55 year recording career which ended only with her death in 2016. I chose this one mainly because of this striking cover but also because it contained two albums for the equivalent of about £3, Under the photo you'll find one track from each. 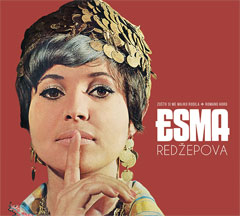 I was surprised to discover that Esma was involved in a minor Eurovision controversy later in her career. In 2013 the Macedonians recruited her to the cause and teamed her up with a slip of a lad called Lozano. The song they were originally going to perform had to be replaced as it was blatantly pushing the agenda of the very nationalist government of the time and the Skopje 2014 project I mentioned in an earlier post.

We will never know how the original would have fared, but with the replacement tune they battled their way to a plucky 16th out of 17 in the second semi-final. See if you can work out from the videos which song is which.