I had expected to go to two gigs over the weekend. I ended up going to three.

On Saturday night we went up to Cafe Oto in Dalston to see a solo set from Meg Baird. 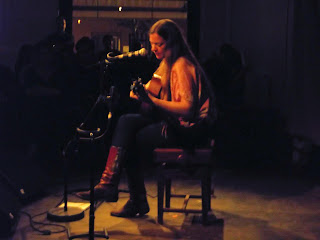 Meg did what she does best, and very pleasant it was too. But between her and the support act we got barely 75 minutes of music, so I was left feeling a little short-changed.

We wandered round the corner to the Victoria for a late, and rather cheaper, drink, only to discover there was a gig going on there too. We arrived just in time to see the headliners, Black Manila, who are part of what seems to be a burgeoning "garage revival" scene. They would benefit from a better singer in my humble opinion, but they weren't bad.

Sunday was a class apart though. We were down at the Barbican to see the revived Dexys touring "One Day Going To Soar" which, if not quite the flawless masterpiece some critics would have you believe, is definitely one of my favourite albums of the year to date. I missed out on seeing them first time round, so I was doubly looking forward to the show for that reason.

They did not disappoint - it was just as bonkers and brilliant as I had hoped - and clocking in at just over two hours they showed the young people how to put on a show. Kevin Rowland is in fine voice for a man in his late 50s, and it was great to see him and other old stagers like Pete Williams and Big Jim Patterson having a whale of a time. And getting to hear personal favourites like "I Love You (Listen To This)" and "Tell Me When My Light Turns Green" was a real bonus.

Here's a track from each of our acts, all of them released this year. The Dexys track is from "One Day I'm Going To Soar". Meg's comes from "Oh Michael, What Have You Done", the Michael Chapman tribute album we have featured here before. And "Fiasco" and other Black Manila tunes are streaming on Soundcloud.

Where have the last thirty-two years gone?