Excellent show by John Murry (with help from Michael Mullen) in the Birkbeck Tavern last night. It was a real privilege to see someone of that calibre in a local pub. It was something a bit special, but then you come to expect that from Steve and Ali. Sadly it was one of the last gigs they will be hosting in the Birkbeck as their tenancy finishes at the end of the month. Those of us who have been with them since the Sheep Walk days wish them well - fingers crossed they will pop up somewhere else before too long. 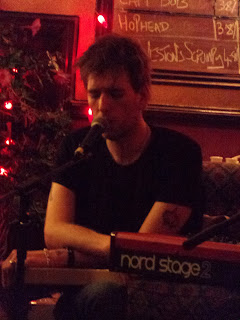 My extensive research - i.e. reading the bio page on his website - has revealed that Mr Murry is the grandson of William Faulkner, which gives me the perfect excuse to dig out an old favourite from Tom Russell. Also that Mr M was born and raised in Tupelo, Mississippi. Having done a fair bit of hell-raising in his time, it is not beyond the realms of possibility he spent a night or two in the county jail there. Tupelo's best-known son is, of course, Elvis.

Speaking of Presley's, we round things off with a tribute to one of Wiltshire's finest - Reg Presley, who sadly left us yesterday.