A Little Me Time

Before we get to the post that I had already prepared for today I want to give another quick plug to Ghost Woman. Last week I mentioned their self-titled new album that comes out on 1 July, and on Monday I went to see them on the first date of their short UK tour. Many thanks to John at Force Field PR for sorting out the ticket. 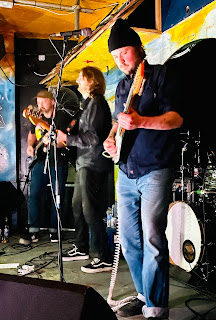 They are a very good live band, a fair bit heavier than on the record. The guitarist had a Crazy Horse T-shirt on which gives you the general idea. Its a shame the sound wasn't a bit better, although in an odd way the muddy mix quite suited them. They are playing in Leeds, Glasgow, Liverpool and Brighton over the next week or so. If you get the chance, pop along.

Now back to our scheduled programme.

While I was on Bandcamp last Friday I decided to do whatever you call the Bandcamp equivalent of googling yourself. I discovered three tracks called "Goggins". One of them is a very tedious instrumental so I have spared you that, but here are the other two. Many apologies for Cousin David's language.

At the risk of sounding like a diva, I'm not convinced they have done me justice.