Me and my friend Mister F went to an excellent little gig last week. In the basement of a local pub, three bands for £7.50 including one old favourite and one new discovery who I will definitely go and see again if they are in the area. The sort of night that reminds you of why live music can't be beaten.

The old favourite was Piney Gir, who has featured here on a couple of occasions before. The last time I was due to see her they announced a lockdown on the morning of the show, but there were no hitches this time. Piney and the band were clearly having a blast, as were we. 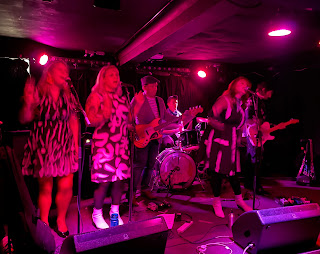 The new discovery was one of those bands with a vowel disorder, BCOS RSNS. I am sure they have good rsns for dropping the vowels and putting the name in capitals but I didn't ask what it was. I don't know whether the live four-piece line-up is a permanent one - their EP only features two of them - but I hope so because they sounded very good together, with a lot more oomph than on record. 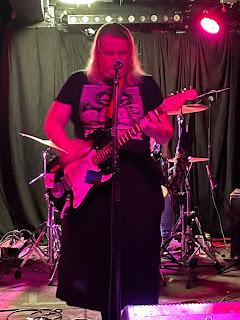 Rounding out - and topping - the bill were Breakup Haircut. They were pretty good as well with a lot of pop-punk energy. All in all, a very good night.

Piney has a new EP out called "Alchemy Hand", and the Haircuts (or possibly the Breakups) recently released their debut album "Punk Dancing For Self Defence". BCOS RSNS only rcrdng to date is an EP released in 2020, but the singer told me they hope to do more soon.

You can find all these releases, and in Piney's case her extensive back catalogue, at their respective Bandcamp pages. To warm you up, here is one from each of them (streaming only as it is new stuff).

"Am I Revolutionary Yet?" - Breakup Haircut

The live music odyssey continues tomorrow when we are off to see Mr Tony Christie sing the songs of old Ireland. No, we really are. I am sure it will be a grand night. Here he is last year with a few of his non-Irish hits.