Our local second-hand record shop has a couple of boxes tucked away in the corner containing CDs that are priced at £1 each or £5 for 10. Once a month or so I pop in for a rummage. Sometimes there's only trash, but sometimes there's treasure.

Last week's visit yielded treasure with a capital T. Someone who either sends or receives promo CDs had dropped a load off and in a matter of moments I had picked out six albums that I definitely wanted.  This put me in the position of needing to find four more in order to reduce the overall price.

That in turn gave me the freedom to select artistes and albums I knew nothing about - there was nothing to lose and £1 to gain. So that is what I did. One of the four I chose had no information on either the cover or the CD itself  It looked like this: 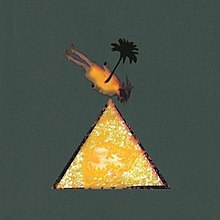 I was delighted to discover when I got home and slipped the disc into my CD drive that I had acquired the self-titled debut album by Melt Yourself Down, who have described their music as "Nubian inspired party-punk music". I don't know what if anything that means but if you think Pigbag meets Omar Souleyman then you'll have a rough idea. Anyway, it is a rather splendid racket that I imagine may sound even better live.
The album came out in 2013 and you can find it and the 2016 follow-up "Last Evenings On Earth" on their Bandcamp site. The Melts have since released a couple more albums but they are on Decca so you'll have to go to less reputable websites to find them.
"We Are Enough" - Melt Yourself Down
"Kingdom Of Kush" - Melt Yourself Down
When you've listened to those tracks try playing the two videos at the same time to see whether my description holds up.
Posted by Ernie Goggins at 07:49