Leeds in the late 1970s and early 1980s was a hotbed of post-punk and gothic rock. Well we call it that now. At the time my late grandmother called it a dreadful racket, because there were no proper tunes and it was all just bang, bang, bang.

One of the many bands to emerge from the fetid swamps of the Leeds scene were Red Lorry Yellow Lorry, who had a string of hits on the NME indie charts between 1982 and 1989. I can't claim to have been one of their most devoted fans but they had their moments. Here are two of them.

Special prize for the first person to identify the link to the video.

In unrelated news, earlier in the week we went to the delayed launch party for Bas Jan's "Baby U Know" album, which I have raved about here before. It was an excellent show and if you get the chance to see them I would recommend it. And you should buy the album of course. 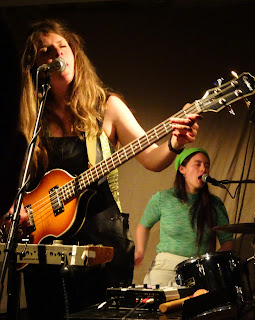 Happy Easter, folks. Go easy on the eggs.
Posted by Ernie Goggins at 07:11