For no particular reason, here is a little tribute to Iggy Pop: a song he covered, two covers of his songs, and an excellent collaboration.

"The Passenger" - The Jolly Boys

"I Wanna Be Your Dog" - Big Snow Big Thaw

Rather more successful than this collaboration, in my humble opinion.

I picked up a job lot of Brazilian CDs in Brick Lane yesterday - 7 for £5. If the first one is anything to go by I have got a real bargain.

The album in question is "Baião de Viramundo", and it is a tribute to Luiz Gonzaga, the "king of baião" whose recording career lasted nearly 40 years up to his death in 1989. The album itself came out in 2000.

"Baião", as all of you familiar with Wikipedia will know, is a rhythm from North East Brazil usually played on a zabumba, a flat, double-headed bass drum played with a mallet in one hand and stick in the other. "Viramundo" translates literally as  something like "turning world". By coincidence it is also the title of a  new documentary about another baião master, Gilberto Gil.

We will start you off with Luiz himself, so you can see how it is meant to be done, followed by a couple of tracks from the compilation. I think it is fair to say they did not feel too constrained in how they interpreted the brief.

From Gonzaga to Gonzalez. My friend Winston's sister used to go out with the lead singer, so they are virtually family.

I was passing through Tavistock earlier in the week, and had time to kill while Old Daddy Goggins was getting his hair cut - it is a long and not very interesting story - so I did a quick tour of the charity shops.

Guided by the spirit of recent birthday boy, Charity Chic, I picked up a couple of CDs to share with you. I have not had a chance to listen to them myself yet, so I am relying on you to tell me whether these tracks - selected at random - are any good.

The first album was "Beyond The Sun" by Billy Mackenzie, the record he was working on at the time of his suicide in January 1997 which was tidied up and released later that year. The second was Rod Stern's "Give It Up For Rod Stern" from 2006. Apparently Rod is/was the alter ego of the former bass player with the Sultans of Ping. At that level of fame, you can understand why he felt the need for a nom de plume.

"Blue It Is" - Billy Mackenzie

Here is Yvonne Elliman, expressing a similar sentiment to Rod but in a more grammatically correct way.

I'm off on my hols tomorrow, back in ten days or so. I'll leave with you a selection of songs I featured in the first few months of 27 Leggies' existence that are worth another listen.

There is all sorts in here: Singapore 1960s beat, African reggae, Trini soca, Spanish rumba, British samba, Welsh folkies and some old hippy nonsense. One of these tracks has a particular significance for this blog. The first person to work out which one it is and why will get a prize of some sort.

I'm off to tropical Devon. They have tors rather than volcanoes, but when the fracking starts, who knows?

Do you think this lot had been listening to George Harrison when they recorded this back?

Eagle-eared listeners may have spotted that, despite their very English surnames, Greenfield and Cook sing with heavy Dutch accents. That is because they were heavy Dutch dudes, real names Rink Groeneveld and Peter Kok.

"Don't Turn Me Loose" was deservedly a big hit in the Netherlands in 1972. Nearly fifteen years later another Dutch duo, Lucien Witteveen and Sven Van Veen, had an even bigger smash.

Regular readers will know that is a sign I am off on my summer hols. I don't actually go until Friday and I will try and squeeze another post in before then, but I thought I should bank Mike G and Sven now just in case I run out of time.
Posted by Ernie Goggins at 20:29 1 comment:

New record alert!!! The ever-groovy Sonny & The Sunsets have recently released "Antenna to the Afterworld", an album that was apparently inspired by Sonny Smith's visit to a medium who put him in contact with a dead friend. It is a good listen all the way through, but probably the stand-out track is the closer, "Green Blood", which tells the tale of Sonny's affair with a space lady.

Of course, Sonny is not the first earthling to have fallen in love with someone from another planet. Rock and roll is littered with the victims of doomed inter-planetary love.

And if you are wondering how I came up with the particularly poetic title for this post, truth be told I nicked it from the poetic Mr Prophet. 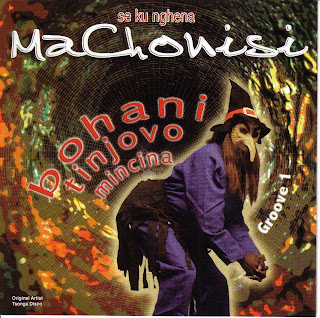 That's right, folks! It's a jumbo selection of groovified nursery rhymes. Rather than lose those of you with attention deficit disorder or other so-called "conditions" that didn't exist when I was a boy, let's get straight on with the show.

Here's a modern nursery rhyme for you. All together now. 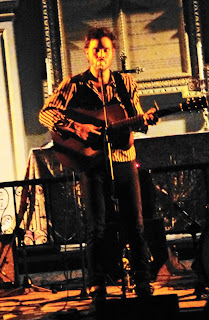 This week is awash with gigs. After three in a row, I have got two nights off for good behaviour before heading out to see Simone Felice play in a church on Thursday. I'll report back on that later.

On Saturday we went down to the 12 Bar Club to see punk-poet Patrik Fitzgerald, as the evidence below makes clear. It was the first time I've seen him play live for the best part of thirty years, and his style and subject matter hasn't really changed. Which is a good thing. 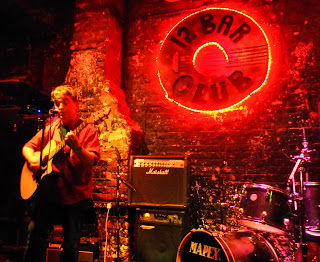 Last night I was at the South Bank to see Tift Merritt and classical pianist Simone Dinnerstein promoting their new album. I was a bit in two minds beforehand. I have been a big fan of Tift's since she started out, but classical music has never really done it for me. But while there were a couple of moments where I found my attention wandering, it was only a couple. Overall they seem to have found a way of merging their styles and influences that works very well. 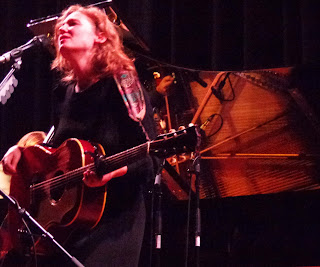 But with all due respect to Patrik, Tift and Simone, the stand-out gig was on Sunday at the Electric Social in Brixton when True Identity launched their new EP, "Coming Home". 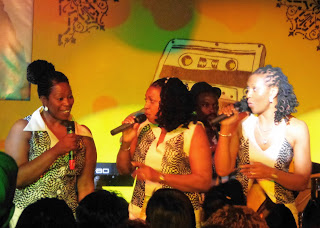 Individually True Identity are Joanne, Rowena and Pam (who am I honoured to call a friend); collectively they are a top-class reggae harmony act. Having supported any number of big names over the years, a record of their own is long overdue.

The EP is not commercially available yet. I'll post details here when it is, but in the meantime you can check them out at Reverbnation. The only track there that is on the EP (in a new, improved mix)is "Fav'rite Room". That and the title track - both originals - are instant classics in my view.

Other tracks on the record include "Up Close And Personal", a medley of these three tunes.

Joanne is normally the lead singer, but the other two takes turns occasionally. One of the highlights of their set on Sunday was when Pam stepped up to the mike for a fine version of this old standard from the 1980s.

Special mention should also go to The Blackstones, whose all too short PA on Sunday night was the perfect warm up for the main attraction. Their version of "Ain't Too Proud To Beg" was particularly good, although nothing tops the original.