As we all know, there are times when nothing suits the mood except vintage Somali disco music. If this is one of those times for you, you're in luck. Here are a couple of hip-wiggling hits from the magnificently titled "Mogadisco: Dancing Mogadishu (1972-91)".

"Mogadisco" was released last year on the always excellent Analog Africa label. Among many other triumphs, Analog Africa were responsible for drawing the world's attention to the band with the greatest name ever in the history of great band names. Click on the link and see if you can work out who I mean. Then buy their album. And "Mogadisco".

And then, when you've finished checking up your head, don't forget to check up on your baby.

The guitarist in that clip is one Jesse Ed Davis, whose version of Van Morrison's "Crazy Love" was featured in our recent "Single Song Sunday". By happy coincidence, Van is equally diligent when it comes to checking on things.
Posted by Ernie Goggins at 07:51 2 comments:

Two Sides Of The Story

I don't know about you, but I can't help thinking there may be some history between Denise and Geater.

"Why Does Is Feel So Right" - Denise LaSalle

"Why Does It Hurt So Bad" - Geater Davis

Posted by Ernie Goggins at 07:36 No comments:

Very sad to learn over the weekend of the death of the great Jerry Jeff Walker, one of the founding fathers of the Texan outlaw country scene.

I saw him live while on a work trip to the States in the mid 2000s. When I found out he was playing in the area I extended my trip by a couple of days so I could go along. I was richly rewarded - not only was it a great show but I got a chance to chat to Jerry Jeff and Bob Livingston of the Lost Gonzo Band afterwards. A memorable night. RIP Mr Walker.

It has been a while since we had a Single Song Sunday. Let's rectify that with Van Morrison's "Crazy Love".
I've taken an executive decision not to include Van's original. He and his people get agitated about that sort of thing, and he is already highly agitated about Covid-19, lockdown and the like. I would not want to be responsible for tipping him over the edge.
So instead we'll kick things off with Jesse Ed Davis, a Native American session man who hung about Leon Russell, as you may be able to tell - his version has a certain Leon feel to it. It came out in 1970 and, as far as I can tell, may have been the first cover version to be released.
Also released in 1970 was Esther Phillips' version. Esther did Van's "Brand New Day" around the same time, and that is well worth checking out. I suspect whoever arranged Rita Coolidge's rendition in 1971 may have been listening to Esther judging by the guitar work on the two versions.
We follow Rita with two soul dudes, Nolan Porter and Eddie Floyd, and then we're off on a mini-tour of Europe - I'm clearly struggling to let go - which takes in Croatia, the Czech Republic, Finland and Italy. All four artists have appeared here previously, Helena Vondráčková as a member of The Golden Kids, the others in their own right.
We end as always with the Mandatory Reggae Version, but with a twist - it's Japanese reggae! You can find it along with many other gems on the evocatively titled compilation, Jap Jam International Volume 3.
"Crazy Love" - Jesse Ed Davis
"Crazy Love" - Esther Phillips
"Crazy Love" - Rita Coolidge
"Crazy Love" - Nolan Porter
"Crazy Love" - Eddie Floyd
"Život S Njim" - Josipa Lisac
"To Se Ti Pouze Zdá" - Helena Vondráčková
"Rakkauden Sain" - Kirka
"Amore Pazzo" - Furgone di Piufiglio
"Crazy Love" - Sister Kaya
Posted by Ernie Goggins at 09:08 2 comments:

Last time out we featured a single called "U". How better to follow that than with an album called "U", especially when its by one of my all time favourites, the Incredible String Band.
"U" is a double album that was first released in 1970. It is the studio version of a stage show they put on with dance troupe Stone Monkey. Apparently there was a plot although you can't tell that from the album - or from the show itself, according to the few who saw it. Possibly one for the fans only, but I'm a fan so I can't judge.
"Queen Of Love" - The Incredible Strong Band
"Puppet Song" - The Incredible String Band
I can't find any clips from the "U" era, but here are the lads a couple of years earlier on the Julie Felix Show. Marvellous stuff.
Posted by Ernie Goggins at 05:48 No comments:

We finally finished our musical tour of the EU last week, which featured 133 songs from 27 countries. For a brief period we are making them all available at the link below. There truly is something for everyone, and very possibly a few things for nobody (Yes, I'm looking at you, Absymal Torment from Malta).

The Long Goodbye: The Complete Series

There is a big gaping hole in the middle of Continental Europe that we skirted round on our tour  without going in - Switzerland. To plug the gap, here are two tracks from my favourite Swiss band, one under each of their names. Dig the groovy whistling on "Die Matrosen", its like The Raincoats teamed up with Roger Whittaker.

Out on the unvisited fringes we find Iceland. If all was well with the world they would have romped home at this year's Eurovision with this splendid piece of pop.

Scott Of The Anarchic

A bit of Scott Walker for you today. Both tracks can be found on an excellent compilation called "Boy Child 67-70". Any resemblance to current events real or imagined is entirely coincidental.

Posted by Ernie Goggins at 06:46 No comments:

I am contractually obliged to include that video in the post. There is one more contractual obligation to come right at the end.
It is not an obligation but a great pleasure to thank two individuals who contributed greatly to the series. The first is the excellent Asthmatic Harp, who guest hosted the Danish leg of the tour way back in April. The other is the equally excellent George, who gave us his unique take on the Portuguese music scene and contributed a few tracks to other posts along the way. Thank you both.
Sweden is a great place to end the tour, having been responsible for so much magnificent music over the years. And Rednex. So let's go out on a high. Take it away, Little Gerhard!
"Into The Go-Go Groove" - Little Gerhard
"She's Having A Baby Now" - The Tages
"Oje Brudmarsch" - Monica Tornell
"Den Gamla Vanliga Historien" - Turid
"Staten & Kapitalet" - Ebba Gron
"Would You Say Stop? " - Acid House Kings
We'll bring things to an close with our other contractual obligation. From everyone here in Leggiesland, thanks for sticking with us. And to all of you out there in Europeland, thank you for the music.
Posted by Ernie Goggins at 06:07 11 comments:

The Kids Of Today

Young people, eh? What are they like? Coming round here with their long hair and loud music and lack of prospects.

"Who Do You Think You're Foolin'" - Disillusioned Younger Generation

Yet another winner from the magnificent folks at Sahel Sounds for you today. This time it is "This Is Kologo Power!", a compilation from Ghana featuring the kologo, a local two-stringed lute. First released in 2016, it is still available on their Bandcamp page along with many other fine albums.

"I Have Something To Say" - Atimbila

Here is some more from King Ayisoba, possibly my new favourite king. You can find his album "1000 Can Die" on Bandcamp too.

Eric B and Charley P

If you are one of those people who take a logical approach to cataloging your record collection, it is highly unlikely you would put Eric B & Rakim next to Charley Pride. Fortunately the good folks who run the pet rescue shop in Ramsgate take a more laissez faire approach. I was down there earlier in the week and found Eric and Charley's respective greatest hits collections nestling next to each other. At just 25p each I didn't need to decide between them, I snapped them both up.

"A Shoulder To Cry On" - Charley Pride

J.C. Lodge is a big Charley Pride fan, taking this version of one of his old hits to number one in the Netherlands back in 1982. I wonder if she ever pops down to Ramsgate?

Very sad to learn that the great Bunny 'Striker' Lee has died at the age of 79, without doubt one of the greatest and most influential producers there has ever been Here is a tiny selection from his phenomenal back catalogue. RIP Mr Lee.

"My Conversation" - The Uniques

"Gorgon A The Ginegog" - Cornell Campbell

"Minstrel And Queen" - The Blackstones

Posted by Ernie Goggins at 17:55 No comments:

It's the penultimate leg of our EU tour and we're off to sunny Spain. Y Viva Espana! We're taking the Costa Brava plane to El Quarantina etc.

I always enjoy visiting Spain and I have had many memorable nights there over the years, including one that indirectly led to me becoming buddies with Mama Coconut through these very pages. I would link you back to the story that prompted her to get in touch but after searching for it for nearly five whole minutes I gave up.

Instead, on with the show. There are many mountain loads of marvellous music from Spain. Here is a very tiny fraction of it.

"Me Sabe A Humo" - Los Chinquitos

One of the memorable nights I alluded to occurred about four years ago. My mate Rich and I were visiting bars in the Lavapies district of Madrid when we met the legendary El Rumbero de Vallecas. That's him on the left and Rich on the right. 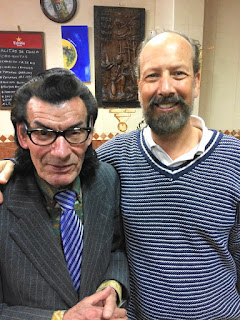 Former professional singer and multiple winner of Spain's annual John Cooper Clarke lookalike competition, El Rumbero now performs in the bars of Lavapies accompanied by his son on guitar. And very entertaining they are to, as the first of today's videos demonstrates.

Today we have some top pop tunes from Kampala's King of Kool, Dr Jose Chameleone. Unlike other chameleons, he is not very good at blending into the background.

Posted by Ernie Goggins at 01:39 No comments: