I have lured you in under false pretences. We have no huffin' or puffin'. Nor, for that matter, do we have any stuffin' or bluffin', or even chuffin'.

But that doesn't mean we have nuffin'. Here are three Ruffins and two Muffins.

"Walk Away From Love" - David Ruffin

Posted by Ernie Goggins at 08:34 No comments: 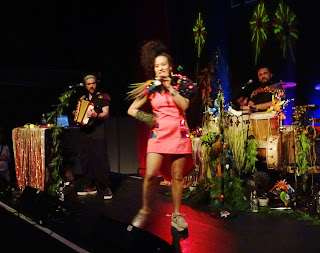 Some French freakbeat from 1966. I'm not sure what they call it in France. Probably just "le freakbeat", although "le cadence de caprice" has a nice ring to it. I might copyright that.

Anyway, these people are all impostors. Erick's real name is Patrice Raison, and he has nothing to do with Yves at all. And as for the other five, they are clearly no gentlemen.

While trying to select a video to go along with these tracks, I had a look at who was in the French charts in 1966. One of the biggest stars was Sheila, who had three number one hits that year (and many more before and after). By 1979, she was doing this sort of thing.

Posted by Ernie Goggins at 07:28 No comments:

You can't beat a bit of King Stitt in the morning.

Posted by Ernie Goggins at 07:57 No comments:

Being a proverbial S of the Z as I am, I get sent loads of new music - sadly, much more than I can ever get round to listening to. So the tracks that follow are not necessarily the best new records I've been sent, but they are among the best of the fairly small percentage I've had a chance to play.

Taking them in alphabetical order, we start with An American Forrest (real name Forrest van Tuyl). For reasons best known to himself the album is called "O Bronder, Donder Yonder?" and it comes out on 10 May.

Next is the only one of today's gang who has featured here before - in fact, the only one of them I had previously heard of  - Congolese whiz kid Baloji. His new album, "Kaniama: The Yellow Version", is some sort of reworking of last year's album with a similar name and is out on 3 May.

Third in line are Elva, featuring Allo Darlin's Elizabeth Morris and one or more Norwegians. This is the title track of their album that came out yesterday, and very nice it is too.

I'm unlikely to sit through the whole of Flamingod's "Levitation" album (out 3 May) again, as most of it isn't really my sort of thing. But who can resist a tune apparently named after Turkish psych guitar god Erkin Koray and performed by a bunch from Bahrain in a style that combines The Beloved and Steve Hillage? Not me.

In fifth position alphabetically is Susan James. The album is called "Sea Glass" and it is co-arranged by Sean O'Hagan of Microdisney and High Llamas fame. Perhaps as a result there is fair bit of Van Dyke Parks and Judee Sill in the mix, although not so much on this track. You'll have to wait until 6 June to pick up this one.

Last but by no means least is Daniel Norgren. He's a Swede who's a pal of Phil Cook (of Megafaun, Hiss Golden Messenger and himself). I don't think Phil plays on the album ("Wooh Dang") but you can hear some stylistic similarities. The album came out yesterday, and this track is also available as a single.

Also out later this month is "Seeing Other People", the new album by our old friends Foxygen. It's good but it may divide the fanbase as it controversially updates their sound. Some tracks sound like they might have been recorded as recently as the early to mid 1980s. Rather than get forced into taking sides, let's all enjoy one of their hits from the 1970s (a.k.a. 2017).

A couple of tracks today from the smoothest dude in all of Dude Town, Mr George Soule. Both come from his 2006 album "Take A Ride".

George pronounces his surname So-Ley. This may be a tribute to him.

This time out on Single Song Sunday we have an old standard that has been recorded by at least three million artists in the 60+ years since it was written: "You Don't Know Me".

The first recording was by country star Eddy Arnold, who co-wrote it with Cindy Walker in 1955. The first hit version was by Jerry Vale the following year, but it is terribly cheesy so I am sparing you that. The classic version - and one of my favourite records of all time - is the one by Ray Charles, which made the Top Ten in both the US and UK in 1962.

You will have heard of most if not all of the other artists featured I expect - we've not exactly gone for the obscure stuff here. The Mandatory Reggae Version comes courtesy of The Heptones.

Many of us have probably found ourselves in the same position as Eddy, Ray, Patti and all the rest at some point in our lives. I know have. I thought of dedicating this post to the oblivious lady concerned using the standard formula for anonymous dedications, "they know who they are". But of course she didn't, so that would not have made any sense. Feel free instead to dedicate it to whoever you see fit.

"You Don't Know Me" - Jackie Wilson

"You Don't Know Me" - Emmylou Harris

"You Don't Know Me" - Willie Nelson

"You Don't Know Me" - Allen Toussaint

"You Don't Know Me" - The Heptones

Great excitement here in Leggies Land. Yesterday we had our first ever visitor from Burkina Faso. To welcome our new friend into the fold, and to entertain you all, here are some of the sounds that get the Burkinabe boys and girls bopping.

A couple of tracks tonight from one of my favourite compilation albums of all time. "Achilifunk: Gypsy Soul 1969 - 1979" came out about ten years ago on the Madrid-based Lovemonk label. It is a mildly unhinged romp through the halcyon years of Rumba Catalana.

You can download or order a CD of the whole album from Lovemonk's Bandcamp page, and you really should. To whet your appetite, here's a couple of corkers.

Posted by Ernie Goggins at 20:39 No comments:

Saddle up your squeezebox, compadres, we're heading "South of the Border". That's the name of the compilation album these gems come from. I imagine there are probably hundreds of Tex-Mex compilations out there with the same name, but you can have plenty of fun while you're looking for the right one.

These top tunes also give us the perfect excuse to feature the Texas Tornados, and a little extra Freddy too. Not that you ever need an excuse for either.

As all good conspiracy theorists will tell you, the Internet is secretly controlled by shadowy forces that try to dictate what you hear and what you think.

One of the most powerful of these Internet Illuminati is an entity calling itself George (its real identity can only be guessed at). At first it restricted its activities to the comment boxes of assorted music blogs, but it has recently become much more blatant in its attempts to influence. For example, it has infiltrated the Charity Chic blog to the extent that it now has a weekly column there, spewing forth foul propaganda about assorted American states.

It pains me to report that I have now been targeted by The George, which has sent me a copy of a compilation album called "Hillbillies in Hell: Country Music's Tormented Testament (1952-1974)". I always thought that if this day came I would be strong enough to resist. Unfortunately I am too weak-willed to do so, and the music is too excellent not to share. Here are a few of the highlights.

"Which Way You Going?" - Jerry Jericho