Last time out I recounted how I had found myself at a very good gig due to mistaken identity. It was at an even better gig earlier in the year that I acquired a pretty decent CD by the same process.

After watching the legend of Latin soul that is Joe Bataan I went over to the concession stand where Mr Bataan himself was in charge of proceedings. I asked him which CD he would recommend, he thrust one at me, I handed over my money and moved on to make way for the rest of the queue.

When we got to the pub round the corner I had a look at it. Turned out it wasn't one of his albums at all, but a compilation called "Gozando With Chico Volume 1" to which he had contributed a couple of tracks. These aren't them. The album as a whole is pretty mellow, but that is no bad thing on a Sunday afternoon.

"Going To Call You" - Mestizo LA

Posted by Ernie Goggins at 17:28 No comments: 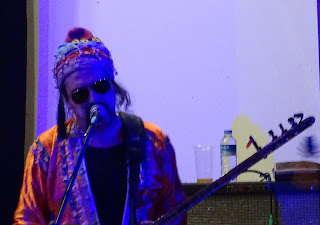 Tonight Mister F and I are off to deepest Dalston to enjoy - or very possibly endure - some modern Turkish psychedelia. I will report back in due course.

In the meantime here are a couple of tracks from a compilation called "Hard To Explain", which features what the blurb writer calls "funky blues" from the late 1960s through to the early 1980s.

The title track is the pick of the bunch, and we follow it up with some outrageous bragging from Freddie Robinson. I asked some ladies I know if I should adopt this as my theme song. The consensus was that I would need to drop the "er" to make it fit.

It has been far too long since we have featured our rhythmic raison d'etre, the old Tsonga Disco. We will be putting that right soon, I promise. Tonight we'll take you halfway there with Brian Bomba, a Tsonga singer whose style is more pop and (what the young people mistakenly call) R 'n B than the stuff we usually feature. Some tracks on his 2014 album "Tsalelani" are a bit bland for my personal taste, but there is some good stuff in between. Like these two. Listening to "Nwa Gezani" is like taking a trip back to the 1980s.

Posted by Ernie Goggins at 19:55 No comments:

I mentioned a couple of posts back that I had acquired a job lot of "Rough Guides" CDs in a charity shop in Canterbury - luckily the Garden of England is not on Charity Chic's normal route so some things are left for the rest of us to find.

One of the CDs was the edition devoted to Brazilian psychedelia. Some of it is barely psychedelic in the way I understand the term, and there is a fair bit of self-indulgent twaddle, but there is enough good stuff on there to make it worth the investment. Like these two tracks.

A small and woefully inadequate tribute to Mr Toussaint, who died yesterday. He wrote these great songs and many more, and produced an even greater number of fantastic records.

"Sneakin' Sally Through The Alley" - The Mighty Diamonds

I dropped into a few charity shops while in Canterbury earlier in the week, and in one of them I found somebody's discarded collection of "Rough Guide" CDs. As they were a pound a pop I bought a few, and can particularly recommend the Haiti compilation, from whence these tracks came.

I tried to find a clip of Steely Dan performing "Haitian Divorce" but failed. Never mind, though, because this is much better. Here is Steely Jam, live in front of a small but privileged audience in Playa Vista, CA.

Finding myself at a loose end yesterday morning I decided on a whim to pop down to Canterbury for the night. Very nice it was too. I can recommend wandering round the cathedral cloisters after dark if you like a bit of the old atmospherics.

When I got home this afternoon I decided to dip into my collection of artefacts from the "Canterbury Scene" for today's post. It is not a big collection as, for me, much of the stuff created by the Scene falls firmly into the "tedious twaddle" camp. There are some honourable exceptions though.

"Place Of My Own" - Caravan

I spent the night in an excellent Shepherd Neame pub called The Miller's Arms. And we all know what happened when the miller told his tale.

What better way to see in November than wrapped in the warmth of some loving arms? The song of that name was written by Tom Jans and first recorded by Dobie Gray in 1973. Tom released his own version in 1974, when most of the rest of the world decided to do the same thing.

Dobie's version is probably still my favourite, although Millie Jackson has a good claim on the title as well. Actually, all of these are pretty good. We have doubled up on the Mandatory Reggae Versions this week. Hortense Ellis copies Millie Jackson, even down to the introductory rap, but good old Winston Curtis lopes along nicely.

It is surprisingly difficult to find videos of people performing "Loving Arms" but I did stumble across this clip of Piet Veerman (of Dutch pop legends The Cats) and his granddaughter. They make a nice job of it.