I'm still rebuilding my music library after my IT disaster, and still rediscovering things that I haven't heard in years. Today's find is St. Thomas. Real name Thomas Hansen, St. Thomas was a Norwegian singer-songwriter who died in 2007 at the age of 31 - but not before making some charming records.

As far as I can tell this St. Thomas was no relation to the 13th century theologian and philosopher, St. Thomas Aquinas, author of the 'Summa Theologiae'. And speaking of Summa...

I went to an excellent gig last night down in Swingin' Streatham at the Hideaway - a new venue for me, but one I'll definitely be going back to.

The star of the show was UK reggae stalwart Lloyd Brown, backed by the excellent RiddimWorks Band and my good friends True Identity on harmonies. We also had a couple of guest spots from Paulette Tajah - pictured here with Lloyd - and Michael Gordon. All of them were in fine voice. Mr Brown is a real showman, and during the course of two and a half hours or so we were royally entertained by him and the rest of the gang. 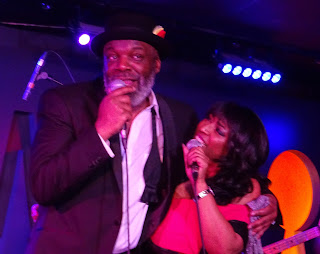 Here are a couple of tunes from Mr Brown that he didn't get round to last night (the collaboration with Tippa Irie seems appropriate in the circumstances). As part of his set he did the cover version of a country hit that appears to be mandatory for all reggae artists, so as a bonus here is the original by Randy Travis. I do like a little Randy every now and then.

"On The Other Hand" - Randy Travis

Calling this post 'Kids of Today' is a bit misleading. It's true of the Hush Kids - today's track is from their self-titled album released last year - but the Daloms are from the 1980s and the Goldens from the 1960s. Maybe 'Kids Of All Ages' would have been more appropriate.

"Morning Is Made" - Hush Kids

I'm off to Athens tomorrow for a few days' work, but will hopefully have time to visit my favourite second hand record shop in Kolonaki so I can return laden with goodies. Until then, remain united!

I've just booked my tickets to see La Yegros in April. If you're not familiar with her work - and I wasn't until I saw the show advertised and checked her out - she is an Argentinian performer who describes her music as "an explosive combination of the urban and folkloric chamane dubs, mixed with funky coplas and cumbia raps".

I don't know what that means, but I know I like it. I think you might too. Here are a couple of tracks from her 2016 album, "Magnetismo". Her new album "Suelta" is out shortly, and she's touring Europe in April and early May (the London gig is her only UK show unfortunately).

For today's clip, some music inspired by (although not originating from) the great country of Argentina. Especially for several of our regular readers.

Today we feature one of the great New Orleans' blues dudes, Mr Earl King. Apparently his real name was Earl Silas Johnson IV. Personally I think he should have stuck with that, it is much more distinctive that being yet another bluesman called King. But what do I know?

Issue Of The Day

Never mind Brexit or Liam Neeson or any of those other things we are told are the issues of the day. The question dominating discussion in my local last night was this: If Yvonne Elliman married Yellowman, would she be known as Yvonne Elliman-Yellowman?

I'll leave that one with you.

Posted by Ernie Goggins at 09:18 No comments:

Chocolate Through The Ages

The Chocolate Watchband were one of the leading lights of the original American garage band scene back in the mid-60s. You could be forgiven for thinking that they left the stage stomping and snarling as soon as the 1970s rolled around never to be heard of again.

But you would be wrong. The band did indeed break up in the late 1960s, but the old gang got back together in the late 1990s and are still going strong. The current line-up includes three members from the old days, including the lead singer David Aguilar. They've just released their first album in nearly 20 years. It's called "This Is My Voice" and its pretty good.

I had planned to feature their classic "Are You Gonna Be There At The Love-In?", but that is one of the many victims of the Great Music Library Transfer Disaster of 2019 (see previous posts). Instead you are getting their moody take on a Bob Dylan tune from 1966, followed by one of the many fine tracks on the new album. You wouldn't think there were 53 years between them.

"Take A Ride" - The Chocolate Watchband

If you're a fan of innuendo, then the calypsonians are the men for you.

A few years back I was privileged to see the great Mighty Sparrow in a rare London appearance. At one point in the show he asked members of the audience to shout out a topic on which he would them extemporise a calypso. Shamefully, one member of my party yelled out "SEX!!!" at the top of the voice.

This led to much disapproving tutting from the rest of the audience, not at her vulgarity but at the lack of ambition. Where is the sport in single entendre? Fortunately Sparrow ignored her and picked some other more innocuous subject. I can't now remember what it was, but needless to say it was all "sex, sex, sex" from the second verse onwards.

Which brings us on to Lord Invader and his explanation of why he wishes to be reborn as a bed bug. Once he's finished, Lord Kitchener describes the unfortunate set of circumstances that led to him being struck off by the General Medical Council. We round things off with Sparrow himself and a stinging critique of the then Trinidadian government's decision to restrict food imports from Guyana.

If these don't get you in the mood for the weekend I don't know what will. Have a groovey one (and, indeed, a Poovey one).