Review Of The Year

This will be my final post of 2013 as I am heading off to Marrakech for a week tomorrow. So it seems appropriate to leave you with a selection of tunes covering twelve of the main events of the year.

"My Girl The Month Of May" - The Alan Bown

Have a groovy Christmas and a funky New Year. See you on the other side.

I was in Bishops Stortford earlier visiting a branch of the Goggins family, and on my way back to the train station I called in at the eight charity shops in the town centre. If Charity Chic were ever to venture south of the border, he could do a lot worse than Bishops Stortford. Although he might be miffed to find that I had already snapped up the Jimmy Shand compilation in the Sue Ryder shop.

Amongst the other CDs I acquired, the most exotic are an album of Latin American protest songs called "Cantos De La Revolucion", featuring all sorts of bods I have never heard of, and a Sri Lankan compilation called "The Stars Of 70s, Vol:3". On closer inspection the latter turns out not to be the original hits but re-recordings made in 2001 and featuring Sri Lankan stars of the 1970s, including former members of the Moonstones, the Super Golden Chimes and the Winslow Six to name but a few. But neither you nor I would have been any the wiser I suspect.

Here is a track from each of the three albums I have mentioned, picked entirely at random as I have not listened to any of them yet.

According to Wikipedia, the only notable (sic) musicians to originate from Bishops Stortford are Bill Sharp, the keyboard player from Shakatak, and anarcho-punk collective Flux Of Pink Indians, which would make for an interesting (sic) double bill. You may not be surprised to learn that there appear to be no Flux of Pink Indians videos on YouTube, so you are getting this instead. Sorry.

The post is called Dos and Don'ts, but that is not entirely accurate. While there are plenty of don'ts, there is only one Do.

But what a Do it is! This Friday the Wild Hare Club has its annual Christmas bash, and Richard has really pulled out all the stops this year. Topping the bill are The Urban Voodoo Machine, supported by an accordion playing DJ, a burlesque artiste, and a bloke from Flesh For Lulu. Truly, something for everyone! If you are even remotely on the same planet as Hereford, get yourself down there.

I think "something for everyone" also describes our selection of Don'ts. I have been playing and singing along with the first one obsessively this evening. Still, it gets you a seat to yourself on the number 8.

"Don't Believe In Christmas" - The Sonics

Exciting times for London-based Tsonga disco fans. I mentioned recently that my mate Brian* over at Awesome Tapes From Africa had just re-released Penny Penny's classic "Shaka Bundu" album for the world to enjoy. Well, now we learn that Brian will be playing a couple of sets at Cafe Oto, where me and the rest of the hipsters hang out, on 3 and 4 January. He is bound to play some Penny Penny in amongst the general awesomeness, so get yourselves down there.

* When I say "mate", we have never actually met. We have however corresponded on a number of occasions by means other than social media, so by Internet standards we are virtually married.

We can't keep you waiting until then for some Tsonga Disco, so here are a couple of tracks from a man I've rather neglected in the past, Richard Maceke. I love the introduction to "Vasivara William", to such an extent that I keep rewinding it and sometimes forget to play the rest of the track.

Here is another Richard who can belt out a decent tune.

In the unlikely event you are tuning in to marvel at my eclectic yet tasteful list of albums of the year, you are out of luck. Real life is a little busy right now, and I don't have the time to go back through all the goodies I have got this year and refresh my memory.

Gigs of the year, in the other hand, is easier, if only because there are less of them to choose from. It is a strong field but as a rough top five I'll go for: John Murry at the Birkbeck Tavern, Kaleidoscope at the Islington Assembly Hall, Jimmy LaFave at the 100 Club, Jupiter & Okwess International at the Open East Festival in the Olympic Park, and Simone Felice at St. Giles-in-the-Fields.

As it happens, Mr Felice's people have recently been in touch. They have kindly sent me a stream of his new album, "Strangers", which I am not meant to share with you, and his new single "Molly-O!", which I am. So here it is.

Good, eh! As for "Strangers", while it is clearly premature to be talking about my albums of the year for 2014 when I can't even hazard a guess as to what they are in 2013, I would be surprised if it wasn't on the list somewhere. It is out in March and you should nab it when you can.

As a bonus, here are some songs about Simones. The first two are about girls (and the first is a bona fide Afrikaans classic). The last is about a boy, although you possibly know him better as Simon.

Posted by Ernie Goggins at 21:53 No comments:

Here's someone I've been meaning to feature for ages - Orlando Julius Ekemode, best known simply as Orlando Julius. One of the founding fathers of modern Nigerian music, he paved the way for Fela Kuti and many others with his funky mid 1960s recordings, and is not averse to bunging into the mix a bit of soul, calypso, reggae or jazz as the mood takes him. Still going strong at the ripe old age of 69, he played just down the road from me a few months back. Irritatingly, it was when I was out of town. Hopefully he'll be back soon.

On the subject of African founding fathers, this one is for Madiba.

The Bert Jansch tribute concert at the Festival Hall on Tuesday was a great night. It was good to see some old favourites (Donovan, Beverley Martyn) and acquire a new one (Lisa Knapp). But if I could only pick one highlight it would be Bonnie Dobson, Robert Plant and Danny Thompson's version of Bonnie's classic "Morning Dew". 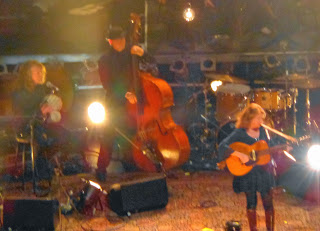 "Morning Dew" is Bonnie's best known song, but she made plenty of other good recordings back in the day, including these two Jackson C. Frank covers. She is alleged to be working on a new album.

"You Never Wanted Me" - Bonnie Dobson

As a bit of bonus, here are some other Bonnies for you.

"Too Long At The Fair" - Bonnie Raitt

"You're Gonna Love Yourself In The Morning" - Bonnie Koloc

And where is the bonniest of all, you ask? Why, here she is with the old Welsh Elvis himself.

A sad day here at Leggies Central. I received an email from Roberto at Neoworx, who provided the visitor counter that used to appear down in the bottom right corner of the blog.

Neoworx are getting out of the old counting business because, to quote Roberto, "the shift from blogs to social networks and the overwhelming competition of free services has dramatically decreased my customer base to the point where I can no longer pay for the hosting of my servers".

Shakespeare once said, "nothing in his life became him like the leaving it". And so it is with Roberto for, despite his personal difficulties, he has found time to send his remaining customers one final count, showing the number of different unique visitors they have had, by country in descending order.

I have managed to rack up visitors from 184 countries. The top of the table is pretty predictable - US, UK, Germany, South Africa for the Tsonga Disco. More intriguing are the 21 countries from which I have only had one visitor. I would like to bring you a song about each of them but - in the absence of any tunes praising the Faroe Islands, Surinam and the Cook Islands - you will have to make do with these six.