From The House Of Klaus

It isn't always easy being an international taste-maker, living in the constant knowledge that one false move will leave you drowning in a sea of scorn rather than surfing the zeitgeist. But it can't be denied that there is a big upside as well.

That has rarely been more true than over the last couple of days. Last night I wangled myself onto the guest list for Erin Rae's show at the Slaughtered Lamb in London's trendy Clerkenwell. It was highly enjoyable and I would heartily recommend going to see her if you get the chance. I would equally heartily recommend her current album, "Putting On Airs", which I plugged here a couple of weeks back. 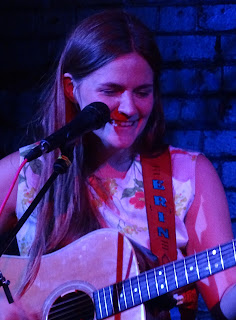 Then at lunchtime today I found myself sitting round a table in London's trendy Brick Lane listening to the legendary Klaus Voormann sharing a few anecdotes. The occasion was a combined promotion for his new book collecting some of his graphic art from the last 60 years called "It Started In Hamburg", and for the Reeperbahn Festival being held in Hamburg next month. I can't get over for it, unfortunately, but it sounds like it would be worth doing so if you can.

Klaus is a fascinating fellow and it was a real privilege to have the chance to listen to him. My favourite story was about being asked by John Lennon to design the cover of "Revolver". At that point he had hardly picked up a pencil for the previous two years, and he described his reaction as "Oh shit, now I have to start drawing again". 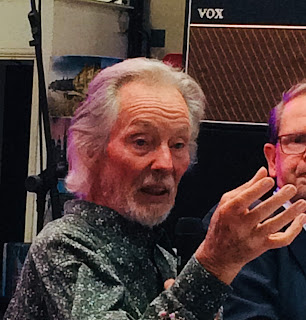 Like many of you I was familiar with some parts of his career - the friendship with the Beatles, his stints as bass player with Manfred Mann and the Plastic Ono Band and the graphic design etc. But what I had not previously appreciated was quite how successful he was as a session musician in the 1970s.

He played on any number of major hits, and not just Beatles related ones like "Imagine" and "My Sweet Lord". That's him on "Perfect Day", "You're So Vain" and "Without You", for example. And on these less heralded gems from his back catalogue.

"Each And Every Day" - Manfred Mann

"Back Home In England" - Bobby Whitlock

And, perhaps most unexpectedly of all, Klaus also produced this:

Posted by Ernie Goggins at 22:12 No comments:

Yes, yes, I know the name of this series is "Apocalypse Thursday" not "Apocalypse Tuesday", but I'm going out on Thursday and won't have the time to do a post then. If we really are approaching the time of the Great Tribulation then waiting for the Thursday after may prove to be pointless. So with apologies to the orderly among you, here goes.

"Fire And Brimstone A Go Burn The Wicked" - Johnny Clarke

Some stomping Syrian sounds to get you in the mood for Saturday night, courtesy of the rightly acclaimed Omar Souleyman. Both are from an album called "To Syria, With Love" which came out last year.

Today's video clip has absolutely nothing to do with Omar, but its magnificent.

Listening to the news most mornings, you could be forgiven for thinking we are rapidly approaching the End of Days. If that turns out to be the case, there won't be an opportunity to commemorate it after the event, so I thought I should get in early. Welcome to Apocalypse Thursday, the first of what may turn out to be a very short-running series.

"In A Armagideon" - Winston Flames

"The End Of The World" - Skeeter Davis

An Outbreak Of Newness

Regular readers will know that I am dreadful old fart who shies away from modern music on the grounds that - as Granny Goggins wisely put it many years ago - you can't make out the words and its all just "bang, bang, bang".

Every now and then, though, something new comes along that doesn't fit that description and I find myself liking it despite my best efforts not to. We have two such examples today.

First up is Erin Rae, whose debut album "Putting On Airs" came out in June. Some of you may have heard "Love Like Before" already as it featured on an Uncut freebie earlier in the year. I can confirm that the rest of the album is just as good, and if you haven't already bought it you should put that right a.s.a.p. As if an album wasn't enough, Erin starts a tour of the UK next weekend. Details are on her website. I'm going to do my best to get along to one of the London shows.

Second, and last, up is Ric Robertson. His debut album also came out in June, and it is also splendid. It is called "The Fool, The Friend". There are hints of Ron Sexsmith about some of the tunes and Thad Cockrell in his voice, both of which are definitely good things. No word of any gigs, but it seems he is a pal of Dori Freeman and a member of Rhiannon Giddens' tour band, so I wouldn't rule it out.

Posted by Ernie Goggins at 17:20 No comments:

There's nothing I can write that could do Aretha justice, so I'll settle for just saying thanks for a lot of wonderful music and safe travels.

You may think the third selection seems an unlikely choice, and perhaps it is, but it brings back many happy memories for me of the summer of 1985 when I was young, free and courting a Norwegian nurse.

"Since You Been Gone" - Aretha Franklin

"Who's Zoomin' Who" - Aretha Franklin

A Man Of Mud

Some jolly pop country from 1962 for you, courtesy of one James O'Gwynn. "My Name Is Mud" was the biggest and last of his six hits on the US country charts. Produced by Pappy Daily, who produced and guided George Jones in the early stages of his career. You can imagine the young vigorous George doing great things with "You're Getting All Over Me".

"You're Getting All Over Me" - James O'Gwynn

"My Name Is Mud"- James O'Gwynn

We open today with a photograph of Carla Bruni and Patrick Dunham-Roper at some sort of event for Bulgari. It is a long story, and not one I intend to subject you to, suffice to say hopefully the pair of them will stop pestering me about it now. 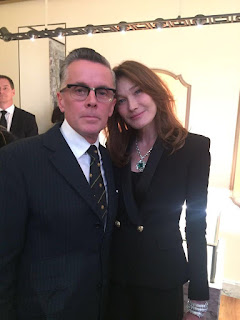 Carla's presence does at least give me an excuse to feature another French singer and style icon, one who I have been infatuated with ever since I first found this record in a junk shop back when I was an impressionable teenager. I suspect I may not be the only man of a certain age or above (or, indeed, below) who has a bit of a thing for Françoise Hardy. 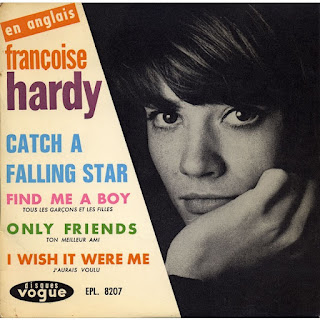 Apologies for the sound quality, particularly on "Only Friends", but they are taken from the actual vinyl EP itself. I don't think it detracts too much.

"Find Me A Boy" - Françoise Hardy

Word reaches us from Portugal than George has been in a continual state of overheated excitement ever since I revealed I have a copy of "Biografia do Pop/Rock", a compilation of the hits that had them bopping in Braga and swinging in Setabul in the 60s and 70s. It is time to put him out of his misery (or possibly increase it).

The album is a bit of an ovo de um clerigo, as they say in Portugal. I know that George had high hopes of Os Chincilas version of "I'm A Believer", but sadly it's a dull and direct copy of the original. Never mind! There are plenty of goodies to be found. Here are a few of them, in chronological order.

If you are wondering where you have heard "Chevrolet" before, it's Donovan's "Hey Gyp (Dig The Slowness)" by another name. Mind you "Hey Gyp" was Memphis Minnie's "Can I Do It For You" by another name, so Donovan can't complain.

What else did the Portuguese music scene have to offer during that period, I hear you ask. Well, some magnificent hair for a start.

A bit of reggae for you tonight. The main act is the late Freddie McKay. Both of his tracks can be found on an album called "Magic", which seems to be a sort of reissue of his 1979 album "Creation" with a few tracks removed and a few others added.

As a bonus we have the very much alive Freddie McGregor - "Go Freddie Go" was released as a single earlier this year - and we round things off with a famous piece of reggae Fredness.

Posted by Ernie Goggins at 19:14 No comments:

I'm off to Southport in the morning by way of Wigan, both places famed for their piers. I thought about doing a themed post featuring only songs about piers, but abandoned the idea when I discovered I don't appear to have any. So instead you're getting a couple of tracks from my current favourite album.

The album in question is "Mudei De Idéia" by Antonio Carlos & Jocafi. Originally released in 1971, it is a mighty slab of mildly psychedelic Brazilian pop. I can see this going down a storm in sunny Southport.

The last couple of times I went to Southport in the summer there was a crooner belting out the hits of the 1960s to a crowd of pensioners outside the cafe next to the crazy golf. On both occasions he was doing his best with this old favourite of mine. Let's hope for a hat trick tomorrow.

Three men, one first name. Mr. Lô is from Senegal and Mr. Isaac is from Cote d'Ivoire; as is Mr. Wonder, despite the obvious Geordie influence in the song title.

Here's another Mr. Wonder for you.