Well, Wallonia turned out to be very nice indeed, with unexpectedly good weather to go with the expectedly good food and beer. I would particularly recommend a visit to scenic Dinant if you are in the area. 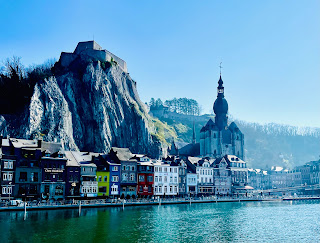 I didn't pick up much Belgian music because CDs are rather pricy there, with most new ones being €18-20 or more. But some scouring of the discount racks and second-hand shops of Namur unearthed a couple of bargains.

One of these was a best of TC Matic, one of Belgium's leading post-punk-funk ensembles. They were active between 1980 and 1986 and had very limited commercial success at the time, with only their debut single "Oh La La La" bothering the Belgian charts at all. The band developed a bit of a reputation in other parts of Europe though, and hung out with the likes of PiL and Simple Minds, and I think their better stuff has stood the test of time pretty well.

Apart from the scenery, the other thing that the town of Dinant is best know for is being the birthplace of one Adolphe Sax. You can visit his childhood home and admire the many giant saxophone sculptures that adorn the town. In tribute to Mr Sax, here is the thing that on its own justified his life's work.

Posted by Ernie Goggins at 07:52 No comments:

Just a quick one today as I'm getting myself ready for my first overseas work trip in two years starting early tomorrow. Back in the time of The Great Before I would have considered three days work in Brussels to be fairly routine, but now its a source of great excitement.

I'll leave you with the random combination of some solid slabs of 1970s Ethiopian soul courtesy of the mighty Muluqen Mellesse and some videos from the vibrant 1980s Belgian scene. I'm staying on in Belgium for a few days to do some sightseeing down south in Wallonia, and hopefully will return with some local musical treats for you all. See you in a week or so.

It is a bit of a scaled down Single Song Sunday today. Please don't think that shows lack of enthusiasm or dedication on my part. It is just that, compared to the sort of song we normally feature in this slot, there are not that many versions of this one knocking about.

"My Rainbow Valley" was first released by Robert Knight in 1967, but the most successful version is the one by Love Affair that went to No. 5 in the UK the following year. Maybe it was dropping the "My" that did the trick. Having previously taken their cover version of Robert's "Everlasting Love" to the top of the UK charts, they obviously decided to stick with a winning formula.

What else is there? Why, a jangly 1980s version, a 1969 Icelandic cover which is a pretty straight copy of the Love Affair arrangement, and of course the Mandatory Reggae Version. There is also a less than brilliant 1980s version from Finland in the videos.

A track from "II" by Espers came up on the old random shuffle the other day and it prompted me to listen to the whole album for the first time in years. I had forgotten how good it is. Don't make the same mistake, folks.

Some old timey R 'n B for you today from Jimmy Tig & The Rounders.

Jimmy Tig (James Tigner Jr as his dear old Mum knew him) was a singer, drummer and bandleader who was born in Atlanta in 1938 and sadly died there just under 70 years later. Keeping it in the family, after his own recording career ended in 1970 he started producing and writing for his son Eric, who apparently had a single out on Hi Records when he was a mere seven years old.

Although they never had much commercial success, The Rounders were obviously a good training ground for up and coming performers as the members included Bobby Purify and Mighty Sam McClain at one point or another.

I could not find any video clips of either Tig Senior or Junior, so here's the Mighty Sam McClain instead.

Posted by Ernie Goggins at 05:38 No comments:

Another Monday, another reggae compilation. I might have to make this the last one otherwise it might turn into a "feature" and I don't need the stress that goes with that.

Anyway this time out it is "X-Ray Music", a dub compilation released on the Blood and Fire label in 1999. I found the CD in a 50p box with no sleeve and no track listing on the CD itself, but when I saw the Blood and Fire logo I knew it would be a good buy. And so it proved.

Many of the big names are there - Tubby, Jammy, Scientist and Scratch - but I have chosen a couple of lesser lights for your enlightenment and entertainment today.

Back when the tracks on "X-Ray Music" were recorded Jammy was a mere Prince. He has long since been crowned a king, rightly so, and he has a new album out this Friday. It is called "King Jammy Destroys The Virus With Dub" and it comprises new takes on old tracks. I was sent a couple of them in my capacity as international tastemaker and I'm very pleased to report he is sounding as good as ever.

You can order a copy of the album here and elsewhere, and the video for lead track "Closed Border Dub" premieres on YouTube on Friday to coincide with the album release. And here is an hour-long documentary about the great man from 2006 to help keep you occupied while you are waiting:

I was rooting around in the "10 CDs for £5" box in my local second-hand record shop the other week when I came across "Tenderheart" by Sam Outlaw. Subsequent research revealed it made No. 3 in the UK country charts when it came out in 2017, but it had passed me by at the time (as had the fact there is a UK country chart to be honest). Be that as it may, I gave it a go.

Mr Outlaw - not his birth name, you will be surprised to learn - hails from Southern California and describes his style as "SoCal country". It's not traditional country by any means and there is a definite California soft rock vibe in places - one track even uses the phrase "peaceful easy feeling" - but its a lot closer to the real thing than the vast majority of the drivel they try to pass off as country these days.

Here's a couple of my favourite tracks on "Tenderheart". You can find it and all of Sam's other releases on Bandcamp should you be so inclined.

"Look At You Now" - Sam Outlaw

Now here's a proper outlaw for you.

Posted by Ernie Goggins at 06:45 No comments:

I had been really looking forward to the weekend just past. Me and my friend Mr F had tickets to see Wyndow (the duo featuring ex-Trembling Bells singer Lavinia Blackwall) on Saturday and the launch for the new Bas Jan album, with support from Yama Warashi,on Monday.

I have plugged Wyndow and Bas Jan's current albums here previously - click on their names to find them on Bandcamp. Yama Warsahi also has a new album coming out at the end of May. It is called "Crispy Moon" - the moon is a recurring theme in her album titles - and you can pre-order it from Bandcamp (and pick up her back catalogue while you're there). She was a new name to me but I like what I've heard so far.

In an attempt to entice you shell out your hard-earned cash on one or more albums, here is a track from each of their previous albums. These are Bas Jan's "Yes I Jan" and Yama's "Boiled Moon", both from 2018 and, as Wyndow have no earlier album's, Lavinia Blackwall's  2020 solo album "Muggington Lane End".

Here's some more Yama for you. I disagree strongly will the ill-founded assertions of that Carl Carlton. She is no way a bad mama, Yama, quite the opposite in fact.

Extended Sounds To Start The Week

I am hoping the title of this post will be enough to put Swiss Adam and The Swede off the scent so they don't realise this is a blatant rip-off of their "Monday's Long Song" features.

I have raved here before about the Sahel Sounds label and its fantastic catalogue of recordings from the Sahel region. One of the label's many highlights is the self-titled album by Super Onze. Recorded in Northern Mali in the early 1990s, it contains 47 minutes of "improvised praise for Yehia the Holy Man" (according to the description on Bandcamp).

There are no song titles, it is just divided into Side A and Side B as on the original cassette release. I have picked Side B for no other reason than it is marginally the longer of the two, but really you should listen to the whole thing all the way through.

"Onze", as you polyglots know, is French for "eleven". Here's another Super XI.

Some vintage Texan soul for you to round out the week, courtesy of the late Clay Hammond. Here we have both sides of a single he released in 1969.

You find them both on a Kent compilation originally called "Taking His Time" which was later combined with some Z.Z. Hill tracks and renamed "Southern Soul Brothers". I think the later version of the compilation is still generally available.

"The Good Side Of My Girl" - Clay Hammond

And here's a little something from the other Southern Soul Brother

Some Yoko Ono for you today. Don't panic, its from the commercial end of her repertoire (or what passes for commercial for Yoko). Both tracks are from 1973's "Approximately Infinite Universe" album.

I wonder if Yoko smashing windows was one of the sounds of breaking glass that Nick Lowe liked? If they had met, fallen in love and married in some alternative infinite universe she might have been called Yoko Ono-Lowe or even just Yoko Lowe. It feels like a missed opportunity.

Just be grateful I dropped the bit about them going on honeymoon in the Caribbean so Nick could sing "Yoko Lowe" to the tune of "Kokomo".