I got my first gig of the year under my belt last night. I enjoyed it greatly, but I think it is safe to say that I'm unlikely to see anything quite like it again this year.

The venue was St. Pancras Old Church, and the headliner was Johnny Dowd. Support came from the Dutch duo of Melle de Boer and Suzanne Ypma (formerly of Smutfish and Woof Woof Ridicule respectively - no, that's really true).

They were promoting Melle's new album "Temporary Bandage", from which the first track below comes. They reminded me quite a bit of our old pal from over the German border, Dad Horse Experience. Like Dad, there were a couple of songs about matricide, alongside more surreal ones about - for example - an abandoned smile that wrote a letter to its mother who drove over in a Lincoln Continental to rescue it.

Then we had Johnny himself, ably accompanied by Mike Edmondson on guitar. The first half of the set was what we had come for - mostly discordant blues riffs with Johnny hollering things like "Hotpants! I wanna get spanked!" over the top. 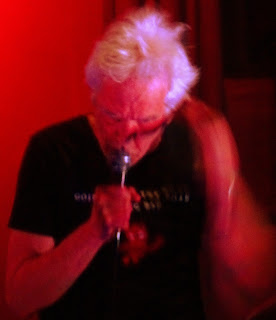 That part of the evening came to a close with an Oi! version of Judy Garland's "Smile", which one might charitably call a brave experiment that doesn't merit repeating. Johnny then brought Melle and Suzanne back on stage to join him and, for the rest of the evening, we were treated to a set of American folk and country standards. Think Bruce Springsteen's "Seeger Sessions" but with Bruce replaced by the crazy old man who stands at bus stops shouting at cars. "Tom Dooley" will never quite be the same again.

You had to be there really. And I'm very glad I was.

"A World Without Me" - Johnny Dowd

Ann Cole was a raucous soul singer from Newark, New Jersey who had a few medium-sized hits in the R&B charts in the late 1950s and early 1960s. Her career was sadly cut short in 1962 when she was badly injured in a car accident and confined to a wheelchair for the rest of her life.

She is best known, if known at all, for doing the original version of "Got My Mojo Working". Apparently she toured with Muddy Waters in the mid 1950s and he learnt it from her.

Quite a few major mojos have sadly stopped working in the last week or so. Our bonus song is a brief and inadequate tribute to the most recent one. Frank Sidebottom and David Soul do it so much better.

"Plain As The Nose On Your Face" - Ann Cole

Posted by Ernie Goggins at 18:27 No comments:

Very saddened to hear today of the death of one of my personal heroes, the mighty Hugh Masekela. I can't do him justice so we'll let him speak for himself. Rest In Peace, Mr Hugh.

Posted by Ernie Goggins at 19:47 No comments:

I was poking away in the dustier corners of the eMusic website the other day when I came across a couple of albums on the Crazy Cajun label by one Oscar Perry. I had never heard of him, but stuff on that label is often worth checking out, so I did. And you might want to as well.

Oscar hails from Houston and got his first break in the music business as a writer and arranger on the Duke label, helping to create hits for the likes of Bobby 'Blue' Bland. When Duke folded in 1974 he moved over to a similar role at Crazy Cajun, where he added the extra duties of playing bass for Freddy Fender as well as performing in his own right. Both of today's selections come from that period.

"Playboy Side Of Town" - Oscar Perry

"Once In A While" - Oscar Perry

Speaking of Freddy Fender, here he is with his big hit. His enormous hair completely obscures our view of the band behind him, so I can't tell whether Oscar is there.

Posted by Ernie Goggins at 22:08 No comments:

Come To The Kaveret, Old Chum

Today's post is a special treat for our loyal Israeli audience (i.e. the two people who have visited since I treated myself to a flag counter for Xmas). We have a couple of tracks from one of the early Israeli rock legends.

You know them as Kaveret, but the rest of us know them as Poogy as that - for reasons that appear frankly incomprehensible - was what they called themselves when releasing records or performing outside Israel. It was under that name I personally first discovered them, when I came across a copy of their second album in a junk shop. Who could resist a record called "Poogy In A Pita" with a front cover consisting of a photo of the band superimposed on an outsized pita bread and salad?

I wouldn't call myself a huge fan, and some parts of their act are a bit inaccessible if you don't speak Hebrew - most notably the humorous skits and parodies that pop up at various points on their albums. But they had their moments, of which these are two. "Yo Ya" is a bit of a favourite of mine.

Internationally, the highlight of Kaveret's (and also Poogy's) career was representing Israel in the 1974 Eurovision Song Contest, where they finished in a creditable seventh place. The winners were some band from Sweden with two girl singers that promptly sunk back into obscurity. This, however, is the song that will always be most closely associated with the 1974 contest.

Some Saturday Night Soul for you, courtesy of Eric Mercury. Eric hailed from Toronto but started drifting slowly southwards in the late 1960s, finally fetching up in Memphis where he released a few records on Stax in the early 1970s. He gave up recording in the mid-1970s and moved into writing and producing, working with Roberta Flack among others. Whether he is still with us, I couldn't tell you.

Both of today's tracks are from his 1969 album, the magnificently titled "Electric Black Man".

Posted by Ernie Goggins at 18:53 No comments:

In this week's second Tsonga Disco installment, we are delighted to welcome back our old friend General Muzka. Along with his former sparring partner, Penny Penny, we have probably featured him more than anyone else on here.

But while Papa Penny appears to have pretty much hung up his mike, the General is still going strong. In fact, his 2016 album "Dr Thomas Chauke (Nyoresh)" is one of his best. Today's first track comes from that, the second from "Off Duty" which I think was released in 2015 (the sleeve notes are not exactly copious).

Dropping down the ranks a bit, here's Lt. Stitchie with some sensible advice for women who pretend their feet are smaller than they really are.

Bad Boy Benny Is Back

We are going back to our roots this week and bringing some Tsonga Disco to the masses.

Today's tracks are both from Benny 'The President' Mayengani's 2016 album "Vitanani Fire Brigade". Benny is a bit of a divisive figure on the Tsonga scene, but it can't be denied that he knows how to bash out a beat.

For the avoidance of doubt, the "Stew" in the title refers to the food made by mixing different ingredients together to make something tasty, not Somali Stew the self-styled ladies' man and menace of the Mogadishu disco scene.

However, that Stew would undoubtedly have been familiar with today's tracks. Mogadishu in the 1980s was awash with bands mixing traditional Somali sounds with funk and jazz and coming up with something new - in the same way as had happened in neighbouring Ethiopia in the 1970s before the Derg put a stop to that sort of thing.

However, whereas the Ethiopian music of that era was rediscovered and reintroduced to the waiting world a while back, the same doesn't seem to have happened with the Somali sounds. But that may begin to change thanks to the good people at Ostinato Records, who last year released a compilation called "Sweet As Broken Dates". It is well worth a listen.

That album features a couple of tracks by Dur-Dur Band, who were the big cheeses of the Somali scene. Here are a couple more, taken from their 1986 album "Rafaad iyo Raaxo". The sound quality is a bit ropey, but I don't mind if you don't.

From Dur-Dur, we move seamlessly to this...

A belated welcome to 2018. I hope you all saw in the new year in style. I was down our local pub, where there was some controversy about the winner of the fancy dress competition. He claimed to be Kurt Cobain, but most of us thought he was Noel Edmunds.

Let's kick the year off in style with some souped up Thai traditional music, courtesy of the magnificently named Paradise Bangkok Molam International Band. Crazy name and, presumably, crazy guys.

Both tracks come from their 2014 album "21st Century Molam" which is worth checking out. Some tracks on the album have bizarre echoes of this old favourite. Whether Pan's People are performing a traditional Thai dance routine in the clip I couldn't tell you (although I suspect not).