Today we have three tracks from a fine 2-CD compilation called "Brumbeat" - like Merseybeat if it headed west on the M62 and then south on the M6.

All the major West Midlands beat groups of the 1960s are featured, as you would expect - The Spencer Davis Group, The Moody Blues, The Move and so on. Two of today's three selections have a connection to The Move. Carl Wayne, of course, went on to be their lead singer, while "William Chalker's Time Machine" was written by bassist Ace Kefford.

"That's When Happiness Began" - The Montanas

The Montanas weren't from Birmingham at all but from Wolverhampton. Like this lot.

Posted by Ernie Goggins at 14:38 No comments:

Last time out in Tsonga Disco World, I mentioned George Maluleke, the leading light of one of the two great Tsonga musical dynasties. On that occasion he was involved as producer, this time he is performing in his own right. Backed up as always by the redoubtable Van'wanati Sisters, here are a couple of tracks from his 26th album, "Byelo Khokholo". That's right, 26th. And this came out in 2010. He must be up to 30 by now.

Normally I spend hours agonising over the right choice of video to go with the songs. No need for that today, not when this bloke comes right after Mr Maluleke and the girls on my iPod playlist.

You can blame Charity Chic for this one. He recently posted several versions of "Wanted Man", one of those songs that is essentially just a long list of place names. I mentioned in passing that I had a number of dodgy renditions of the similarly themed "I've Been Everywhere", and he dared me to prove it. I am sorry that the rest of you have to suffer the consequences.

Until I started preparing this post I had assumed that the American version of the song, which was first a hit for Hank Snow in 1962, was the original. But that is not the case. The first version was actually Australian, written by Geoff Mack in 1959 and popularised by Lucky Starr three years later. Hank heard Lucky's version  and asked Geoff to rewrite it for the American market.

Since then, people all over the place have had a go at adapting it. We start with the Australian and American versions and then tote our packs around the roads of the UK, Ireland, Czechoslovakia, Catalonia and Cajun country before concluding our trip in the Netherlands.

"I've Been Everywhere" - The Raybone Experience

Let's leave the last word to the Wanted Man himself. 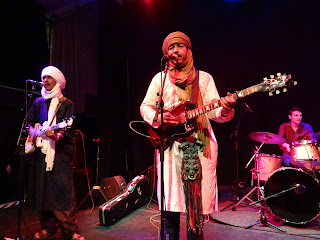 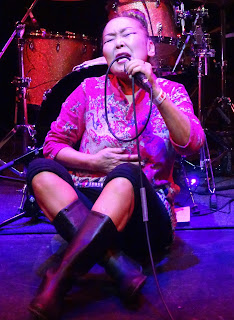 I am finally getting round to working my way through the stash of Tsonga CDs I bought in Johannesburg last year. I will aim to have one Tsonga themed post a week until I get to the bottom of the pile.

We start off with an artist I had not heard of before, but who has some heavyweight friends. Regulars will recall that there are two clans that dominate the traditional Tsonga music scene, the Chaukes and the Malulekes. The patriarch of the Maluleke clan is George, and he pops up as joint producer of "Hananai No. 1", the 2007 debut album by Lizah N'wa Nkwinika. The production is considerably more funky that you would normally associate with George, but none the worse for that. Here's Lizah.

As far as I know the rivalry between the Chaukes and Malulekes is purely a musical one. They are not the Tsonga equivalent of the Hatfields and McCoys. Speaking of whom, Waylon Jennings gives the two tribes a name check when singing about the need to get back to the basics of love, which seems fairly appropriate on Valentine's Day.

What better way to get in the mood for the weekend than with some Portuguese new wave from the early 1980s? Actually, maybe don't answer that one...

When I was in Lisbon last month I picked up a compilation album called "O Melhor Do Rock Português 1980-1984". Here are a couple of selections for you. The first one in particular could not possibly come from any other decade.

If Portuguese Wikipedia is to be believed, the success of "Amor (Parte 1)" led directly to Heróis Do Mar getting a prestigious support slot on a Roxy Music tour. It being 1982, Bryan and the boys were presumably promoting this:

Yesterday we played you a clip by the late zydeco giant and former resident of Kinder, LA, Beau Jonque. I enjoyed it so much it set me off on a bit of a Beau binge. Here are a couple of corkers from the collection.

Northern Soul fans will instantly recognise the second track as a zydeco version of the old Cliff Nobles standard. We have added the original for those of you who have not had the pleasure of hearing it before.

From the Horse to the Pony.

Posted by Ernie Goggins at 19:22 No comments:

According to Dan Willging, who wrote the sleeve notes on Bernie Alan's "Blue Eyed Zydeco" EP, Bernie and his band Knight Train play an "exciting synthesis of zydeco and zydecajun". If anyone can explain the difference between the two I would be very grateful.

Bernie and the boys recorded the EP in Kinder, Louisiana in 2001. I purchased it in a flea market in Eccleston, Lancashire yesterday. The first isn't the home of the eggs, the second isn't the home of the cakes. And that's all I can tell you about either of them without recourse to Wikipedia.

Anyway, here are the lads.

While you've been listening to that I've been busy on Wikipedia compiling a sort of "village top trumps". Eccleston wins on size (4,500 residents to Kinder's 2,500). Kinder wins on entertainment options (a casino resort with championship level golf course versus two pubs, one of which was in the process of being demolished yesterday). Kinder makes a decent stab at the "famous residents" category thanks to the late zydeco star Beau Jocque, but I am afraid Eccleston wins hands down thanks to current resident, cyclist and mod Sir Bradley Wiggins.

Sir Brad wins on the fame count, but if it is a rollicking good tune you want you really have to go with Beau Jocque.

A bit of early 1970s "conscious" soul for you today courtesy of Mike James Kirkland. He released two albums - "Hang On In There" (1972) and "Doin' It Right" (1973) - and we have one track from each in chronological order. Fans of Marvin Gaye and Donny Hathaway might like this.

"Where Is The Soul Of Man?" - Mike James Kirkland

"Love Is All We Need" - Mike James Kirkland

Mr Kirkland hails from the magnificently named Yazoo City in the state of Mississippi. Hence the choice for today's clip.