A Right Bunch Of Charlies

I promised in yesterday's Bobby Bland tribute he would be back again today. I had intended to post his great version of Charlie Rich's "I Take It On Home", but then I started thinking how many other soul and blues singers had successfully covered Charlie. So I thought I would make into a post of its own.

It's no surprise that Charlie's tunes are such a good fit, because at his best they are as much soul and blues as country. In the 1960s Willie Mitchell signed him to Hi Records, and he knew a thing or two about soul music. In fact, while there, Charlie released the first ever version of the soul standard "When Something Is Wrong With My Baby".

Enough rambling. On with the show.

I heard the news earlier today that the great Bobby "Blue" Bland died on Sunday. He had one of the great soul voices and was a great influence on our old friend Mpharanyana and many, many others. Here is a small selection as an inadequate tribute. And we know where he's gone, ready to hold true to the promise he made in this first song.

"I Can Take You To Heaven Tonight" - Bobby "Blue" Bland

"You're Gonna Love Yourself In The Morning" - Bobby "Blue" Bland

If I can get round to it, there may be a little bit more from Bobby tomorrow.

For no good reason, here are three songs called "Buttercup".

I have had a request to pay tribute to the mighty Slim Whitman, who sadly passed away earlier in the week. It is quite right that we should, so here he is. We've rounded up a few more slim gentlemen to keep him company, some from as far afield as Australia, Jamaica and Kenya.

"Don't Let The Stars Get In Your Eyes" - Slim Willet

"Lights On The Hill" - Slim Dusty

"My Conversation" - Slim Smith & The Uniques

I had always assumed "I'll take you home again, Kathleen" was an old Irish song. It turns out it was written by one Thomas P. Westendorf of Indiana in 1875. Here is another, more recent, song written by an American that the Irish have adopted as their one. They love it in Letterkenny.

Today we are bringing a bit of culture to you philistines (apologies to any non-philistines reading this): a couple of satirical songs from Gilbert & Sullivan's immortal "HMS Pinafore". These are from a 1949 recording by the D'Oyly Carte Company.

26 or 27 years later I appeared in a production at the Christian Brothers College Boksburg. It being an all boys' school and my voice having not broken by that point, I played a sister or a cousin or an aunt. Looking back, and knowing what we now know about some of the Christian Brothers, I could consider that by being made to dress up as a woman and sing I was getting off lightly.

The two songs are those with which Sir Joseph Porter (First Lord of the Admiralty) and Captain Corcoran (position self-explanatory) introduce themselves.

"When I Was A Lad" - D'Oyly Carte Opera Company

"I Am The Captain Of The Pinafore" - D'Oyly Carte Opera Company

Those of you who know me will now be expecting some Gilbert O'Sullivan, but you would be wrong. You are getting more Joseph Porter. Not the fictitious First Lord of the Admiralty, the leader of Blyth Power. Like W S Gilbert, he also regularly undermines figures of authority in his songs.

Ah, who am I kidding. Of course we have some Gilbert. I love Gilbert!

Posted by Ernie Goggins at 21:30 No comments:

I'm off to see Lucinda Williams on Monday, which I'm looking forward to immensely. Big Lucy, as she is affectionately known round here, is a regular contributor to those single artist tribute albums you seem to see more and more of. This year alone she has done the honours for John Denver and Guy Clark (at least). So I had planned a "Big Lucy's Covers" post, until late in the day when I remembered I have done that before.

Instead you are getting Ron Sexsmith. Ron is another favourite of ours, and he pops up on these albums almost as often as Big Lucy (both are on "This One's For Him", the Guy Clark tribute, for example). Here is he playing tribute to - in alphabetical order - Guy Clark, George Harrison, Gordon Lightfoot, Nick Lowe and Judee Sill.

"Give Me Love" - Ron Sexsmith

"Where Is My Everything" - Ron Sexsmith

And here he is with one of my (many) favourite tracks of his own.

A very entertaining gig in our local on Saturday. Germany's own Dad Horse Experience brought his unique brand of mutant blues and gospel to the people of "The Bow", and we all got on like a house on fire. Although I fear the mass purchase of patent Dad Horse Experience kazoos by many of the regulars is something we will all come to regret in the next few weeks. 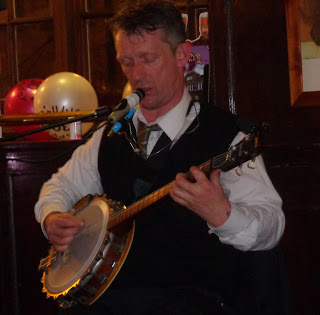 ﻿
On the subject of central Europeans who take classic American music forms and mangle them into something entirely new, I picked up a Gil Dobrica compilation while in Bucharest last week. Gil was a big star in Romania in the 1970s with his covers of rock, blues, soul, and country songs, his biggest hit being "Hai Acasa", a Romanian language version of "Take Me Home, Country Roads". That is on the compilation, of course, along with covers of the likes of Ray Charles, Barry White, Jimmy James & The Vagabonds, KC & The Sunshine Band and Sailor.

The only slight disappointment is that at least half the tracks are sung in English not Romanian. But it doesn't detract too much from your enjoyment. He does a pretty good job on most of them and, as the list above shows, his choice of artists to cover is nothing if not eclectic. Take, for example, today's first selection, which is an old Tower of Power album track. The second selection I have not been able to trace at all. The writing credit goes to "Solarion" (which could be a person or a band) and it has the feel of a song that started life somewhere in Europe. Any ideas?

I have an announcement. I have fallen in love (again). This time, with a man.

His name is Matthias. He does promo work for Greensleeves and VP Records and he sends me the most wonderful things. Deep down inside I know he's seeing other bloggers, but as long as he keeps showering me with gifts I'm willing to overlook that.

This month he has excelled himself. Greensleeves have released four 40 track compilations under the "Total Reggae" banner: one each for roots, dancehall, ragga and what they call "Chart Hits" (by which they mean reggae covers of chart hits). As if that wasn't enough, each of them sells for less than £6! You can see the track listing at the Greensleeves blog, but if I were you I would just go and buy them now. When I went on Amazon earlier all of them were showing "nearly out of stock".

Also out via Greensleeves this month, and equally excellent, is "The Ladies at Joe Gibbs" which, as the name implies, features Joe Gibbs produced female singers, all from the 1970s and 1980s I think. From that album, here is Hortense Ellis reworking a soul standard. And from the "Chart Hits" album, you've got Beres Hammond doing the same.

Stevie is still the best though...

Until he gets his mates in. This is pretty awful. Apart from the man himself, Mary J Blige is about the only one who has any idea what she's doing.

From Johnson To Jones

Over the last couple of days we have had some semblance of summer here in London (though it will probably have ended before I finish typing this). Let's celebrate it while we can.

Here's what happens when the King of Carolina beach music teams up with the King of New York:

As well as being a great summer record in it's own right, it is also the best remake of a Ramones song you are ever likely to hear. I stand ready to be corrected but this, by the usually estimable Paul Jones, may well be the worst.

Let's restore our equilibrium with the Ramones, doing a cover version of one of their own favourite summer songs, and some more General Johnson (you can't have too much General Johnson).

As a bonus, because you've been good and because I'm not around for the rest of the week, here is a late addition to the last post on songs about singers.

Romania, since you ask. I'm working in Bucharest for a few days, but I should have time for 24 hours sightseeing at the end of trip. I may pick up some music to delight you with while I'm there although, if this year's Eurovision entry is anything to go by, there is an equally strong chance that I won't.

Like the headline says. Here are some songs about (or addressed to) singers.

Four of those five titles also appear in the "Artists" menu on my iPod. This woman is the odd one out.