The Baobab Boys Are Back!

Had an excellent night out last night, watching the current line-up of Senegal's legendary Orchestra Baobab bopping away in Camden. It was good to see many of the original members still involved, and showing the youngsters a thing or two. Coming after the - possibly even better - Orchestre Poly-Rythmo de Cotonou gig a few months back, this is clearly a vintage year for veteran West African orchestras. 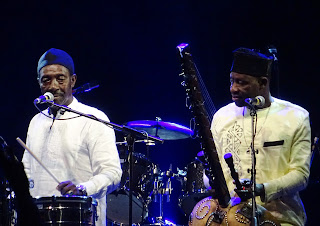 At the other end of the age and experience scale, I also enjoyed seeing Girl Ray while on my travels in Eindhoven last week. Their debut album, "Earl Grey" - see what they did there? - is recently out and well worth a listen. 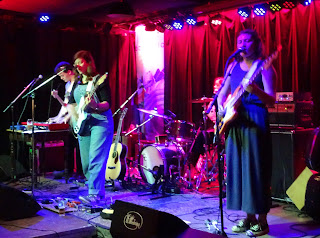 I have returned from the Netherlands with a few choice additions to my CD collection. Most promising of all is "Rare Dutch Folk: 43 Lost Classics from the Golden Age of Nederfolk 1967-1987". Experience suggests that not all will prove to be "classics", and choosing to include 43 tracks rather than the more conventional 40 might seem like an attempt at spurious authenticity. But I am sure overall it will be a delight.

Before we get round to that, though, here is a belated and woefully inadequate tribute to the late, great Fats Domino.

"Along The Navajo Trail" - Fats Domino

Posted by Ernie Goggins at 12:29 No comments:

Nearly in the Natherlands

Tomorrow morning I head off for five days in the Netherlands - mostly work, but I am hoping to catch up with an old pal or two while I'm there. Here are a couple of Dutch crackers to get me - and hopefully you - in the right frame of mind. 'Inkpot' in particular is rather splendid.

Regular readers will already have guessed what is coming next.

Posted by Ernie Goggins at 09:07 No comments:

While browsing in the dustier corners of eMusic the other week I came across a series of compilations of vintage French psychedelia going under the collective name of "Wizzz". To be honest, most of it was utter drivel, but there were a few gems in there as well. Here are two of them.

In other music news, I was down at the Sebright Arms a couple of nights ago enjoying the Nightingales and Ted Chippington who are doing a sort of Vindaloo Records reunion tour. Excellent overall, but there were two minor disappointments - Ted did a proper joke, and they didn't play the hit. I can never undo the memory of the first, but I can put the latter right now.

Posted by Ernie Goggins at 19:10 No comments:

Tonight we're going way, way back to way back when with Mr. Junior Wells.

"Messin' With The Kid" - Junior Wells

"The Things I Do For You" - Junior Wells

Posted by Ernie Goggins at 19:25 No comments:

One of the news stories in the UK that might have attracted more attention if the world was less demented than it is at the moment is the possibility of national strikes in the privatised postal service over jobs, pay and pensions. In a show of solidarity, here is our tribute to the humble but heroic postie; including, in the final selection, to the humble but heroic striking postie.

"Nothing Was Delivered" - The Byrds

Bebey, I Love You

Two classic tracks from the mighty Francis Bebey. Any attempt to describe them would be utterly futile.

I had a most enjoyable evening at the Barbican yesterday courtesy of the Spacebomb Revue - a one-off gig featuring an array of artists who have had their records released on Spacebomb Records and/or recorded in Spacebomb studios and/or produced by Spacebomb head honcho Matthew E. White. 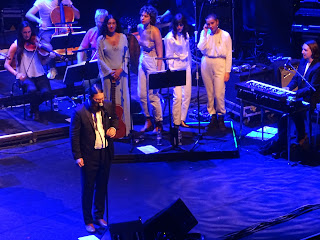 Hosted by Mr. White, as was only right, the singers were rotated rapidly using the "if you don't like this one, there will be another one along in a minute" system. Fortunately I liked most of them, including some I had never heard of before such as Cocoon and Bedouine.

It helped that, musically, for most of the evening you could have been back in the 1970s. There was no shortage of Southern soul, louche funk and Laurel Canyon moments. Foxygen appeared to be going for the Lou Reed meets 'Discovery'-era ELO vibe. And as for Howard Ivans - while I'm not sure the world really needs a new Boz Scaggs, if it does then its him.

"Never Over You" - Natalie Prass

We kick off October with a selection of some of the better freebies that I've received over the last couple of months. They are all from new albums that have either just been released or are just about to be. I've added the album title so you know what to look for when you decide you need to explore further.

Another favourite recent freebie is "War Surplus" by Becky Warren. I was going to include it but then spotted that it first came out last year but is being promoted again. A good job too because I missed it first time round and I suspect many others may have done too. Here's a video clip: