I have been a bit preoccupied with what passes for real life this week, which is why it is only now that I am getting round to paying tribute to Wendell Holmes of the Holmes Brothers, who died last Friday.

With his brother Sherman and the also dear departed Popsy Dixon, Wendell was one-third of the greatest bar band I have ever had the pleasure to see. It is not my intention to damn them with faint praise - if you wanted a band guaranteed to get a groove going in a small venue, they were the people to call. I am not sure they ever quite captured their full magic on record, but they gave it a bloody good go. RIP Mr Holmes.

"You Can't Hold On To Love That's Gone" - The Holmes Brothers

"I Found A Winner" - The Holmes Brothers

Ululate In The Evening

Who could resist a compilation called "Yodellin' Crazy: 25 Original Country Yodellin' Classics". Not me, for sure. Here are three of the self-same classics for you to yodel along with.

You clearly spell "yodelin'" without a "g", but the question of how many times you use "l" is unresolved. The compilers have gone with two, but I reckon a man called Yodeling Slim Clark probably knows what he is doing so will plump for one. Although Slim does bung a "g" on the end of his epithet, so maybe he is wrong on the big issue as well. Views please.

"I'm Casting My Lasso Towards The Sky" - Slim Whitman

"Take Me Back To Old Montana" - Yodeling Slim Clark

The polymaths among you will have spotted that the title of today's post is a poor attempt at a Paul Simon song title based pun. Specifically, this one.

Regular readers will know that we have a standard - some might say tired - format for these posts. We start with a bit of burbling from me, then you get the mp3s, then we finish things off with a video clip that is only ever tangentially linked (if at all) to the music, and more often that not features something naff from the 80s or 90s.

Well hold on to your hats folks, because tonight we are going crazy (or subverting the tropes as they might say on a more intellectually robust blog). We are reversing the order of the mp3s and the video!!! Before you switch off in disgust, let me explain. We have a very good reason to do so.

Some of you may remember that a few posts back I mentioned that the mighty Pierce Turner had agreed to cover the equally mighty Joe Dolan's "The Answer To Everything" if I pledged some money towards the cost of making his next album.

Well, he's a man of his word, and here he is performing it in Wexford earlier this month. For reasons best known to himself Pierce has chosen to change my name to Chris and exaggerate the amount of money that I pledged - but that's performers for you. And if his rendition is not quite as smooth as Joe's original, well what would have been the point of that? It's great fun and worth every penny.

Now to the music. I thought of trying an Irish link and combining "Irish", "80s/90s" and "slightly naff" led me immediately to "C'Est La Vie" by B*Witched. Inexplicably, it appears I don't possess it, so instead you are getting the Robbie Nevil hit of the same name - it is not Irish but it meets the other criteria admirably. And from Robbie Nevil, there is really only one way to go.

If you enjoyed any of that, or even if you didn't, please remember to Pledge for Pierce!

The Magic of Mariem

Last time out we were in Mauritania. Today we hop over the (much disputed) border to Western Sahara to bring you the finest Sahrawi singer in the business, the great Mariem Hassan. Today's selections are from her most recent album, 2012's "El Aaiun Egdat". I know our regular reader and fellow surfer of the zeitgeist George is a fan of this lady, so this is for him.

Posted by Ernie Goggins at 09:41 No comments:

Some Mauritanian magic for you tonight, courtesy of Noura Mint Seymali. These two tracks are the opening salvo on her excellent 2014 album "Tzenni".

It is difficult to make an accurate assessment of Noura's height from the album cover, as the photo of her is taken from above. But in every other respect she is a good match for Mungo Jerry's specification.

Posted by Ernie Goggins at 20:11 No comments:

You can blame Joe Bataan for this. At his London gig last week, Mr Bataan treated us to his version of "Crystal Blue Persuasion", and it reminded me of how many other good versions I know. So here they are.

We start with the Tommy James original, followed by the soul version from the Kelly Brothers, which is possibly my favourite of all. We have a double-headed Latin attack from Joe and Tito Puente, followed by the mandatory reggae version, before we give it the pop orchestral treatment courtesy of our new best friend, Frank Chacksfield.

I haven't been able to find any clips of Tommy James performing the song when it first hit the charts in 1969, so you'll have to make do with this. I don't think you'll be too upset.

Great excitement last night when me and the gang went to see the legendary King of Latin Soul, Joe Bataan, in concert. The fact that the great man was playing in a half-full student union venue rather than a stadium or festival is a travesty of "wrong Smokie singer on 'Stars In Their Eyes'" proportions, but made it all the more special for those of us lucky enough to be there. 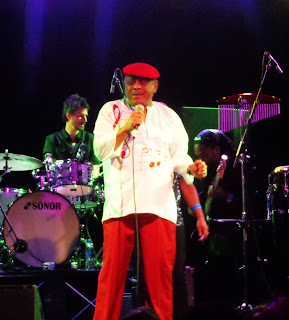 Joe was in good voice and looking very sprightly for a man of 72. Here are a couple of his classics that we were treated to last night.

Joe was backed by London's own Grupo X, who were pretty impressive in their own right. Of course, England has a long and vibrant tradition of Latin music.

Posted by Ernie Goggins at 20:10 No comments: