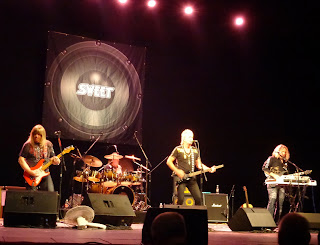 One from the man himself, one from his old sparring partner. They said he could break a mountain in two.

"Half Past France" - John Cale

Straight Off The Urals

Off to Russia tomorrow. First I have a few day's work in Moscow then I'm heading down to Cossack country to have a look around. Here are some songs about Russia and Russians to keep you going in my absence. See you in a week or so.

"Man From Russia" - The Blow Monkeys

The late, great Peta Teanet - the first King of Tsonga Disco - always goes down well with our core constituency. So, pandering to you as shamelessly as a Tory politician inventing immigration scare stories, here are a couple of tracks from his album "Double Pashash".

"Double Pashash" came out in 1995. Back in Blighty this was a big hit that year. I remember dancing to it in the Rio Nightclub in Leamington Spa with a group of drunken civil servants - happy days!

And of course you can't have that without this as a 2-for-1 treat. Mandy Dingle!

Posted by Ernie Goggins at 21:04 No comments:

I had a very pleasant time in Lithuania last week - definitely worth a visit if you have not had the chance to do so before (and, indeed, if you have). 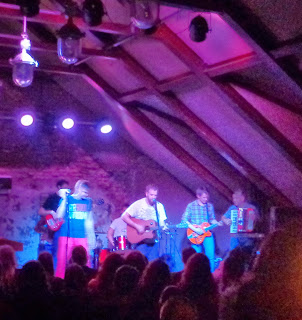 I enjoyed the show a lot. The accordion player gave them a feel of the Waterboys just at the point they started moving from The Big Music to Fisherman's Blues (not that I'm equating the two bands, you understand).

The album I enjoyed slightly less. It is a good listen, but on most tracks they replace the accordion with keyboards which makes their anthemic ambitions a bit more obvious. I've never been a great one for anthems, and it is perhaps no surprise that my favourite track on the album is the one that sounds most like the live version.

I can also announce an exciting discovery for you fashion fans. As you can just about make out in this picture, the suit jacket with sleeves rolled up to the elbow look is still alive and well in Kaunas. It's like the 80s never left us. 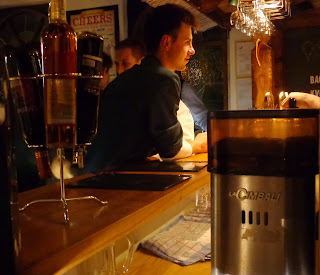 Posted by Ernie Goggins at 22:27 No comments:

You are not going to hear a lot from me this month, folks. In a couple of hours I'm off to Lithuania for a few days' work followed by a few days' holiday, I come back to change my socks, then I'm off to Russia for more of the same. Still, think of all the Lithuanian disco and Russian folk-rock you have to look forward to!

I'll leave you for now with a selection of tracks that we first featured back in our formative days but are well worth playing again. We start with something from an album of Virginian soul and funk that I bought in the State Library in Richmond (now that's a library!). We follow it up with some Filipino pop, some "post punk" from the UK and Belgium, before finishing with some South African reggae and a tribute to the Korean alphabet. Something for everyone.

Regular readers know what you're going to get as the video clip when I'm off on my hols. But instead of the usual clip, here's the boys back together in 2004.

Posted by Ernie Goggins at 10:54 No comments:

To get you in the mood for the weekend, here are some vintage tunes from that fast-talking son of a gun, Daddy Freddy.

"The Girl Is Fine" - Daddy Freddy

He was at the height of his fame in the late 80s and early 90s, but Freddy has never really been away. Earlier this year he popped up, with many other old favourites, on Congo Natty's "UK Allstars":

Of course, Congo Natty himself has been around the the 80s as well, only then he was calling himself Rebel MC. Which gives me all the excuse I need to play this (not that any excuse is ever needed):