Newer readers may glance up at the strapline at the top of the page and wonder, what is "Bringing Tsonga Disco to the Masses" meant to mean? The veterans among you will know that when I started this blog eight years or so ago, it was specifically to share my love for the dance music of the Tsonga (or Shangaan) people of South Africa and Mozambique.

Most of the time the masses have been largely indifferent - and we have long since strayed from the purity of the original mission - but every now and then their interest gets piqued. In our own small way we have helped the likes of Awesome Tapes From Africa and DJ LeBlanc spread the good word to their hip and happening audiences.

And it appears the masses are having another burst of enthusiasm. The other evening I logged on and found three emails asking for help in tracking down music by Madlaks. According to one of them a "famous Dutch DJ" had been playing "Jikavonunu", they had fallen for it as I did, and their search had led them to me.

I was particularly pleased to learn that Madlaks and his "Ndlho Ndlho" album is getting more recognition, as that was the record that first made me fall for Tsonga disco. To celebrate, here's a couple of tracks from the album that we haven't featured before.

PS I was very disappointed to learn in a later email from the same correspondent that the famous Dutch DJ was someone called Young Marco and not, as I had hoped, DJ Sven. He's still the king!

Today is Mothering Sunday (a.k.a. Mother's Day) here in the UK, so this is for all you marvellous mothers out there. Especially Old Mother Goggins, the cream of the crop.

"Singing A Song For My Mother" - Hamilton Bohannon

Posted by Ernie Goggins at 08:49 No comments:

I spent 48 hours in Lusaka last week. Needless to say, I didn't get to see very much of the place, but the locals were lovely - including this fellow I met during a brief visit to a game reserve near the airport - and hopefully there will be chance to go back to Zambia again and have a proper look around. 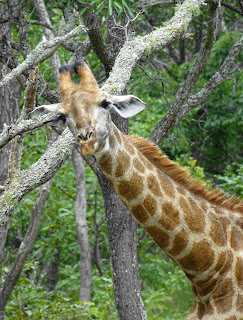 I didn't have the chance to go searching for sounds in central Lusaka, but I did pop into the small music shop in the arcade across the road from where I was staying. They didn't have a great selection - mostly gospel and Western pop - but I managed to find a couple of CDs that looked worth a try.

The first was "Mukachita Shani", the 2012 album by Brian Chilala. I don't know much about Brian but, if the website musicinafrica.net is to be believed, he is a former protege of Zamrock pioneer Paul Ngozi, who has featured here before. Not that Paul's influence is particularly obvious on this album.

There is not much point in me burbling on about Mr Berry and his extraordinary contribution to popular music, I'm not going to tell you anything you don't know already. So here's a handful of his marvellous tunes - five covers, one original. RIP Chuck.

"You Never Can Tell" - Emmylou Harris

A Question Of Toughness

On the face of it, Robert Wyatt may seem to be the odd one out. But it is him who provides our unifying theme: "If it's tough you want, then it's tough you got".

Posted by Ernie Goggins at 22:30 No comments:

Later today I'm off to Zambia for a few days' work. It will be my first visit, and I'm looking forward to it. I'm not going to be there long enough to get beyond Lusaka, but maybe there'll be a next time.

I don't have much Zambian music in my collection, so hopefully there will be a chance to put that right while I'm there. In the meantime, here are a couple of groovy tunes from the 'Zamrock' scene of the 1970s. The first one is particularly appropriate today.

Who Was That Masked Man?

It shouldn't take you too long to work out the identity of today's mystery guest.

"I Don't Want To Be A Lone Ranger" - Johnny 'Guitar' Watson 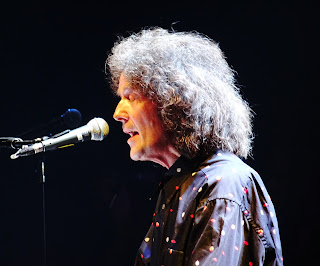 If you want the full story of Bitori you will need to go to elsewhere - I'll give you a clue, it's here. In brief, Bitori is an accordion player from the Cape Verde islands. He is a master of "funana", a musical style which has been around forever but was frowned on by polite society in Praia as being a bit common. The upshot was that, despite being a popular live act for decades, he didn't have a chance to record until the late 1990s by which time he was nearly 60.

Him and his band are still going strong - in fact, I'm hoping to see them at a festival in July - and those 1990s recordings were re-released on a CD called "Legend of Funana". Here are a couple of samples.

Here's another Natalia for you. At least I assume it isn't the same Natalia.

Posted by Ernie Goggins at 17:34 No comments:

A couple of heartfelt pacifist cries for you today. It's perhaps a little hard to believe that the first was a number one hit in the US in 1960. But it's even harder to believe that it made the top ten in the R&B charts. R&B? Really? Anyway, personally I prefer the off-beat charm of the unholy mess that is the "cover version" by John Lennon's favourite doper, David Peel.

I am no stranger to the pacifist cause myself. Back in my student days in the early 1980s - the last time that nuclear armageddon seemed like a realistic possibility - some friends and I went up to London to join a CND march. We were encouraged to sing anti-war songs, but then severely reprimanded by one of the more po-faced organisers when we started belting out the chorus to this one.