You know me as a taste-making, trend-spotting, genre-hopping surfer of the zeitgeist - and I would modestly suggest that I am all of those things and more. 😇, as I believe they say (or possibly 😉).

But sometimes, after a long hard day, I find I'm not in the mood for Tsonga disco or Bulgarian prog or psychedelic cumbia or such like. For comfort listening, I need some classic cowboy crooning, which means either Marty Robbins or Frankie Laine.

Last night it was Frankie's turn. Here are a couple of tracks from a CD called "Country Laine" which is a reissue of two 1961 albums, "Deuces Wild" and "Hell Bent For Leather!".

For an extra treat, here are a couple of fine cover versions of two of Frankie's biggest hits.

Bulgaria. Third in our series featuring the music of the 27 EU Member States, and one of only three that I haven't been to yet. Hopefully I'll get a chance to put that right. The word on the street is that Plovdiv is poptastic.

Outside Bulgaria, Trio Bulgarka are probably the artists of whom you are most likely to have heard. They appeared on a Kate Bush album in the late 1980s and along with Marta Sebestyen from Hungary were at the forefront of a brief craze for East European folk music around that time. I'm not sure the attempt to incorporate (then) modern sounds works in their favour, but it is certainly an improvement on the Singing Nun's disco period, which we featured last time out.

That is all pretty old stuff, so let's try and bring things a bit more up to date. The word on the trendier end of the aforementioned street is that Bulgarian Trap is all the rage, so here is some to sample. To my inexpert ears it sounds a lot like the Trio Bulgarka track. We then go back to 2007 to enjoy what may be the only time a Jew's harp (or the Bulgarian equivalent) has featured at Eurovision.

It's one of the most covered songs of all time, so it was inevitable that we would get round to featuring it in Single Song Sunday eventually. It is, of course, "Louie Louie".

We start off with the song that inspired the man who wrote the song that inspired them all, Cuban band leader Rene Touzet's arrangement of "El Loco Cha Cha". You will probably all be familiar with Richard Berry's 1955 "original". You'll certainly all know The Kingsmen's hit version from 1963 which really kickstarted the whole craze. And those of you from the UK and of a certain vintage may recall the mellower than you would expect version by Motorhead.

After that, we're all over the place. Toots & The Maytals provide the Mandatory Reggae Version. The Neighb'rhoods freak out. Mario Allison reclaims it for the Latin world with some late 60s Peruvian boogaloo, while Simba convert it into a slab of early 70s Afrorock. I can't find the words to describe what Barry White does.

Then we finish off with a song inspired by the FBI investigation into the version of the song that inspired them all.

"The Ballad of the Kingsmen" - Todd Snider 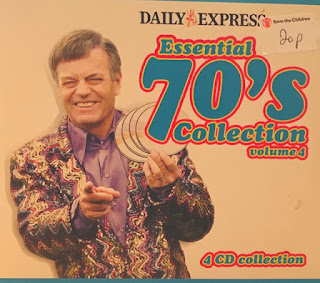 Some suitably smooth sounds for a Sunday morning, courtesy of Mr. Big Blow himself, Manu Dibango. If I tell you they're from an album called "Rasta Souvenir", you will be able to guess what style of music he was influenced by at the time of recording.

Today's clip has nothing at all to do with Mr Dibango, it's here because it makes me happy - especially the man who pops up about 20 seconds in.

Welcome to the second stop on our 27 date farewell tour of the EU. Today: Belgium. Famed for tasty beer, moules-frites and Mannekin Pis, two of which are excellent things.

Musically, Belgium is well known as the home of Jacques Brel, Plastic Bertrand and The Singing Nun - two of whom feature below, although not perhaps in the form you expect. But there is so much more.

We bring you some sex, some Sex Pistols, two fine slices of Belgian new wave from 1983, and the mighty Bobbejaan Schoepen. You really should read his life story, it's an amazing tale of how a Boy from Boom conquered the world, having been locked up twice by the Nazis for insolence and set up the Belgian version of Dollywood along the way. Fortunately the track I've chosen was recorded before he "lost his virtuoso whistling ability due to a surgical intervention".

"The Third From The Left In The Top Row" - 2 Belgen

If the combination of weather, politics and Monday morning has you feeling down, we have the perfect pick-me-up. Lakou Mizik describe themselves as "a powerhouse collective of Haitian roots music with a soulful energy an a mix of styles", and that is certainly true of their debut album "Wa Di You', which came out in 2016.

As "Poze" demonstrates, one of those styles is something remarkably close to Cajun music. So it maybe isn't a huge surprise that their new album "HaitiaNola" features many well-known New Orleans musicians as guests. I've not heard it yet but I'm definitely going to check it out.

For the video I had a look for "Haitian Divorce" by Steely Dan, but all I found were versions by an alarmingly large number of tribute bands. You deserve better than that, so here is some more from the lads and lasses of Lakou Mizik.

Posted by Ernie Goggins at 07:29 No comments:

I'm off to see Julian Cope tonight for the first time in forty years. Last time was on a Teardrop Explodes/ Thompson Twins double bill. Both of us were very, very young.

Here's a couple of songs he may perform tonight; then again he may not. My money is on not, but he's a hard man to pin down, Mr Cope.

As of last Saturday, the UK is no longer part of the European Union. Personally I think that's a shame, and it's an even greater shame that our politicians have spent the last three and a half years posturing and acting as if the world owes us a living rather than making any serious attempt to agree a deal that would work for everyone. End of speech.

We are now in a transitional period where everything carries on as before until the end of the year. I want to use the time constructively, so - inspired in part by CC and George's 'State of the Union' series - I am going to take us all on a musical journey around the remaining 27 member states of the EU. In alphabetical order, not in some random sequence that makes sense only to George's butterfly mind (speaking of which, George's Butterfly Mind may well feature when we get to Greece - they are up there with Aphrodite's Child as one of the finest psych bands of their era).

There will be some peaks, and I daresay there will be some troughs as well (the stretch from Latvia to Malta is looking particularly skimpy at the moment). But I hope we'll have some adventures along the way, and enjoy the wonderful diversity that Europe has to offer.

Let's get the show on the road. In its day, Austria was the happening place as far as music was concerned. Its day ended in 1899 when Johan Strauss II died (an event that prompted a young Udo Jurgens to rush out a tribute record called "My My, Fraulein Austrian Strudel"). It has had a few more highlights since. These may not be them, but at least they aren't DJ Otzi.

Steve Kekana was a big star in South Africa back in the 1980s, and is still going strong today. He was also a one-hit wonder in Europe thanks to "Raising My Family", which got as high as number three in Sweden and Austria and was a top 10 hit in Switzerland in 1983.

Steve hails from the exotically named town of Zebediela in Limpopo Province, where the majority of the population are either Northern Sotho or Tsonga. Steve is a Sotho, and throughout his career he has released records in that language as well as English. Today's tracks come from a compilation of his biggest Sotho hits from back in the day.

Steve has been blind since early childhood, just like this other Steve.