A Right Bunch Of Nancys

I have just had a few days in Spain - a bit of work in Madrid, preceded by a weekend in the fine city of Avila. While in Madrid I popped into Discos La Metrellata, which is one of my favourite record shops anywhere. It is underground and often mistakenly visited by people assuming it leads to the nearby underground car park. The length of time I spend in there depends on (a) how much time I have available and (b) whether the air conditioning is working. Fortunately the answer to (b) was yes on this occasion, so I was able to have a good dig round without fainting.

I'll share some of the goodies I acquired there with you shortly, but today's selection comes from the much smaller, but no less groovy, Discos 70 in Avila. What rational person could resist an album called "Gabba Gabba Nancy"? Not me, that's for sure.

The album is by an outfit called Nancys Rubias (The Blonde Nancys). As of 2007, when the album was made, the line-up was Nancy Anorexic, Nancy Transvestite, Nancy O, Nancy Reagan and The Real Nancy Blonde. If they are looking to recruit more members, they could do worse than sign up Shaky Nancy and Nancy Whiskey. By the sound of them, they would fit right in.

And an apology for talking utter rubbish as well. When I wrote this post on Prince Rhangani's latest album yesterday I repeated a claim I originally made a couple of years ago to the effect that he is Joe Shirimani's younger brother. I can't remember where I got that from - somewhere in Internetland.

The lesson I have learned is always to try to check a primary source, which in this case is the Prince's own website. While he has indeed worked closely with the Tsonga Svengali - most notably in a "super-group" with Joe and Benny Mayengani called Limpopo Poison - he is no relation. In fact about all I got right was that the album is called "Xiwitsi", that it came out last year, and that Messrs Shirimani and Mayengani feature strongly.

Sadly, if the word on the street is anything to go by, it appears that Limpopo Poison have recently split in acrimonious circumstances, with Joe going one way and Benny and the Prince another. This article places the blame squarely on the shoulders of Benny Mayengani, but we are not taking sides, just lamenting that they may not be teaming up to make music this good again.

To paraphrase Jimmy Webb, football's a harsh mistress. Our old friend Charity Chic and I spent yesterday with our respective mistresses at Cup Finals. While the Chic household - and presumably that of Jim McLean's Rabbit - must be shrouded with gloom this morning, here at Chez Goggins happiness abounds. 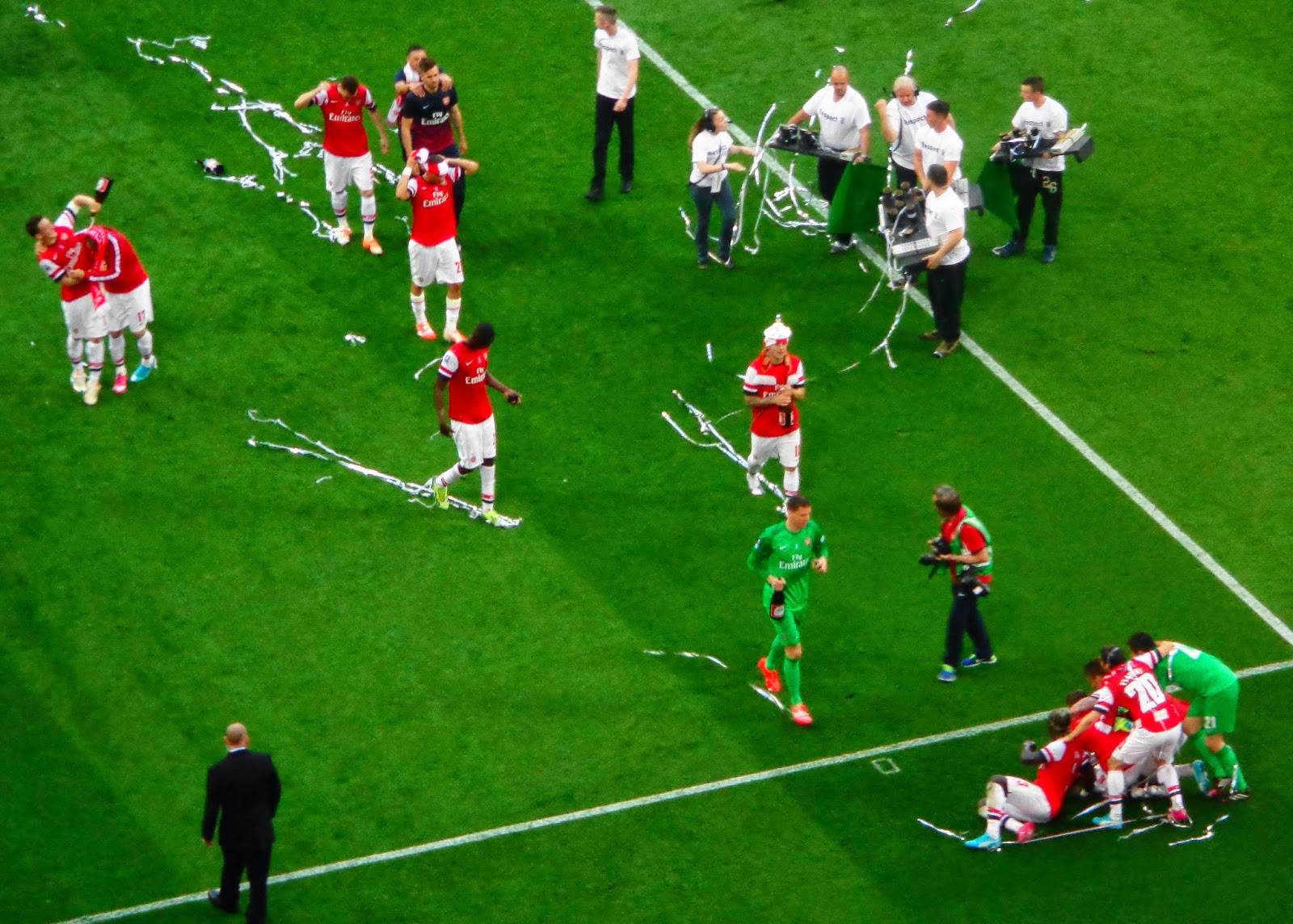 Those of you who, like me, are of the Arsenal persuasion will not need the significance of today's selections explained to you. Sing along now!

"She Wore A Yellow Ribbon" - The Andrews Sisters

Here is some delightedfully demented gospel courtesy of Reverend Douglas Bell and friends.

The Reverend makes a compelling case for prayer being more powerful than a nuclear bomb. But how does it match up against sex bombs and cherry bombs? You decide.

Posted by Ernie Goggins at 21:43 No comments:

It has been a while since I have featured some of the albums that those nice people at ReviewShine send me. Let's put that right with a couple of CDs from some top-notch women.

First up is an old friend. We have featured Kelsey Waldon here a couple of times before, and I had sort of assumed she was a grizzled veteran with many albums under her belt. In fact she is a distinctly ungrizzled 26 years old, and "The Goldmine" - which comes out officially next month - is her first full album. She has been living in Nashville for four years and, perhaps as a result, the sound on parts of the album is a bit more mainstream than on earlier EPs like "Fixin' It Up". But in moderation that is no bad thing, and there is still plenty of "proper country" there (with Kelsey's voice you could not eliminate it if you tried). One example is my particular favourite, "Quicksand".

The other album is from an artist who is new to me. Had I heard her before, you would have done too as I would have been straight on here to spread the word. She has a great blues voice with a bit of a country twang, which for some reason makes me think of Bonnie Bramlett - not so much the sound, more the general feel. Her name is Eden Brent, and her latest album "Jigsaw Heart" came out last week on Yellow Dog Records. Have a listen to "Panther Burn" and then, when you've snapped out of your reverie, go and buy the album.

[Update: I have been asked to take down the Kelsey Waldon track but don't hold that against them - buy the record and you'll get to hear it]

Speaking of quality female blues singers, here is a bit of Elkie Brooks. When I first featured Kelsey Waldon it was her version of "Only Love Can Break Your Heart", and I made some disobliging remarks about Elkie's disco version which caused great excitement among some of her fans. As I said at my subsequent trial, my problem is with the song not with Elkie. In recent years she has come back to the blues and shown us all what she can really do.

As any fule do kno, it is Eurovision tomorrow night.

A couple of weeks ago I found in a charity shop the official CD for the 2007 Eurovision contest, featuring all 42 entries. I took it as a sign and splashed out £1 on it. I should not have done. 2007 was not a vintage year, being won by a dreary Serbian ballad. Here are a couple of the more tolerable entries, from Bulgaria (5th) and Belgium (knocked out in the semi-final).

I am not foolish enough to bet on the result of Eurovision, having been wrong almost every year, but if I was my money would be on Conchita Wurst from Austria. Our woman with her people power song is an improvement on recent UK entries, but she can't compete with a striking bearded transvestite singing a power ballad about rising like a phoenix and being reborn.

As promised, here is the first of the batch of Tsonga CDs I brought back from South Africa. We start with Colonel Mhlongo, a new name on the scene who looks well set to be a force to be reckoned with for some time to come.

The Colonel (real name Amado Mhlongo) is from the Mozambique branch of the Tsonga family and, as befits a military man, is a protege of our old pal General Muzka. The General produced and co-wrote the Colonel's album "Mamazala", and it made a big impact on its release last year. The album was nominated as album of the year at the 2013 Xitsonga Music Awards, while the Colonel himself was nominated as best newcomer. Two tracks, "Vomadzendze" and "Machangana", were nominated for song and collaboration of the year respectively. So let's go for those two to save me having to make a decision for myself, which would be hard because it is an exceptionally fine record.

From Colonel Mhlongo we arrive, via a circuitous route taking in Colonel Abrams and Father Abraham, at this all time classic. That business with the receptacle on the right gets me every time. My enjoyment is even more genuine than that of Peter Powell.

"I Want To Hold Your Hand" - Sparks

"I Want To Hold Your Hand" - Swamp Dogg

"I Want To Hold Your Hand" - The Moving Sidewalks

"I Wanna Hold Your Hand" - The Thurston Lava Tube

"I Wanna Hold Your Hand" - Billy Bob Thornton & The Boxmasters

Here's Dollar. In the comments box under this video on YouTube someone has written "The Beatles' version is good, but this one is better". They call themselves Battywattywoo. Draw your own conclusions.

I mentioned earlier in the week that I brought back from South Africa a stash of Tsonga Disco CDs which I will start sharing with you shortly.

As regular readers will know, the Tsonga (or Shangaan) people come from Limpopo Province in the north-east corner of South Africa and over the border in Mozambique. But before we get there we are going to stop off in the north-west corner - the Northern Cape Province - home of the Nama people.

The Nama are a Khoi people who - as the name implies - are also found over the border in southern Namibia, and in Botswana too for good measure. And the mighty "Kalahari en Namakwa Treffers" album (Afrikaans for "Kalahari and Namaqua Hits") features the sounds that are rocking the towns from Port Nolloth all the way over to Upington, via Okiep, Nababeep and Kakamas.

Judging by this CD, the music of the north-west lacks the flair and funkiness of the north-east, but it is not without its charms. Some tracks are fairly standard Afrikaans "boere musiek" (literally, farmer music) - which is great news for all us fans of squeezebox and saxaphone combos - while others are closer to old-fashioned township jive. I think the Lingo Band probably come closest to merging them to create what I am choosing to call Nama Fusion in the hope of starting a trend. But the eccentric catchiness of the Elgenairs edges them ahead as my favourite track.

Of course, the Nama have not been without influence in the world of music. It was repeating the word "Nama" quickly several times in succession that inspired Piero Umiliani to come up with this timeless classic.