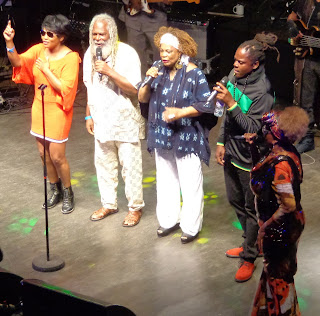 Posted by Ernie Goggins at 19:02 No comments:

A Load Of Cobblers

Some midweek chat for you courtesy of 1980s ragamuffin dude General Trees (that "trees" as in "one more than twos" - see also the old joke about two Irishmen failing to get jobs as tree fellers).

"This A The Boom" - General Trees

If Wikipedia is to be believed, General Trees made his living from shoe-making. So he should appreciate the quality of workmanship required for this. As for the rest of you, who knows.

Posted by Ernie Goggins at 20:34 No comments:

This Sunday our single song is "I'm Just A Country Boy". Best known through Don Williams' 1977 version, it actually started life as a Harry Belafonte B-side in 1954. I am not madly keen on Harry's version but it is included for historical reasons.

It wasn't just Harry. George McCurn (formerly of the Fairfield Four, gospel fans), Sam Cooke and Ronnie Lane all had a go before Don got round to it. After that, Alison Krauss changed it from the first person to the third person and Robert Ward changed the title completely for his excellent if ramshackle blues version, but it's the same song. Our Mandatory Reggae Version comes from Cornell Campbell.

There is allegedly a version by Richard Manuel from The Band which I imagine must be pretty good, but I couldn't find it. If any of you have it, any chance you could send it on over?

And here is something that isn't the same thing at all.

Hot of the presses, here are three brand new East African pop records for you. The first two come from a couple of old pals, Eddy Kenzo from Uganda and Teddy Afro from Ethiopia. Rounding things off we have Sauti Sol from Kenya - new to me although they have apparently been knocking about for ten years or so.

The message in Eddy's song is pretty clear, and one can hazard a guess as to what Teddy is saying. As for Sauti Sol, though, who knows?

Eddy is being helped out by Irish-Nigerian dancehall artiste Pat O'Rankin, which gives us all the excuse we need to feature this video from the similarly named Pat O'Banton (or as my lovely friend Pam calls him, Cousin Patrick).

Posted by Ernie Goggins at 20:44 No comments:

More from Armenia today, after which we will give it a rest (you may be relieved to know). Today's selections come from "Assorti 2", an mp3 compilation of recent Armenian hits. As the nice lady in Vanadzor market who sold it to me explained, "these songs draw equally on traditional Armenian melodies and modern American rhythms and production methods to create a magical musical melange". Actually all she said was "Armenia, Good" over and over again, but that was clearly what she was attempting to convey.

For our vintage video clip we recruit that well known member of the Armenian diaspora, Ms. Cherilyn Sarkisian. I hasten to add that the song title could never be applied to her esteemed countrymen and women.

Hello folks. I am back from Armenia and can thoroughly recommend it. The main reason for going is the amazing scenery, but Yerevan is worth a visit too. More specifically, you should make time to relax over a Kilikia beer or two at this zeitgeist-busting bar. 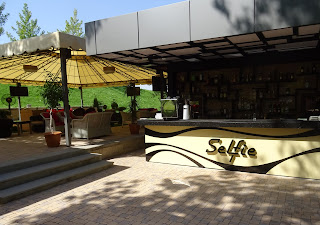 You will not be surprised to hear that I picked up a few local CDs while I was there. First of the rack is "Sazz & Jazz", a compilation album from 2013 which purports to provide jazzed up versions of traditional Armenian songs and melodies. I must admit I was not previously aware that the samba was indigenous to Armenia, but who am I to argue with Sona Shiroyan and his (or her) friends.

Let's keep it mellow with Mr Andy Williams. Not sure about the elbow patches though.

Posted by Ernie Goggins at 20:04 No comments: