We interrupt our normal programming to respond to an appalling piece of provocation by Mr Charity So-Called Chic.

Earlier in the week I politely asked that he feature some Steve Hillage on his admittedly excellent - although now tarnished - blog. I then said that if he was unwilling or unable to oblige I might do so myself. All very civil you might think. But not as far as CSCC was concerned.

His immediate response was to invite me to "knock yourself out". Over the next couple of days this was followed by a long series of messages including taunts such as "Come and have a go if you think you're hard enough" and "You and whose army?" which culminated in an instruction to "boil yer heid".

I can't just let that sort of thing go, so here is Steve Hillage with some music to boil heids by.

"It's All Too Much" - Steve Hillage

P.S. Some parts of this post may have been exaggerated for dramatic effect.

We are sticking with the European folk scene, folks, After Monday's trip to Cyprus we are heading north to the Häme region of Finland where we find Anne-Mari Kivimäki & Palomylly. Both today's tracks are from their 2019 album "Hämeen Lauluja".

Other musicians from Häme include some bloke called Jean Sibelius who languished in obscurity for many years until he got his lucky break when Strawberry Switchblade sampled his Fifth Symphony.

Posted by Ernie Goggins at 07:41 No comments:

Some of you may recall that last year we went on a musical tour of the EU to mark the UK's departure - which is really going very well, thanks for asking.

One of the bands that we featured during our stop over in Cyprus was Monsieur Doumani. Last week they played a free gig down the end of my road to promote their excellent new album "Pissourin". Very good they were too. 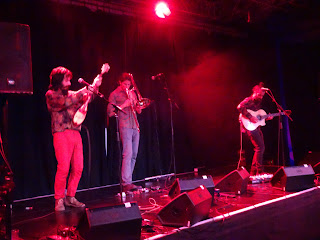 The lads describe their style as 'avant-folk' and there was a lot more of the avant live than there is on the record. Armed with just tzouras (a type of bouzouki), guitar, flute, trombone and a load of effects pedals they made a right groovy racket.

"Pissourin" and Monsieur Doumani's three earlier albums can all be found on their Bandcamp page, with the back catalogue priced at a bargain €5 per album. Head over there now, but before you go here is a track each from "Angathin" (2018) and "Sikoses" (2015).

Posted by Ernie Goggins at 05:50 No comments:

Here are four more songs from our extensive back catalogue that have been hand-picked for your delectation and delight by our celebrity DJs Charity Chic, George, Mister F and Spence. I used the same numbers as before but this time selected by date order.

I reckon CC's going to be pretty happy with his selection, I hope that the others are too.

"She Don't Have To See You" - Tommie Young (George)

We have some more Michael Marra and Bunny Wailer for you below. I couldn't find any clips of The Playboys or Tommie Young, but I managed to unearth a rather splendid rendition of "She Don't Have To See You" by the man who wrote the song, Mr Bobby Patterson.

Last week we notched up 5000 different songs on the blog. To mark the occasion I invited you to pick a number between 1 and 5000, stick it in the comments and I would give your selection a spin.

Four viewers took advantage of this once in a lifetime opportunity, and they more than make up in quality what they may lack in quantity. Many thanks to these stalwart individuals - Charity Chic, George, Mister F and Spence, Surfers of the Zeitgeist all.

In order to pad things out a bit I have picked out two songs for each of them. In the next post we'll have their selections based on their date of appearance, but for this one they have been selected using my normal sophisticated cataloguing system (alphabetically by name of artist, since you ask).

A pretty wild, wacky and worldwide bunch they are too, with hits from Spain, Turkey, Niger and.. Bristol. Many thanks to our guest pop-pickers, They've done a great job between them.

I've managed to track down some footage of three of the four of them (the artists not the stalwart individuals). Pau is in particularly fine form - and watch out for the guest appearance by Rob Davis from Mud about four minutes in.

Ton Steine Scherben were a German rock band who were big cheeses on the West Berlin squatting and anarchist scenes in the early 1970s - the limburgers of the radical left if you like. Probably more significantly in terms of their cultural impact, they were pretty much the first German language rock band with any sort of public profile at all.

"Keine Macht für Niemand" ("No Power For Nobody") came out in 1972 and was their second album. Obviously those of us who don't speak the German don't get the full impact, but it is still a decent listen even so. Here are a couple of tracks.

We have have treated you to some Zamrock - the Zambian rock scene of the 1970s - a few times over the years. It has always gone down well, so I thought you might also enjoy some similar sounds from their southern neighbour.

The inexplicably named Wells Fargo were leading lights in the Zimrock movement (strictly speaking it was called Rhodesia then, but Rhodrock sounds faintly unsavoury). A few years ago the excellent Now Again label put out a compilation of their singles from 1976-77. It is called "Watch Out!" after their most popular song and it is available on Bandcamp. It's a cracker.

There are no videos of Wells Fargo in their pomp, but a couple of them feature in this mini-documentary about the scene that the label made to coincide with the reissue. And then, in an abrupt change of tone, a song that mentions the band. At least I think it is the band.

Posted by Ernie Goggins at 07:03 No comments:

If you read Monday's post you would have seen that we were two short of featuring 5000 different tracks on here (we are a fair way over the 5000 total tracks if you count repeats). It is taken the best part of 13 years to reach that milestone, and to mark the occasion I want to enlist your help.

Stick a number between 1 and 5000 in the comments and when there are enough of them I'll dig out the tracks that match the numbers on my spreadsheet and include them in a sort of 'Best of the first 5000' post.

In the meantime, to see us over the line we have enlisted the help of Ry Cooder and Panadda Chayapark (or Ry 'n Thai as they were billed back when they used to tour together).

And to kick off the next 5000 in fine style we have our old friends The Incredible String Band with what is probably my favourite track from what is definitely one of my all time favourite albums, "5000 Spirits Or The Layers Of An Onion".

It Was The Worst Of Times...

It's Monday morning. The coffee hasn't kicked in yet and I'm not feeling in the least bit creative, so I am interpreting the brief for today's post very literally indeed.

"If It's Monday Morning" - Lee Hazlewood

"On A Monday Morning" - Rachel Unthank & The Winterset

Incidentally, according to the records that I rather sadly keep, today's selections mean that we have now featured 4998 different tracks since we started off way back when. I may have to do something to mark our impending millstone milestone. Until then though...

Today is the last post in our mini 'New Round Here' series. Presenting Senegal's own Touré Kunda with two tracks from their fine 1983 album "Amadou Tilo". Apparently the two brothers who form the core of the band were born 22 days apart. Poor Mrs Touré.

Posted by Ernie Goggins at 05:22 No comments:

Next in our brief series, in every sense, of old faces who are new to here we present Maryland's own - and also Knaresborough's own - Bill Callahan. Take it away, Bill!

"Too Many Birds" - Bill Callahan

The list of other famous sons of Knaresborough consists only of Rene from 'Allo 'Allo and a bloke who briefly played keyboards for Simply Red. Neither of those could be considered conducive to a good moaning so let's stick with Bill.

I'm a bit snowed under with work in what passes for real life, so this week's posts will be brisk and business-like with much less of the usual inconsequential burbling.

The other thing they will have in common is they will feature acts who have never been seen here before even though we are nearly 13 years and 5000 different tracks in. First up, reggae's own Rod Taylor.

Other Rods are also available.

We head towards the weekend with some sweet soul from The Fiestas. They formed in the late 1950s and had a big hit in 1959 with "So Fine". Today's selection come from the tail end of their recording career nearly twenty years later.

By this time the lads were eking out a living on subsidiaries of bigger labels. "I Can't Shake Your Love" was issued in 1975 on Respect, part of the Stax stable, while the magnificent "I'm Gonna Hate Myself" from 1977 was tucked away on Chimneyville, a Malaco subsidiary. In a just world it would have been a massive hit, but we all know that it isn't a just world.

"I Can't Shake Your Love" - The Fiestas

"I'm Gonna Hate Myself" - The Fiestas

Posted by Ernie Goggins at 00:34 No comments: