Today being St. Andrew's Day, this one is for our Scottish readers.

Over the course of his career the late Bard of Dundee, Michael Marra, recorded a number of songs about famous visitors to Scotland. Here's a small selection. I'm not convinced all these tales are 100% factually accurate, but who am I to question the Great Man.

If you thought you were going to get a Dr John video after that last track, you were wrong. You'll need to listen to the King Kong song to know why I've gone for this instead.

A Long Song On Monday

Today's post is a combination of a tribute and a stopgap, although the fact it is the latter should not in any way detract from the sincerity of the former.

I've just got back from Genoa, a fine, lively city that is worth a few days of anyone's time. Later in the week I'm off on a work trip and I don't have a lot of spare time before then, so I thought I would do a quick post tonight in case I don't get another chance for a week or so.

The more discerning among you may already be familiar with Drew's excellent "Monday's Long Song" series, one which I notice has now attracted a number of other equally high quality contributors. As it happens, the only CD I bought in Genoa - an Italian 1970s prog rock compilation going for €1 in a junk shop - includes a track that fits the brief perfectly, clocking in at 18 and a half minutes.

So here it is. I haven't listened to it yet, and very possibly never will. Apologies if it is awful.

I have called this post "A Long Song On Monday" rather than "Monday's Long Song" in recognition of the fact that this is a cheap market stall knock-off of a post, and should not be confused with Drew and the others' finely crafted originals.

At the beginning of the year I finally got around to getting a flag counter for the blog. At first there were visitors from "new" countries almost every day, and the counter was clicking along merrily. Things inevitably slowed down and for the last few months we have been becalmed in the 90s, like a cricketer worried about giving their wicket away before they reach their century (a simile I realise will be utterly lost on most of those 90+ countries).

But all that has changed in the last 48 hours. Yesterday we had our first visitor from Togo, which took the total up to 99 countries. Then this morning, some lovely person in Bosnia & Herzegovina popped by to bring up the century.

To celebrate the occasion, here are a couple of tracks each from the homelands of our two newest friends. We have featured a couple of Bosnians before, but I think these are the first Togolese artists here. We top things off with what may be the weirdest ever performance at the Eurovision Song Contest. I love it.

Posted by Ernie Goggins at 21:11 No comments:

I hadn't planned on posting anything today, but the plumber I'm sitting at home waiting for is now four hours late and counting and I'm clearly not going to make it in to work today. I could complain that the day is wasted, but instead I see it as an opportunity to do something more important than mere work. So I have strapped my zeitgeist skates on, and off we go.

While today's post is unscheduled, that does not mean it won't be welcomed by the many lovers of 1970s Serbian folk-rock that make up my core audience. I have great pleasure in presenting Suncokret with a couple of tracks from their one and only album, 1977's "Moje Bube". "Suncokret" means "sunflower", but you probably knew that already.

In The Lee Stylee

A couple of slabs of 1980s dancehall from the illustrious King Jammy's stable, courtesy of Robert Lee and his friend Bunny General. Yes, it is that "Midnight Hour", but with added violence.

Readers of a certain vintage will quickly work out the link to today's video.

Posted by Ernie Goggins at 19:07 No comments:

Welcome back to the final instalment of our series featuring songs about corners. I have a few others but we've either shared them in a non-themed way before or they are not really good enough to place before such a discerning audience as you.

We kick things off with an old song from Noel Coward which seems sadly more apt than ever these days. Then we'll bop about a bit with The Ad Libs, before taking a walk on the country side.

"There Are Bad Times Just Around The Corner" - Noel Coward

"Down On The Corner Of Love" - Buck Owens 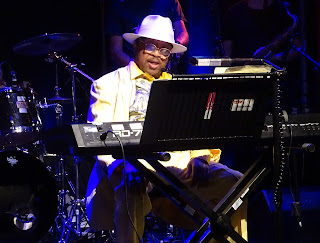 Anyone else remember the short-lived "electro list songs" craze of the early 1980s? It briefly looked like being the next big thing, before it was usurped by the cool jazz sound of Blue Rondo a la Turk and the like. Anyway, here are a couple of typical examples of the genre.

"The Human Factor" - Music For Pleasure

I had been looking forward to seeing Tamikrest in concert in London next week, and then I learned yesterday that they have had to cancel because the Home Office won't give them work visas. This is the third time this has happened to concerts I had tickets for in recent years, and on each occasion it was African performers who were affected - not a coincidence, I fear.

As a slight consolation for me, and a treat for the rest of you, here are a couple of tracks from the mighty Tuareg masters.

It has been a while since we've done one of these, but Single Song Sunday is back. This time out we are featuring Donovan's hippy standard, "Hurdy Gurdy Man".

We start with the original release from 1978,and then the rest proceed in chronological order. First comes Argentina's answer to Sonny & Cher who rushed their version out the same year, then Eric Mercury (no relation) injects a bit of soul into proceedings with this take from his 1969 album "Electric Black Man".

Next comes what is possibly my favourite version, by Steve Hillage from 1976 - heavy but still hippy, and check out the live version in the clip which goes full freak out. And we finish things off with a cover that rocketed to number 98 in the UK charts in 1990.

There are plenty of other versions out there but frankly they are all crap. And despite extensive searching I have been unable to find a Mandatory Reggae Version. Apologies.

There is absolutely no connection between these two tunes apart from the fact they both turned up on my iPod shuffle earlier this evening and I found myself shuffling along. Fortunately the office was empty apart from the two lovely cleaning ladies, and they are used to it by now.