Someone has dropped off a boxload of sleeveless Arabic pop CDs at one of the charity shops I occasionally frequent. They are going for 50p each, so I took a punt and picked up half a dozen, chosen more or less at random.

My initial research reveals I have acquired three from Lebanon and one apiece from Egypt, Iraq and Algeria. The Algerian CD is "Dellali", the 2001 album by Cheb Mami - the only artist out of the bunch that I had heard of previously. Here are a couple of the highlights.

I'm not sure whether Mami is pronounced "Mar-Mi" or "Mammy", but for the purposes of today's video I'm going for the latter.

I got back from my travels this morning. I'm a bit discombobulated due to a combination of a long overnight flight and the dreaded lurgy, but thought I should try to get back in the saddle.

I'm not yet up to generating original ideas for posts, so have decided to contribute to (or nick from, if you prefer) the old Monday's Long Song genre.

I have been off visiting family in Cape Town, which explains the first choice. "Mannenberg" was written about the destruction of District Six, and the song itself then become one of the theme tunes for the fight against apartheid.

Today's second selection is a little less mellow and more obviously political - neither of which will come as a surprise to you when you see Fela Kuti's name is attached. It is here as a robust variation on "Taxi for Theresa May".

Later today I'm heading off to spend a bit of time with old Ma and Pa Goggins, but before leaving you in the lurch I thought I would try out a potential new series on you.

Regular readers will be familiar with our long-running but increasingly intermittent 'Single Song Sunday' series which - as the name suggests - features different versions of the same song. As a sort of variation on that theme, I thought I would have a go at cover versions of different songs from the same album.

I have started with a nice easy one in "The Beatles" (AKA The White Album). There are some right crackers here - I'm particular fond of Fats Domino's effort - and "Bungalow Bill" may sound better in Finnish because you can't tell how ridiculous the words are. As is traditional, John Holt rounds things off with the Mandatory Reggae Version.

Let me know if you think this is a series that is worth persevering with. I'm not sure it will be quite as straightforward trying to do "Fulham Fallout" by The Lurkers, or any of my many Gentle Giant albums, but I could give it a go.

We'll sign off with the big hit cover version from the White Album. See you in ten days or so.

Have You Ever Heard The Reign?

Even we zeitgeist surfers have the occasional blind spot. For me, one of them was Reigning Sound. Until a couple of weeks ago I had never heard of them, even though they have been knocking about Memphis and Asheville for the best part of twenty years and play on at least one album I own (the great George Soule's comeback album, "Take A Ride").

Then I heard a couple of tracks from "Abdication... For Your Love", recently reissued by Merge in the UK, and I realised instantly I had a lot of catching up to do. Here is a track from "Abdication", along with the title track of their 2002 album, "Time Bomb High School".

By the sound of it, the lads of Reigning Sound would be well advised to try to get a transfer to another school. This one, maybe.

Posted by Ernie Goggins at 10:11 No comments:

Last time out we featured Lonnie Holley. If you liked that, then you're going to like this six times as much.

"Baby Without You" - Lonnie & The Legends

"I Found A Love" - Lonnie Mack

"Down By The River" - Lonnie Youngblood

I had a real treat last night when we went to see Lonnie Holley play in the church down the end of my road. I really can't do justice to him or his extraordinary life story, but this feature in The Guardian last year makes a gallant attempt to do so.

The short version is that Lonnie is a highly regarded so-called 'outsider' artist whose works have been displayed in museums all over America, from the MOMA and Smithsonian on down. He has been making and recording music privately for many years, originally using a second-hand Casio keyboard and a karaoke machine. He made his first album in 2012 and his third album 'MITH', released last year, has rightly generated a lot of interest. 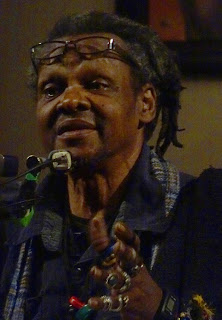 Lonnie played keyboards last night, accompanied by two of his regular collaborators on drums, trombone and effects. The first part of the set was a little bit one-paced at times, to be honest, while still being pretty good. The best bits sounded like a Donny Hathaway album (if the album in question was "Donny Hathaway Sings Songs About Space Ships And Air Conditioning Units").

As the set progressed they went up a gear or two. The extra oomph suited both Lonnie's songs and voice, bringing out their preacherly qualities (appropriately given the venue). They finished on a real high with "I Woke Up In A Fucked Up America" and a plaintive but funky love song to Siri. Yes, that Siri.

I would recommend investing in "MITH" if you haven't already done so. Until it arrives, here are a song apiece from his first two albums, "Just Before Music" (2012) and "Keeping A Record Of It" (2013).

A real treat for you today. Some fabulous slices of French pop to take you back to the Swinging '60s from the magnificent Fabienne Delsol. A glorious mix (or mélange as the French might say) of ye ye and what, following our earlier request for clarification, the Académie française has confirmed should be called le cadence de caprice.

Not that they actually date from the Swinging '60s. Fabienne, who is properly French but was living in the UK at the time, made a handful of albums for the Damaged Goods label in the 2000s. These top tunes are both from her debut album, 2004's "No Time for Sorrows".

"When My Mind Is Not Live" - Fabienne Delsol

"Don't Fall In Love With Me" - Fabienne Delsol

Also on the album is Fabienne's cracking cover version of France Gall's "Laisse Tomber Les Filles". But, good as it is, you can't top the original.

From Cuba To Croatia

This should set you up nicely for the weekend. Some vintage Cuban sounds, from a Luaka Bop compilation called "Cuba Classics 2".

I found it in a second-hand record shop in Zagreb. I wasn't aware that Cuban music is popular in Croatia - maybe it isn't if it is only found in the dustier corners of second-hand shops.

Legend has it that Los Van Van named themselves after their hero Van McCoy, although I can't guarantee that is true.

Posted by Ernie Goggins at 08:26 No comments: