Sneaking a quick one in to get me to a round 100 posts this year. I'm off to a Hawaiian themed evening in my local, the excellent Eleanor Arms. Mine Host Frankie will be manning the turntables in his usual unique way. I doubt any of these will be making the playlist though. The Warren Zevon track in particular would kill the mood at even the chirpiest of parties.

This, on the other hand, should be compulsory. I'll be singing it to my dear friends just as soon as we finish "Auld Lang Syne". I hope you will all do the same.

I have to confess to having been utterly useless when it comes to spreading the Tsonga love this year. I have no excuse - I have a decent-sized pile of CDs that I picked up in South Africa back in April just waiting to be shared with you, but for some reason I haven't got round to doing so. It's time to start putting that right.

Here are a couple of tracks from an artist new to us, Xikhongolotani, both taken from his album "Leswinga Mbilwini Yamina". If you are planning a party tomorrow night, you could do worse than stick these two on to get it going.

As feared I have not got round to sorting out Part 2 of a review of 2015. Suffice to say it has been a good year for live music, with gigs by Hiss Golden Messenger, Marcia Griffiths and Mexrrissey (the Mexican tribute to Morrissey) among the highlights.

However if I had to pick out only two live music memories from this year the first would be Peter Spence and True Identity's storming rendition of the old gospel standard "I'll Fly Away" in Catford of all places - sadly not captured for posterity - and the second would be this:

You would think that with the current troubles in Yemen not even the most dedicated "crate digger" would want to go over there to browse through the second shops of Sana'a. But somebody did, and they came back with the tracks that comprise "Qat, Coffee & Qambus", a fine compilation of Yemeni 45s from the 1960s and 1970s. Here are a couple for you.

I suspect nobody other than Mister F will get the connection with today's clip. I hope not anyway.

Posted by Ernie Goggins at 20:59 No comments:

Well I never said it was THAT season, did I?

I went to my friend Brandon's 8th birthday party yesterday, where a good time was had by all - after a bit of whining on my part his Mum gave me one of those bouncy rubber balls that flash brightly on impact with the ground, which are far too good to be wasted on children.

Anyway, while at the party I got talking to Joel from Trinidad. As inevitably happens when I meet someone from Trinidad, the conversation eventually turned to calypso. And conversation about calypso inevitably turns to the greatest calypsonian of them all, Mighty Sparrow. It has been a fair while since we featured him. Joel has given me the prompt I needed to put that right.

"Ten To One Is Murder" - Mighty Sparrow

From Sparrow to a bird of a different variety. This song helped me win a pub quiz in Leeds once. If it is the answer, what the question? First correct answer gets a Christmas treat of some sort.

Well, I call it Part 1. Whether there is a Part 2 depends on whether I can get my act together blog-wise, which has not been my strong point recently. Anyway, here are some tunes I have enjoyed this year. I hope you do too.

"Stepping Out Of Babylon" - Etana

In what passes for real life, the main event of the year for me was resigning from my job so I can try other things next year. I put it a bit more graciously than Johnny Paycheck when I broke the news to my boss, but it amounted to the same thing.

Last night Mister F and I went to 229 Great Portland Street to see the reformed Any Trouble promoting their new album, "Present Tense". While admittedly they do not exactly exude the menace that might help them attract a more youthful crowd - as this shot of frontman Clive Gregson demonstrates - it was still a travesty that they were shoved down into the basement as the main room was booked for a Style Council tribute band. 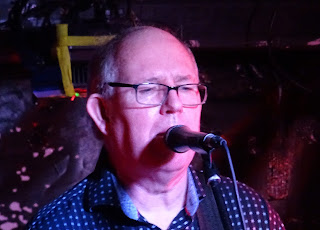 The only songs I knew were the old singles from 35 years ago, two of which we have for you to enjoy. The new stuff was pretty good and in a similar style, so if you like these you might want to check the new album out as well. I've bunged in my favourite (alright, only) Clive Gregson solo song as well.

"Girls Are Always Right" - Any Trouble

"I Love This Town" - Clive Gregson

Any Trouble's new single is called "Glen Campbell". In what may or may not be a spooky coincidence, Glen performed Paul Westerberg's "Any Trouble" on his "Ghosts On The Canvas" album. But which of them is the best? Decide for yourselves...

A variation on our occasional theme - three different songs with the same title, all of them excellent. Includes the Mandatory Reggae Version courtesy of Mr Errol Dunkley. As a bonus, we have added a song by some Amazing guys about a slightly less amazing love.

"Your Love Is Amazing" - Eddie Floyd

"Your Love Is Amazing" - Robert Ward

"Your Love Is Amazing" - Errol Dunkley

Posted by Ernie Goggins at 18:39 No comments: