Apologies for being a bit irregular recently - real live and stuff. And it's about to get worse, as I have got a lot of travelling for work coming up over the next four or five weeks, starting tomorrow for ten days taking in the unlikely combination of Korea and Slovakia (and a brief stop at home to change my socks).

So I'll do what I normally do when I'm going to be away for awhile, and revive some of the songs I played back in the very early days of the blog, when you were all still children.

"Come Along With Me" - Arthur Alexander

"Kooeoaddi There" - The Incredible String Band

And as an extra treat, here is the first video clip we ever featured. And it's a cracker. See you in November!

Posted by Ernie Goggins at 19:04 No comments:

In The Land Of The Blind

A couple of choice slices of reggae DJing from King Sighter, both on his 1978 album "The One Eyed Giant". 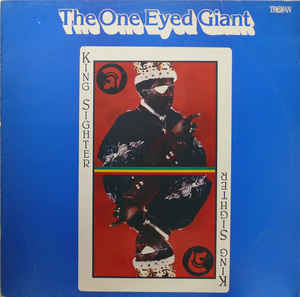 King Sighter's splendid eye-patch got me searching YouTube for videos of other musical eye-patches for today's clip. For people of my generation Moshe Dayan always comes out top of the list, but as none of his Israeli prog rock releases ever bothered the charts there are no suitable clips on video. Having dismissed the claims of Gabrielle in an instant, I arrived inevitably at the great Ray Sawyer.

Posted by Ernie Goggins at 22:54 No comments:

The Band of Make Believe

Some early seventies soul for you tonight, courtesy of The 8th Day. One of the acts that released records on Holland-Dozier-Holland's Invictus label, the jury seems to be out as to whether - at the time that these two tunes came out - they were a "real" band at all.

Wikipedia seems to think they were 100 Proof Aged In Soul under another name. Other sources think it was a name used by H-D-H to release songs they had recorded with a rotating cast of studio musicians. All sources agree that The 8th Day had a great career in front of them until H-D-H made the mistake of putting together a permanent line-up, after which they disappeared without trace.

Which leads us naturally to another "Eighth Day". Has anyone ever come up with a better song lyric than "Let's make some germs, we'll frighten the worms"? I think not.

I was in Athens the other day and took a stroll down Skoufa Street. It is awash with Hellenic hipsters these days - bearded bods drinking coffee from jam jars, the whole works. So when I turned off at Sina Street, popped into my favourite local second hand record shop, and found a CD proclaiming itself to be "the definitive Greek indie/ alternative compilation", I felt inspired to buy it.

The CD is called "Radio Spectrum", it came out in 2013, and if it is supposedly definitive then I feel no desire to explore that particular scene further. I found the bands all a bit dull and samey, rather like hipsters. Here are a couple of the better efforts.

"What Are The Chances" - Dusk

I was in Dublin for a couple of days earlier in the week, and managed to find time for a quick trawl in some of the charity shops as well as a visit to the always excellent Freebird Records. I picked up a few goodies that will no doubt find their way onto here in due course.

One of the charity shops was selling CDs that had lost their cases and covers. At 50 cents each I thought it thought it was worth trying a lucky dip, so I bought two that had no information of any sort on the CD, just fancy artwork.

The first turned out to be "Body Riddles" by Clark, released in 2006 - not my cup of tea at all, but it may appeal to those of you who like that sort of thing. The second was much better - 2002's "Lost Horizons" by Lemon Jelly. It includes their hit "Nice Weather For Ducks", which I have always liked, and there are a couple of other decent tracks in a similar vein. I doubt I'll listen to it all the way through very often though.

Posted by Ernie Goggins at 16:47 No comments:

We have ignored the US Presidential election up to now but I have just been informed that it is a statutory requirement for all blogs to refer to it at least once between now and whenever it is in November that the horror ends (or the true horror begins). So for compliance purposes only, here are some songs more or less loosely inspired by previous Presidents.

"Bonzo Goes To Bitburg" - The Ramones

And if you want to know who I'm backing, I'm with Over The Rhine.

Posted by Ernie Goggins at 22:33 No comments: