That Was The Kit

It was my second gig of the year yesterday - This Is The Kit, promoting their fine 2020 album "Off Off On". For obvious reasons this was the first chance they have had to do so. 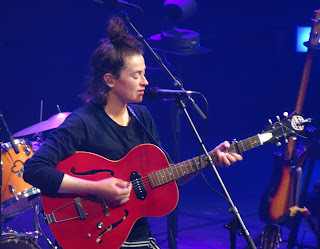 I have had the pleasure of seeing various line-ups of the Kits in various venues over the last ten years or so, including one that was just Kate and a newly recruited guitarist in a room out the back of our local vegan cafe (at that point Kate was not a big enough name to get a booking in the actual cafe itself). This was the first time I have seen them with a horn section but it works really well with the newer material.

Here are a couple of oldies but goodies. I will dedicate "Silver John" to my friend John who accompanied me last night and also to the vegan cafe, but I will let each of you decide who you want to dedicate "The Turnip" to.

"Silver John" - This Is The Kit

"The Turnip" - This Is The Kit

I recently acquired an old Soul Jazz Records compilation called "Hustle! which consists of reggae cover versions of disco hits, None of the songs on there are ever likely to feature in the Single Song Sunday slot, so I thought I would share a couple of Mandatory Reggae Versions with you now instead.

I enjoyed the album but a lot of the tracks are not that different to the original - there is a very nice version of "Don't Let It Go To Your Head", for example, but it is only a mild lope away from Jean Carn. So I have chosen two that made a bit more effort.

They have other attractions as well. In the first track, the lead singer - yet another Campbell I believe - appears to sing that "it's like pissing in the ocean" 45 seconds in. As for the second, she's called Carol Cool!!! What more reason do you need?

The Queen of May

On Sunday I went to my first gig since February last year, and it wasn't just any gig either. It was the magnificent Shirley Collins, still sounding fantastic at 86. 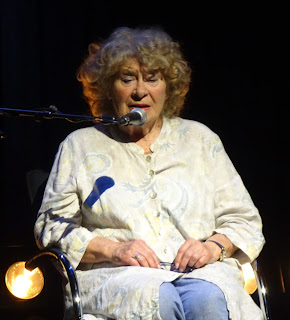 Shirley and her band mainly played songs from last year's "Heart's Ease" and 2016's "Lodestar", which was the album that marked her return to recording after about a quarter of a century. For most of that time she suffered from dysphonia and so was unable to sing at all. It is a blessing for all of us that she finally recovered from that.

"Heart's Ease" is, in my humble opinion, as good as anything Shirley has ever done. It is available from her Bandcamp page and all good online stores. To accompany your purchase, here is a track from "Lodestar" and another from "No Roses", her 1971 album with the Albion Country Band.(aka Fairport Convention plus Shirley's sister Dolly).

One of the old songs Shirley has recorded on "Heart's Ease" is "Canadee-i-o". Her version is great but for me you can't beat Nic Jones, so I have added that as a little bonus for you.

And now the biggest treat of all...

The Brilliant Boy Is Back

I hope you all had a brilliant weekend. I did. With restrictions beginning to lift around here I was able to get to my first live football match for six months and my first gig for 15 months. More about the latter later in the week.

Speaking of Brilliant, here are a couple of top tracks from Ekambi whose name is nearly the same as that. I realised this is very contrived but it was only after preparing the post I spotted his surname was Brillant not Brilliant and I was too far gone to turn around by then.

Both tracks come from a compilation of his best bits called "African Funk Experimentals (1975-82)". We featured the album last year and encouraged you all to buy it immediately. If you were foolish and did not to do so then, you can get it on Bandcamp for a bargain £7.50 now.

Mr Brillant was born in the village of Dibombari in Cameroon in 1948. After moving to Douala in the early 1970s he went on to become one of the movers and shakers of the local music scene. Understandably, as his music more than lives up to the promise of his name. The whole album is Utterly Ekambi.

Posted by Ernie Goggins at 06:37 No comments:

Among the goodies I found in the bargain bins on a recent trip to my local second-hand record shop was "Cover Your Tracks", a 2019 EP by Corb Lund. Being a clever bunch, you may be able to deduce from the title that it is a covers record.

The undoubted highlight is this fine rendition of Marty Robbins' "They're Hanging Me Tonight". The original version was Side 1, Track 5 on Marty's classic "Gunfighter Ballads and Trail Songs" album. What better to pair it with than Side 1, Track 6.

"They're Hanging Me Tonight" - Corb Lund

To complete the sequence, let's flip the record over for Side 2, Track 1.

Today have a sort of mini Single Song Sunday minus roughly six songs including the Mandatory Reggae Version (and, indeed, minus Sunday).

Randy Newman's original version of "Louisiana 1927" is pretty good by most standards. But put it next to this magnificent live post-Katrina version by New Orleans' own John Boutté and it pales by comparison.

Posted by Ernie Goggins at 07:06 No comments:

The Campbells Are Coming

A clutch of Campbells for you today - Al, Cornell and Michael. Not one of them straight outta Argyll.

"Hit Me With Music" - Al Campbell

"Mash You Down" - Cornell Campbell

Some of you will get the next reference, but for many of you I suspect it will just be a random jumble of words. Sorry. Here goes.

I've got a fever. And the only prescription is More Campbells!

A new release for you today or, to be more accurate, a new re-release. With some alleged mystery star guests.

Mark Fry's "Dreaming With Alice" LP came out in 1972 and is considered by connoisseurs like the good people at the 'Head Heritage' site to be a bit of a lost classic - their review is almost as entertaining as the album itself. It is being reissued today on vinyl and CD by Now Again Reserve Records and I would recommend you check it out.

A personal favourite track is "The Witch". which some clever person has matched up with the witch from The Pogles (who also gets a mention in the Head Heritage review). Warning: this is probably the least mellow track on the album, so if unhinged freaking out is your thing then Mark Fry may not be for you.

Here are a couple more witch-related tunes of a roughly similar style and vintage to keep you in the mood.
"Witches Hat" - The Incredible String Band
"Witches Promise" - Jethro Tull
And now to unveil the alleged mystery star guests. If you read the Head Heritage review you may recall the reference to the backing band being a group of Scottish musicians whose names "have been long forgotten thanks to the quantity of weed which was their other main contribution to the recording".
Well, Now Again Reserve Records make the sensational claim that these mystery musicians were... Middle of the Road!
I have no idea whether that can possibly be true. But I really want it to be.
Posted by Ernie Goggins at 07:55 7 comments:

Some 1980s soca for you today courtesy of Tobago's own Robert "Lord" Nelson, who is not to be confused with the bloke on the pole.

I'm pleased to report the good Lord is still going strong at 91. Here he is in concert way back when he was a mere stripling of 90.

The Road To Ride

A few weeks back I played a track from a great compilation of vintage Czech rock, blues and jazz called "Rock Line 70-74". This generated some excitement among the Portuguese goat herding community (but nowhere else as far as I can tell).

Anyway, I owe them an apology after a recent blog title caused offence, so here are some more cool Czech sounds. This one goes out especially to all the billies in Braga.

We finish the week with some smooth soul from Ronnie Dyson. This took some negotiating as Ronnie refused to help us out until I was able to guarantee him that there would be no tax liability as a result of being featured here. Him and his cousin James, they are like two peas in a pod.

Being a bunch of sophisticates you will have spotted that "Emmie" is a Laura Nyro cover, so let's round things off with the Great Lady herself.

Posted by Ernie Goggins at 07:18 No comments:

Change The A To An I

On Monday we featured a Candy, today we feature a Cindy. Cindy Lee Berryhill, to be precise. Here are a couple of tracks from her excellent 1996 album "Straight Outta Marysville".

Contrary to her claim in the album title, Cindy does not come straight outta any one of the 12 Marysvilles in the US (or the four in Canada or the one in Australia), having been born in Silver Lake in California. But someone who did was the legendary Moondog, born 105 years ago this month in Marysville, Kansas.

I went to my local second-hand record shop on Friday for the first time since The Great Reopening. After sanitizing scrupulously I had a good old rummage around in the bargain bins and found some goodies.

"When The Big Day" - Candy McKenzie

Posted by Ernie Goggins at 07:24 No comments: