You're an intelligent bunch, so I'm sure you don't need me to point out the connection.

"Imagine Me, Imagine You" - Fox

Last time out I posted a video featuring the great Mariem Hassan, which led me to dig out her albums for the first time in ages. I haven't listened to anything else since. So here's some more Mariem, starting with the song from the video.

The People of El Aaiún

We're off on one of our regular visits to North Africa courtesy of the always excellent Sahel Sounds label. Today it is Western Sahara or, to be entirely accurate, the Sahrawi refugee camps just over the border in Algeria where the supporters of Polisario are exiled. The band is El Wali, the album is "Tiris", and you really ought to buy it.

"Youth Of The Nation" - El Wali

A lot of fantastic music has come out of the Sahrawi camps over the years, the most notable being that made by the late, great Mariem Hassan. Here she is.

It is the first Single Song Sunday of the year, and the choice is such an obvious one I was under the impression I had done it before. But it seems I was wrong so here, for the first time, is Bordleaux Bryant's classic "Love Hurts".

We start with what are probably my three favourite versions - the Everly Brothers original from 1960, Roy Orbison's version from the year after and Gram and Emmylou's great duet from "Grievous Angel". Following them we have the two hit versions from the 1970s courtesy of Nazareth and Jim Capaldi. Fife's finest were the most successful everywhere but the UK, where Jim inexplicably made it to the Top 5.

Next we have what might seem an unlikely duet between Little Milton and Lucinda Williams. I'm a fan of both of them, but to be honest I'm not sure this arrangement really plays to Big Lucy's strengths. It's still pretty good though.

After that we are off all over the place. The cotton-picking Osborne Brothers don't appear remotely hurt, scarred, wounded or even marred; James Last smothers the pain with cheese; and then there is... erm... a Spanish rap version. Thank goodness for the always reliable J.C. Lodge, whose Mandatory Reggae Version sounds exactly like you would expect.

Very saddened to learn that the great U-Roy passed away a couple of days ago. He may have left us but he shall never be removed. RIP Mr Beckford.

Last time out I made mention of the appalling food pun based cover of the old Island Records sampler "El Pea". Gasp at the full horror. 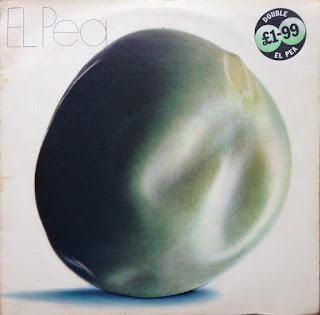 "El Pea" was a formative album for me. It came out in 1971 but towards the end of the decade, when I first started getting seriously into music, it could be found in charity shops almost as regularly as the works of James Hadley Chase. It is through "El Pea" and "Bumpers", another Island sampler of similar vintage, that I first discovered Sandy Denny, Nick Drake, Fairport and many more artists who became life-long favourites.
There are all sorts of big names on there - Traffic, Jethro Tull, Mott, Cat Stevens etc - but we are going to feature some of the lesser lights.
"Tomorrow's People - Children Of Today (Excerpt)" - McDonald & Giles
"Sudden Street" - Bronco
"Song for Suzie" - Heads, Hands & Feet
While Head, Hands & Feet had only limited success as a band, they had a pretty luminous line-up. Members included Albert Lee (of Emmylou Harris's Hot Band fame), Chas (of & Dave fame), and Tony Colton who wrote and recorded the original version of this cracking tune.
Posted by Ernie Goggins at 06:57 2 comments:

I have noticed over the years that many album compilers find it hard to resist bad puns when choosing titles. Some even extend the pun to the album cover, like the old Island Records sampler "El Pea", the cover of which comprised a photo of a giant pea. Another example is the one we are featuring today, "Welsh Rare Beat". 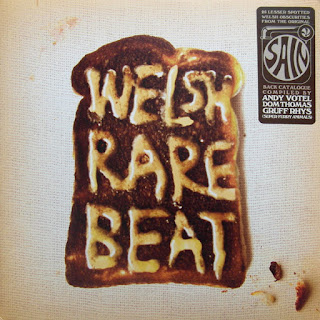 For our non-British readers, Welsh Rarebit is basically cheese on toast. It is considered to be the high point of Cambrian cuisine.

As naff as the title is, the album itself is excellent. It is a compilation of mostly 1970s Welsh language psych, folk-rock and the like that had been originally released on the Sain record label. The compilation and the follow up ("Welsh Rare Beat 2" - why change a winning formula?) are available on Bandcamp, and I would heartily recommend them both.

The original plan was to have some videos featuring some of the other acts featured on the album like Elleri Llwyd and the great Meic Stevens. But then I discovered Brodyr Gregory.

14 February seems like an appropriate day to pay a belated tribute to Hilton Valentine, guitarist with The Animals, who passed away at the end of January. RIP Mr Valentine.

"Baby Let Me Take You Home" - The Animals

Rebels Without A Pause

Today, the Nat Turner Rebellion, a Philadelphia soul band named after the slave rebellion of 1831 (but you knew that I'm sure).

Active from 1969 to 1972, they made a few singles that were compiled with some previously unreleased material on an album called "Laugh To Keep From Crying" which came out in 2019. Think Norman Whitfield-era Temptations without the production budget.

Notorious smoothie-chops Major Harris was in the band for a while, but I don't know whether he features on those tracks. Here he is with his big hit.

Posted by Ernie Goggins at 08:30 No comments:

Day of the Jackal

Today we bring you the groovy sounds of Big Jackal & The New Cream - or, as they were better known to their many fans, Chacalón y la Nueva Crema. The same fans also referred to Chacalón as 'the Pharaoh of Chicha music'. His dear old Mum referred to him as Lorenzo Palacios Quispe.

Chacalón and the lads were big stars in Peru back in the 1970s, when they were credited with taking chicha out of the ghetto - literally - and into everybody's home. And they did it with a great deal of fuzz, buzz, pizzazz, razzamatazz and other words ending in 'zz' (but fortunately not jazz).

Apologies about the quality of the video; the few others I found were in an even worse state. To make up for it I've added some modern chicha courtesy of Chicha Dust. They are actually from Arizona not Peru, but don't let that put you off - they're very good.

The Delmore Brothers were country music's first major brothers act. They were stars of the Grand Ol' Opry way back in the 1930s when the Louvins and the Stanleys were still in short trousers and the Everlys were still a few years off arriving.

Both the Louvins and the Everlys subsequently covered their "Blues Stay Away From Me", as did just about everybody else - everybody apart from reggae artists, that is, otherwise I'd have saved it up for a Single Song Sunday. Anyway, here's the original.

"Blues Stay Away From Me" - The Delmore Brothers

I've had a subscription with eMusic for 15 years. It is probably not worth signing up now as it is no cheaper than most other download sites and most US and UK record labels refuse to license anything to them, due to past problems with poor payment it seems.

I stick with it for two reasons. One is that there is a huge amount of stuff from all over the world on there. The other is that I'm on the same package I first signed up for which means I now get 40 tracks a month for about £7. At that price, it would foolish to forego the opportunity to expand my musical horizons.

Which I why I have been acquiring a lot of old Slovak pop recently. Some bright spark has reissued the back catalogue of the former state-owned Bratislava based Opus label and there are lots of gems among the dross.

In particular, the 1970s and early to mid 1980s seem to have been a vintage period for female singers in Slovakia. Here is a small selection to see you through the weekend.

Of Zeitgeist And Ziggurats

As a surfer of the zeitgeist I am in the fortunate position of being sent lots of new music, far more than I ever have time to listen to, which means something about the email has to catch my eye if I am going to investigate further. Sometimes its the artist, sometimes its the label, and sometimes its the promo pitch.

For today's selection it was definitely the latter. How could I resist a press release that starts: "The title of the new album is taken from the name of a Babylonian ziggurat that was constructed with the aim of reaching the heavens and is thought to have inspired the story of the Tower of Babel"?

When it then went on to say "It is a concept album on which each song is told from the perspective of a mythological creature of the artist's own invention" I was hooked. And even more hooked when I listened to it.

The album in question is "Etemenanki" by Kate Koenig. She describes her style as 'experimental folk', which sounds about right to me.

I know what you're all thinking: "Not that old chestnut again! Does the world really need yet another concept album about Babylonian ziggurats and mythological creatures?". Well I'm here to tell you that it does.

It is mostly an acoustic affair, but with some restrained, atmospheric arrangements that work really well with Kate's voice, particularly on the title track and "Fell To Stone", the first single. The latter has a bit of the feel of The Roche's "Hammond Song" when Robert Fripp noodled away in the background to great effect. It does it me anyway.

The album is available now on Bandcamp and Spotify. You can also get hold of Kate's previous album "Haircuts for Barbers" on Bandcamp.

Here's the lyrics video for the title track. You may get a message saying that the NFL has blocked its use on this application, but if you click on "Watch on YouTube" it works fine.

For me the only downside of preparing this post is that the regular repetition of the word "ziggurat" has got it stuck in my head, and I find myself incessantly singing it to this old Dave Dee rune. But even that isn't really a downside.
Posted by Ernie Goggins at 06:13 No comments:

Listen To The Lion

Hopefully it will be again soon. Hang on in there, folks, and may all your skanking be easy.

"Chant In A Dance" - Lion Youth