Blame It On The Bogle

In real life I have the great pleasure of working with my sometime sister-in-law Pam (it's a long and confusing story). Pam has two real lives - one with us and the other as one-third of top female reggae harmony group, True Identity. After years of backing the likes of Marcia Griffiths, Dennis Alcapone, B.B. Seaton and others too numerous to mention, the ladies are finally releasing a record of their own. The launch party is on 30 June, and you can book your tickets by clicking here. I would advise you to book early as they are going quickly.

Pam and I had a fit of the giggles yesterday when we had a meeting involving a Mr Bogle. For those of you too young or too square to remember, the bogle was a reggae dance craze that swept the nation in the early 1990s. The mental image of the eminently respectable, and very white, Mr B bogling and carrying on as if he were Buju Banton was what set us off.

But you never know, maybe it was his sort of thing twenty years ago. For such was its popularity that as well as the likely suspects like Red Dragon and Ninjaman, there were plenty of old school acts like the Mighty Diamonds getting up and having a go.

If you don't know the dance, here is a gentleman talking you through the "foundational movements" of the bogle.

Here's a rather more entertaining - yet still instructive - reggae dance video. All together now: wind your body, wiggle your belly, dip and go down in the new stylee...

Posted by Ernie Goggins at 22:05 No comments:

For no good reason, we are long overdue a round-up of releases sent to me through the ReviewShine service. Let's put that right.

First up is Deborah Holland with her new album "Vancouver", out on 4 June on RageOn Records. She is a new name to me, which does me no credit at all as she has quite a pedigree, having played with Stanley Clarke and Stewart Copeland in Animal Logic among other things. The new album is more rootsy than that. It is a strong all-round set but the two tracks that stood out for me on first listen were the title track and this one, both of which have the ring of true stories.

We follow that with some more "veterans" I had never heard of before. Fiddleworms have apparently been around on and off since 1995. Their new album, "See The Light", is definitely more on than off. They describe it as a mixture of Southern folk music, Muscle Shoals R&B, the Beatles and sixties psychedelia, which sounds about right. They are from Muscle Shoals so that influence is not to hard to understand, and it's the more soulful and mildly funky tracks that I like the best.

The title track is the one that stands out most immediately, but before you listen to it I should the repeat the "FCC Notes" that came with their blurb: "Ass is in "100 Watt Suicide Drinker", Bitch is in "Johnny Rotten Cash", Shit is in "See the Light"." You have been warned.

Also mixing a bit of soul in with the country, at least through the emotion in her voice - the tunes are fairly straight country - is Sara Petite. Yet another name new to me, "Circus Comes To Town" is her fourth album. As with Deborah Holland, there are a lot of good songs here, but it is her voice that makes the album stand apart from the competition. I suspect it may not be for everyone, but for me it is like a mix between Lucinda Williams and Iris Dement, which can't be a bad thing.

Finally, someone familiar - well, sort of. Jesse and Noah Bellamy are the sons of one of the Bellamy Brothers, a duo who have always been high on my list of not-so-guilty pleasures. By an amazing coincidence, they are also the nephews of the other Bellamy Brother! There are times on their newly released third album, "Driven Back", when you can detect the influence of their Dad and uncle - "Florida Water" for example. But they cover the whole spectrum of country music, from trad to alt, and do it all well. Today's selection is not particularly typical but it's bloody good.

And for today's vintage video clip... come on, who else is it going to be?

Our local, the Eleanor Arms, has recently - and rightly - been awarded the title of best pub in East London by Camra. Frankie, Lesley and Keely are the perfect hosts, and along with the fine beer and the convivial company you occasionally get some live music. Mostly it is jazz, which is not really my thing, but there is a potentially cracking gig coming up in a couple of weeks.

On Saturday 8 June the Dad Horse Experience will be performing there. Long-standing readers may remember we featured his distinctive German country gospel sound here a couple of years back when his album "Dead Dog on a Highway" came out, but if you missed it there is a taster below. The gig is a snip at £3 only. You should try to get down there. I'll be there if I get back from Bucharest in time.

Last night, for the first time I can recall since I have been going there, I witnessed someone being politely removed from the pub. The lady in question's attempts to ingratiate herself with Frankie had been a little too enthusiastic for his and Lesley's tastes. The remaining songs are dedicated to her.

"Keep You Hands Off My Baby" - Little Eva

Those of you hang round here may remember me doing a feature on the great Gary Stewart a couple of weeks back, and then a few days later mentioning I was off to see Hiss Golden Messenger at Cafe Oto.

Well, you can imagine my surprise and delight when Yer Man Messenger covered Gary's "Drinkin' Thing" for an encore. Fortunately I had my wits sufficiently about me to capture the moment for you all, and here it is. The man providing tasty guitar licks, and almost entirely obscured by the traditional Cafe Oto gloom, is William Tyler (the support act and well worth seeing in his own right).

Their other encore was an equally good cover of "Bright Phoebus" by The Watersons. So naturally today you are getting a couple of Watersons' tracks, both from 1975's "For Pence And Spicy Ale" and the first very topical. Plus an epic tale from Mr Norma Waterson.

"Swinton May Song" - The Watersons

The Bums Of Wexford

Morning dudes and lady dudes. I'm back from a week in Moscow, Dublin and Wexford. I did not have time to go music shopping in the first two, but while trawling through the charity shops of old Wexford town I came across a 1998 EP by a local band called D'Harma Bums. We give you the lead off track.

As a bonus I have added a few more recently acquired treats for you. In order, they are: some Thai and Bulgarian pop, some German hip-hop (requested by Mr F), and a Greek singer-songwriter of my acquaintance.

Other musical sons of Wexford include the mighty Pierce Turner and the unfortunate Ryan Dolan, whose last place in Eurovision this weekend was a travesty. He deserved more points for the giant drums alone.

Posted by Ernie Goggins at 07:12 No comments:

All Over The Place

This will be the last you'll be hearing from me for ten days or so - stop cheering, it's not nice and nobody is forcing you to read this rubbish.

Anyway, there are multiple reasons for my impending radio silence. Tomorrow night we are off out to see William Tyler and Hiss Golden Messenger, which I'm looking forward to greatly. Then I head off to spend 24 hours in Moscow, followed by 48 hours in Dublin - both for work - before a relaxing long weekend in Wexford. That's where my people come from (on my mother's side, not the Goggins line, the Gogginses are all over the place).

So here is one each from the two performers at tomorrow's gig, followed by something from Russia and something from Ireland. Think of it as a virtual tour. At the end I have tagged on two tunes that have nothing to do with anything, but I have been grooving to them both today. Maybe you will too.

"Thula" - Ringo (not that Ringo, the South African one)

This is that Ringo 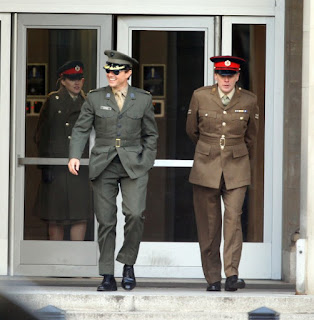 Tears In Your Beer

Since George Jones died recently I've found myself listening to him a lot, and also to the only two men who are in the same league as him when it comes to cheatin' and drinkin' songs - Merle Haggard and Gary Stewart.

Merle you will know, but it is possible you may not be familiar with Gary. While more of a rocker than the other two - on one album he was backed by the bulk of the Allman Brothers - it was with good reason he was called "the King of the Honky Tonks" when at his peak back in the 1970s. And like George Jones, he lived the live of which he sang.

Gary has been dead nearly ten years. He shot himself a few days after his long-suffering but much loved wife Mary Lou was taken by pneumonia. We still miss him.

"Out Of Hand" - Gary Stewart

"I See The Want To In Your Eyes" - Gary Stewart

Speaking of Gary's, the great Gary Johnson has today lead the mighty Yeovil Town to the play-off finals. Unfortunately I won't be able to get to Wembley as I am away, but I'll be scouring Wexford in the probably forlorn hope of finding somewhere showing the game.

For reasons unclear even to myself, this ones for Jamie McAllister and the lads.

After lingering most of the week in Mozambique, we are heading vaguely homewards, stopping off first in Greece, where they are celebrating the Orthodox Easter. Here is some excellent garage/psych revival courtesy of Purple Overdose and their great 1988 album, "Exit #4".

As a Bank Holiday bonus, here is some more garage/psych purplosity - but from the first time round.

"Voices Green And Purple" - The Bees

And you can't really have a purple post without His Purpleness, can you? But we're not going for the obvious one.

We are going to stick with Mozambique for now, and introduce you to the music of the late Zaida Chongo. A big star in the 1990s in collaboration with her husband Carlos, she died in 2004 a couple of weeks short of her 34th birthday.

According to a mangled translation of an article in Portuguese on Wikipedia, "at one point marital disagreements and internal conflicts begin to take care of the couple when Zaida starts to get carried away by excessive consumption of alcoholic beverages", and it was this that led to her untimely demise.

Zaida was born in Xai-Xai in Gaza Province in southern Mozambique. The largest ethnic group in that province are the Shangaan (aka Tsonga). I'm not sure that I can technically justify labelling her music Tsonga Disco, but you'll spot some similarities.