I'm heading off in a few hours to see some branches of the Goggins clan that I have not been able to see since before all the silliness started. I'll be back here in mid-December.

Where am I off to, you ask? Well, it's none of the places mentioned in these songs, but if you look closely at the running order there's a not very subtle clue.

See you in a few weeks. Stay groovy in the meantime.

I recently picked up a copy of "If I Were A Carpenter" as part of a 'three CDs for £1' offer in a local charity shop. Its a Carpenters tribute album released in 1994 by their record label A&M in order to milk the cash cow as much as they could celebrate the artistry of Richard and Karen.

There is a strange selection of artists on there - from Sheryl Crow to Sonic Youth to Shonen Knife (see below) - and inevitably it is a bit of a mixed bag. It does have its moments, while at the same time feeling a bit pointless without Karen's wonderful voice.

"Top Of The World" - Shonen Knife

Here's a bit of the real thing. Watch out for the tambourine player who dances as if he were St. Vitus himself.

On Saturday night me and Mr F tootled off to see Derya Yıldırım & Grup Şimşek play live. Very good they were too, you should check them out if they are round your way. Derya and the gang are touring at the moment to promote their new album "DOST 1", available at an absolute bargain price of only €7 at Bandcamp. 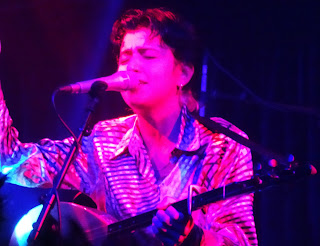 We've got a track from their previous album "Kar Yağar" (2019) for you, together with tunes from a couple of other Turkish acts who I have been lucky enough to see live over the years. We round things off with videos from some of the giants of Anatolian rock, some of whom featured in an excellent set by the support DJ om Saturday night.

Derya has had her hair cut since this video was taken but appears to be wearing the same shirt. Maybe its her lucky gigging shirt.

We round out the week with the help of David Sinclair, better known to his friends and fans as Tapper Zukie. Here are a couple of tip top tracks from his 1978 album "Peace In The Ghetto".

Somewhat unexpectedly it turns out that Belle & Sebastian are major Tapper Zukie fans, hence this tribute they wrote for him. Apologies for the typoin the title of the video.

In the unlikely event that you don't share Belle & Sebastian's enthusiasm for Mr Zukie, perhaps you would prefer something featuring a different David Sinclair, the keyboard player in Caravan.
Posted by Ernie Goggins at 06:07 4 comments:

On Monday we featured a modern artist partly inspired by the French yé-yé pop of the 1960s. Today we have one of the original performers, albeit one who had a bit more oomph to her sound that most of her contemporaries. Ladies and gentlemen, please welcome Ms Jacqueline Taieb...

Here is Jacqueline with her super cool debut single (and biggest hit).

I am not sure the world is necessarily waiting for a yé-yé revival, but if there is going to be one it will be led by Lia Pamina.

Lia is a Spanish singer who has been releasing records on the Elefant label for about five years now. That is the home of the likes of Camera Obscura, and you will be able to spot some stylistic similarities. Here are some representative examples from her charming oeuvre.

And here are some of the original yé-yé girls to brighten up your Monday morning even further.

We haven't heard any hardcore honky-tonk on here for ages. Let's put that right with a couple of the all-time greats and a young pretender, one J.P. Harris. J.P. is perhaps a bit too chirpy to stand comparison with George and Gary, but if he is blessed with a few more years and a truly wretched life he may get there.

J.P's 2018 album "Sometimes Dogs Bark At Nothing" - from which today's track comes - is available on Bandcamp and well worth a listen.

A marvellous musical mélange for you today, courtesy of Sergent Garcia and his/ their 2011 album "Una y Otra Vez".

I am not completely convinced that the Sergent is an authentic military man - I don't imagine you would find many salsamuffins at Sandhurst, for example. But maybe the world would be a better place if there was.

Now here's a proper Seargent for you.

Posted by Ernie Goggins at 07:11 No comments:

After yesterday's "In The Midnight Hour" extravaganza I thought that we would stick with Wilson Pickett a while longer. But I haven't got enough energy left for another one of his rambunctious numbers, so here are a couple of slower songs. "What Good Is A Lie" is one of the saddest things I know.

"What Good Is A Lie" - Wilson Pickett

Now here is a thing of wonder for you - 15 minutes of Wilson live at Montreux in 1973.Its a toss up between his suit and the bongo player's hair for the most outrageous contribution. Look out also for a guest appearance by Edwin Starr and a guest non-appearance by the Rolling Stones.

In our previous post we featured a couple of tracks from "Super Eight" by George Faith. One of the other tracks on the album is George's take on "In The Midnight Hour", a song that has been covered approximately 3.4 million times. Its induction into the Single Song Sunday Hall of Fame is long overdue.

We start, of course, with the original and really the only one of those 3.4 million versions that you need. Being such an iconic record I had always assumed it was a massive hit when it came out in 1965, but in fact it only made it to No. 21 in the Billboard charts.

We round things off as always with the Mandatory Reggae Version, or Versions in this case. We'll skip the George Faith cover, as good as it is, to bring you two other versions both of which can be found on a very good compilation called "Duke Reid's Treasure Chest" - a straight cover from the Silvertones and then the late great U-Roy doing his thing over the top of the track.

"In The Midnight Hour" - Wilson Pickett

"In The Midnight Hour" - Cross Country

"In The Midnight Hour" - Roxy Music

"In The Midnight Hour" - Mitch Ryder & The Detroit Wheels

"In The Midnight Hour" - The Jam

"In The Midnight Hour" - Machito & His Orchestra

A classic Lee 'Scratch' Perry production for you today. It is one of his less bonkers ones, but none the worse for a bit of restraint.

The album is question is 1977's "Super Eight" and the singer is Mr George Faith. Here are a couple of the many highlights, in which George asserts that he has not only love but the groove as well.

"All The Love I've Got" - George Faith

"I've Got The Groove" - George Faith

Other Faiths are available.

Down The Lazy River

The Nile Project is an initiative that aims to bring together people from the countries that the river flows through to collaborate and to help keep the river sustainable. I say is, it may be was - the website has not been updated since 2017 and their social media accounts seem to have stopped as well.

The most visible of its activities is a loose collective of musicians from the region, also known as The Nile Project. They have produced three albums to date. Today's selections come from "Jinja" (2016). The first features Selamnesh Zemene from Ethiopia, the second Michael Bazibu, Sophie Nzayisenga and Steven Sogo from Uganda, Rwanda and Burundi respectively.

"Ya Abai Wuha" - The Nile Project

Other Niles are available.

Some typically mellow early 1970s singer-songwriter stuff today to help you ease your way gently into the working week. The sort of thing you associate more with Laurel Canyon than the Tees Valley. In this case you would be wrong though.

Lesley Duncan was born in Stockton-on-Tees in 1943 and sadly left us in 2010. In between times she made a string of pop singles in the 1960s, some grown-up albums in the 1970s, sang backing vocals for everyone from Dusty Springfield to Pink Floyd, and wrote a little song that was covered by the likes of David Bowie, Barry White and Dionne Warwick among others. Then at the end of the 1970s she packed it all in and moved to Mull.

Her debut album "Sing Children Sing" hit the shops in 1971 and in my view is a particularly fine example of the sound of the times. Take it away, Lesley.

"Sunshine (Send Them Away)" - Lesley Duncan

Lesley's little song was "Love Song", and this is probably the best known version. I prefer hers.