Checking the blog today I found in the comments under my most recent post the following message from a George: "Never mind this, we need more German cover versions of Carole Bayer Sager songs".

I can't quite decide whether or not he is being sarcastic. If he is, then he deserves what is about to follow. If he isn't, he might actually enjoy it. It is some vintage Czech AOR courtesy of Michal Prokop & Framus Five. The first track is taken from their 1980 album "Holubi Dante" (which if Google Translate is to be believed means "Pigeon Dante"); the second was a single the previous year. Close your eyes and you can almost see the yachts on Černé Jezero.

Today's clip is by way of a tribute to one of my childhood heroes, whose death was announced earlier today. John Noakes RIP.

We have had some glorious weather in London over the last few days so, in keeping with the mood, here is some sunny music from a sunny place - Cameroon, to be precise.

Hopefully the sun will continue to shine on the righteous at Wembley this afternoon. I'll be there keeping an eye on proceedings.

It's Wednesday, which means it must be "1970s Hits Reworked Only Partially Successfully In The 1980s By Moody Germans" Night. This week: Ulle Meinecke

This video of Ulle in action from 1983 is wonderfully evocative of its time. The bloke in the mustard coloured trousers steals the show.

Posted by Ernie Goggins at 22:16 No comments:

We haven't done one of these for a while, but we're back with a bang. A smooth and subdued bang, admittedly, but a bang nonetheless.

"Then You Can Tell Me Goodbye" is one of the many fine songs written by John D. Loudermilk. It was first recorded in 1962 by one Don Cherry - judging by the rather decidedly square sound, I'm guessing not the trumpet tootling jazz improvising father of Neneh and Eagle-Eye of the same name. But it wasn't a hit until The Casinos took it into the Top 10 in the US in 1967. Eddy Arnold then had a number one country hit with it the following year.

We kick things off with those three for form's sake, but they are probably my three least favourite versions out of today's selection. The possible exception is the version by The Puddle. They are from New Zealand, this track is from an album released on Flying Nun Records called "No Love - No Hate", and I can't work out which of those best describes my feelings.

The other six versions (technically five and a half as Glen Campbell does it as part of a medley) are all excellent though. If forced to choose only one I would probably go for Bettye Swann, narrowly ahead of Barbara Lynn and Solomon Burke, but Gene & Debbe's pop-country crooning is a pleasant surprise. The Mandatory Reggae Version comes courtesy of Gene Rondo, who in a further case of identity confusion is presumably not Debbe's partner.

"Then You Can Tell Me Goodbye" - Don Cherry

"Then You Can Tell Me Goodbye" - The Casinos

"Then You Can Tell Me Goodbye" - Eddy Arnold

"Then You Can Tell Me Goodbye" - Bettye Swann

"Then You Can Tell Me Goodbye" - Barbara Lynn

"Then You Can Tell Me Goodbye" - The Puddle

"Then You Can Tell Me Goodbye" - Solomon Burke

"Then You Can Tell Me Goodbye" - Gene & Debbe

"Then You Can Tell Me Goodbye" - Gene Rondo

And here is another very nice rendition to finish things off.

The Sound of the Underground

Vintage soul fans out there might want to check out a series of compilation albums called "Underground Oldies". Originally issued 15 to 20 years ago, they are now available on the likes of Amazon and eMusic. There are at least ten volumes for you to work through, maybe more.

As the name of the series suggests, the focus is on rare and hard to find singles from the 1960s and 1970s. It is not wilfully obscure - they feature plenty of artists you might have heard of, like Gene Chandler and Billy Stewart, doing songs you probably won't remember - but of course it does include its fair share of one or no hit wonders. Like these three.

"Ooh I Love You" - The Electrifying Cashmeres

"(Lord) Send Me Somebody" - The Green Berets

"(Lord) Send Me Somebody" got the Green Berets to No. 31 in the Billboard charts in 1969. Shortly thereafter - with a certain grim inevitability - half the members of the group got drafted, and that was effectively the end of their career. Whether any of them ended up joining their namesakes I don't honestly know, but if they did you can be sure they will have done Uncle Sam proud.

Posted by Ernie Goggins at 20:02 No comments:

I was in the Isle of Man last week for work, but had a bit of spare time to see the sights of Douglas. That didn't take long, so I popped into an excellent old school ramshackle charity shop - Manx Mencap in case you're in the area - and happily browsed their wonderfully odd selection of books and CDs instead.

My prize acquisition was "50 Jahre Jodlerklub Bärgfriede, Gstaad". Released in 1993, as the title says it was recorded to celebrate the 50th anniversary of the aforementioned Jodlerklub. The lads - and they are all lads - had to trek over to far distant Oberbottigen to record it, but it was well worth the effort.

Half of the tracks are instrumental versions of what I assume are Swiss folk tunes, performed by the club's stalwart band, which comprises three accordion players, two clarinettists and a man on the double bass. The other half of the record is devoted to choral yodelling. It is an acquired taste, and I think I am unlikely to acquire it, but it is probably the most peculiar sound I've heard since I got that Mongolian throat-singing pop album - a track from which I have included for comparison's sake.

If you are a yodelling fan - and who isn't? - then like me I am sure you were cheering on the Romanian entry in yesterday's Eurovision Song Contest. I find it frankly inexplicable that it didn't sweep to victory.

The erudite amongst you will have worked out immediately that the title of today's post is Swedish for "Of Books and Shoes" (sincere apologies to The Swede if that is not in fact the case - blame Google Translate).

And that in turn will probably lead you to think that you are going to be treated to some fine vintage Swedish psychedelia courtesy of Gothenburg's finest, The Tages.

Look, you were right!

"I Read You Like An Open Book" - The Tages

"I Left My Shoes At Home" - The Tages

Given the title of the first track, this seemed singularly appropriate for today's clip.

Oh all right then, here's the other one as well.

We have a fine selection of cowboy-related reggae for you tonight. We start with The Duke, then Messrs Peck and Cotton recreate their duel in the sun, before we head into the Eastwood section and round things up with one of the most memorable theme tunes ever made.

"No Touch The Style" - Joseph Cotton

And representing the opposition...

What The Fussell Is About

Earlier in the week I ventured up to darkest Dalston to see the exotically named Jake Xerxes Fussell at the hipster hangout that is Cafe Oto. Physically he definitely looks more like a Jake than a Xerxes, as I feel this photo shows. 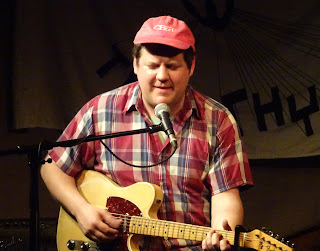 Musically he specialises mostly in what our American friends might call "old-timey" music, but he does it in a very sprightly and appealing way. His new album, "What in the Natural World", is well worth getting hold of. This track is actually from his self-titled debut album and was one of the highlights of his performance; as was a very nice rendition of Allen Toussaint's "Freedom for the Stallion". Nobody does that quite like Mr Dorsey though.

Today's clip is dedicated to the peculiar Emo Phillips/ Freddie Garrity hybrid who kept trying to block Mister F's view of the support act. It is a marvellous video but - and I can't emphasise this enough - it is for research only.